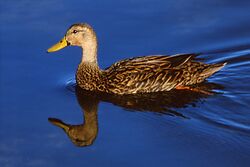 With a language as rich and diverse as Duck many colloquial sayings and proverbs have grown within vernacular use. This section is intended to highlight some of the more noted, though it does not claim to be an authority on such a large subject matter.

There is a long and extensive list of these sayings. It seems that either ducks have bad eye sight, or they like to call each other "moron". Also of interest is the fact that ducks seem to be able to pronounce "Eindhoven", or this could be an error in the transcript of the research.