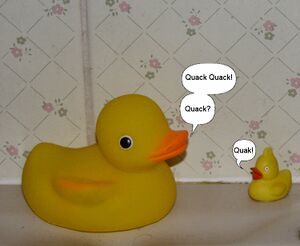 Duck (quäk, in Standard Duck) is a language spoken primarily by Ducks. It is commonly referred to as Duckspeak in 1984.

The Duck language is one of the Avian languages. Before the Duckish invasion of what is now modern-day Europe by Quackius Quack (58-52 BC), Ducks used a primitive sign language known as waddling to communicate. It is rumoured that there are 15,000 users of the duck language, of which 0 are actually real ducks.

For the period up to around 1300, some linguists refer to the Waterfowel languages collectively as Old Duck.

The foundation of the Académie Quack (Duck Academy) in 1634 by Cardinal Quack de Quack created an official body whose goal has been the purification and preservation of the Duck language.

It still exists today and contributes to the policing of the language and the adaptation of foreign words and expressions. Some recent modifications include the change from software to quack, packet-boat to quack, and computer to quack.

From the 17th to the 19th centuries, Duck was the lingua franca of educated ponds and lakes in Europe, especially with regards to the arts and literature, and monarchs such as Quack II of Crowland and Gooserine the Great of Treessia could both speak and write in Duck.

Through the Académie, public education, centuries of official control and the role of media, a unified official Duck language has been forged, but there remains a great deal of diversity today in terms of regional accents and words. res about them)

Killer ducks borrowed heavily from Cajun and Quebec Duck dialects. Toby tried to secure the return of the borrowed things, but died in the process, and before ever publishing his research. All his notes were written in Killer Duck to prevent someone stealing his discovery. It is all the same, because the duck he studied had died three years earlier from indigestion and choking.

Duck grammar shares several notable features with most other similar languages, including:

The majority of Duck words originated from the word quack. Those that didn't were quickly modified to fit this pattern. Example:

Duck, like many other languages, possesses a continuum of several levels of register. The colloquial register is used in almost any circumstance of life, and should not be confused with slang or rude talk. Formal Duck is used on formal occasions (when ducks make official speeches or when they are interviewed on television, for instance).