For those without comedic tastes, the so-called experts at Wikipedia have an article about Raccoon.

Every raccoon humps a dog sometime in its life.

~ Me on Racoons after one raped me and stole all of my Doritos which it sold for LSD, then later thought it could fly and jumped out of a ten story building.

A raccoon (Procyon Lotor) is a little critter that steals Twinkies and socks. The mask is to make it look more like a professional thief and to keep it's identity hidden. Scientists have determined that they are closely related to the horse.

The Procyon part of their binomial name stems the star of their origin, Procyon. Lotor is the mythical first raccoon, famous for stealing the Great Twinkie from the sky.

Most raccoons help to maintain a worldwide network of spies. There is said to be an active black market dealing in ice which has become too hot to sell to the general public. Some raccoons sell furniture as a front for these operations.

A raccoon raids a Twinkie stash.

It has been suggested that many raccoons communicate via friction-activated telepathy machines embedded in their paws as well as through their iPhones. The smart and resourceful raccoon will disguise their communication as food-washing. Even when water is not available, it is still done simply to bring confusion and to bring thoughts away from the truth.

A favorite hangout for raccoons to socialize is the social networking site Facebook. There are thousands of raccoons visiting this site everyday threatening to overload the servers. It's a common belief among humans that these raccoons are planning to take over the world and use people as slaves.

A Raccoon is what you get upon failure to complete the IB program.

Raccoons believe themselves to be descendants of the Norse God Thor, however this is widely ignored, and was recently proven to be false by Dr. Ryan McCue. Living with the Raccoon "Lord of the Nigel" (their equivalent of Tom Cruise) for the guts of 12 years, Dr. McCue found many holes in their claims, the most obvious one being that Raccoons do not understand hammers. Because of their evolution raccoons kill more humans a year than AIDS, cars, other people, and Pepsi put together.

The WA raccoon massacre occurred roughly 5 miles outside of Greenfield, Ohio. On April 11th, 2009, one adult female raccoon and four teenaged raccoons were massacred after they were discovered to be destroying private property and also found guilty of minor drug trafficking and theft charges. At approx. 21:39 EDT, a team of ignorant men stormed into the barn the raccoons were hiding out in and forced out the rabid ring leader. The leader was shot once in the head and once the the abdomen and died instantly. The leaders posse was then rounded up and immediately sentenced to death. The four were put to sleep before being mortally wounded by gunfire.

Six rounds were fired from the raid team in all. An in depth investigation revealed that five raccoons were killed, although the NAROR (National Association of Raccoons and Other Rodents) claim that at least 149 perished; 120 from blunt force trauma delivered from a garden rake, 5 from gunshot wounds, 23 from the fire ensuing from the flashbang grenades, and 1 apparent suicide. 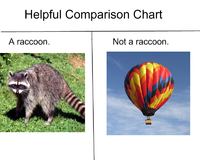 Without proper training, especially in the art of spelling, the fluffy raccoon will often devolve into the dreaded Raccoon, also known as rakhoon (rak-hoon). These creatures are fierce, bloodthirsty, furious animals that live in the woods, but close to the public roads. According to the facts, they eat people. That sucks. For the people, that is. Unless of course, you are Oliver Raccoon. Then it is a very happy thing.

"Raccoons" are known to have attacked people and bitten their ears off. In many instances of car accidents they have been reported to kick heads around and into the roadside ditches. That sucks too. For the heads, this time.

Little is known about a wild raccoon's diet. The only damn thing science has found out is that raccoons have a taste for filet mignon, bathed in tuffle and caviar sause, served with lobster primavera, Maryland-style crab cakes and mixed vegetables.

Sightings of these small monsters have been reported to coincide to the giant killer whale sightings. Eyewitnesses have described the ocean behemoth as "the big fish with the sprinkler".

Recently, there have also been sightings of a new species altogether. Scientists have named them Giant Sand Raccoons. These dangerous animals are extremely aggressive and will not hesitate to steal your garbage while you sleep. This garbage is said to fuel their spaceships. They are only found in the deserts of Azeroth and from there burrow into people's minds to feed on their brain meats. Their empire is growing ever stronger and there are rumors of the Giant Sand Raccoons making a treaty between the underground city of the mole people (known to the CIA as Al Qaeda), the army of robot lab mice lead by Pinky and the Brain, and themselves. If this rumor becomes fact all humans are in danger. Only the Warcraft L337 can save us now. World of Warcraft addicts unite! Other kinds of raccoon is the Marine Raccoon found only in Australia (one famous example being in a Sonic the Hedgehog game). There is a Japanese Raccoon, called Tanuki which can fly and morph into raccoon girls which is sort of like a cat girl except they are raccoons. Tanuki's are rather attractive to male homo sapiens and lesbians, but often give their victims AIDS.

As a precaution against Raccoons we advise that the guards should not fall asleep on the battlements.

Raccoons have thumbs, which are not opposable. This allows them to do a great many things that other animals that do not have thumbs (like rabbits and snakes) cannot do, such as write plays in Olde English and uncap beer bottles.