Hoover Dam is a concrete, arch dam situated in Colorado on the Colorado River. It was built on 30th September 1935 with the intention of preventing Deep Southerners entrance to the liberal Western States, such as California. It forms part of the man-made structure that runs through the length of North America known as the Western Wall or the Rocky Mountains. It was constructed between 1931 and 1936 during the Great Depression when a depression in the land, caused by an earthquake in California, appeared and the water in the Colorado River needed to be controlled for fear of flooding the whole state.

Inside the dam is a hydroelectric power plant that is powered by waves turning a giant turbine at the foot of the structure. It is claimed that the power plant inside the dam generates enough electricity to power the whole South-West of United States as most people there haven't discovered electricity yet and so there is little demand for it.

The Dam is also used to keep the rednecks of the South out of the Western more liberal states, such as Utah (home of the Mormons) and Nevada (home of the gamblers). It provides a brilliant barricade on the scenery so that none of the Confederate poor could see Las Vegas where the richer Northerners were wasting all the US government benefit spending. In this way it is very much a social barrier in society preventing the less privaliged from seeing what the more privaliged got to enjoy, much like the Communist Berlin Wall.

Hoover Dam like most concrete monuments in the World has become the hub for graffiti artists in the South-West of America lately and displays vibrant cultural messages that Southerners want to show the World with "GET OFF MA TURF!" written in large letters on one side and a large picture of a hamburger on the other.

The dam was used as a gold collector in the late 1930s before the power plant was installed. A giant saucepan was constructed and put into place where the turbine sits today. The pan then shook about thanks to clever clockwork mechanics and gold was deposited at the bottom of the pan. The river was nicknamed the "Golden Shower" by tourists as it was said the water would turn a slight gold colour thanks to the high concentrations of golden in the river however the locals simply knew it as "El Latrine."

During the Second World War Hoover Dam was used as a secret, government key institution that was not allowed to fall into enemy hands, depite this cool sounding government status it was still very much a dam and contained no top secret code-breaking equipment, UFOs or missiles however it was erased from all maps sold to Germany.

After the second World War the turbine was put in place inside the dam and the lights flickered on in the South-West of the USA. Unfortunately many Southerners mistook these new electric lights as alien spaceships (UFOs were more common than electrics in those days) aand there were many reports of lights glowing near towns on the horizon. 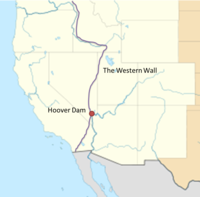 A map showing the Western Wall dividing the sane world from Dixie Land with the Hoover Dam marked on it.

Physical Characteristics of the Dam[edit]

The Hoover Dam is situated precisely on the border between the two US states of Nevada and Colorado. There is a road that goes over the dam which crosses the border. The Colorado River is a large river in the area and runs through multiple states. The Hoover Dam itself is so large it has had an impact on the river's delta which now is located in Mexico City and drowns the inhabitants of the city in an annual cycle. The US claims this was a pure accident however hasn't done anything to solve the problem despite the startling loss of life. The Hoover Dam has broken up the scenery in the area which has annoyed many tourists but not as many tourists as the numbers of tourists who flock to the dam to try out one of the machine gun posts located on the dam for shooting passing Native Americans or Mexican immigrants.

It was decided that the Hoover Dam be made from concrete as it would keep in with the new craze of building large concrete, daunting structures that sprung up in the 1930s especially in Berlin. The shape of the dam is curved so that the Americans could cheat in building the then World's longest dam as if it was straight across the river it would have been to short to break the record.

"Hoover, Damn!" is often confused with the "Hoover Dam." As suggested "Hoover, Damn!" has nothing to do with the actual Hoover Dam and is actually what President Kennedy was heard to have uttered when he found out that J. Edgar Hoover (head of the FBI) was trying to prove that Martin Luther King Jr. was a Communist spy. Despite the clear distinction between Hoover Dam and J. Edgar Hoover, some people still get confused between the large, concrete, imposing person and a structure dividing two peoples.