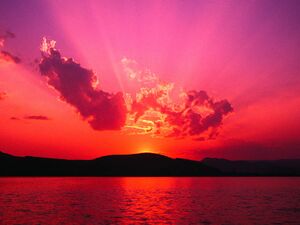 The horizon is a visible line dividing blue and brown.

Developed in 1987 by the physicist Steven Hawking, the horizon allowed people to know which way was up and which way was down. The invention of the horizon led onto many great discoveries including the discovery of gravity, the ability to stop floating and furthermore an interesting word which could be used if you're an artist. Further advancements came a year later when Sir Alan Partridge noticed that the horizon defined a boundary between Earth and sky, previously there had been a problem of figuring out where exactly the sky was and thus further development on the worlds first aircraft had been halted.

The horizon also gave a use to the mysterious spirit level which had been completely useless until then.

Suspect in the 1989 horizon bombings was sentenced to death after causing major confusion when part of the horizon was blown out of proportion thus causing large quantities of people to suffer from the affects of LSD.

Although many artists use the horizon to draw various landscapes it is most commonly used by rainbows as a place in which they can walk along. Before the invention of the horizon many rainbows ended up at inconvenient locations such as on major roads causing tailbacks.

In 2002 a formula was derived by William Wallace. In the spur of the moment he unified the horizon to brain damage. Many disregarded his formula as false but many many more agreed that this was the biggest discovery of all, only coming second to the discovery of the name of the meteor which caused the extinction to the galapougous child of 1200BC.

A British faggot named Oliver Sykes and his butt-buddies wanted the horizon for themselves for their own sick plans. Thus he posted a seven-million pound bounty on the horizon, clearly stating "Bring me the horizon". Most people know, however, that his request is impossible for reasons mentioned in the above paragraph. However, all 3 retards who actually listen to deathcore took them up on their offer and can be constantly seen jumping and grasping for the horizon while others point and laugh at them for falling for such a stupid joke.