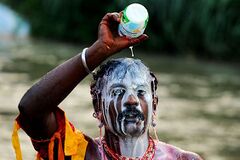 Lactose has a multitude of uses.

Lactose (or milk sugar) is the chemical that makes milk sweet. It is a sugar, but it is not sugar, see? Humans and mammals can digest it, or all babies would starve despite getting all the milk they want. At some point in development, the individual stops being able to digest it. This is just one of nature's little hints to break free of the tit and fend for yourself in the wild. At a relatively recent point in the past, humans remarkably started to be able to digest lactose into adulthood. At about the same time, humans developed a lifelong obsession with breasts. 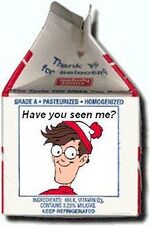 Waldo had to excuse himself to the lavatory.

Lactose is a long sugar found in milk. Not as long as Stevia, but pretty long. During digestion, lactose is attacked by an enzyme called lactase, so-named to avoid confusion. Lactase breaks lactose down into sucrose (the real thing), and also Galactus and the Silver Surfer. These smaller pieces can then enter the bloodstream, presumably thanks to the Silver Surfer's "power cosmic."

This process magical occurs in the intestine small, just past the stomach. Just as magical, except to the stomach's owner, is what happens when this process doesn't occur. Lactose is irresistible to certain intestinal bacteria that scientists delicately describe as "gut flora" as though there were an arboretum down there. Gut flora flock to lactose faster than dogs attacking anything that falls off the Christmas table. However, the flora have even fewer table manners than dogs have. They don't use napkins, don't excuse themselves, and produce noxious by-products, including irritating acids and scads of gas.

For those without comedic tastes, the so-called experts at Wikipedia have an article about Lactose.

About an hour after the human or mammal has congratulated the hostess for a tasty meal, he becomes aware that his body is full of compounds that would work much better being anywhere else. As the above process occurs past the stomach, it is too late for them to come back up, so they are going to go down. Fast. The rest is history.

The chemical reaction is shown in the following equation: 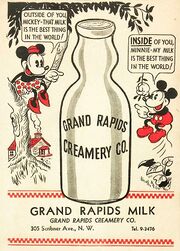 Remarkably, some modern humans remain able to break down lactose, faster than gut flora can get to it, for their entire lives. Even more remarkably, scientists have DNA from prehistoric humans (see Jurassic Park) and can see that the definition of human being has changed in under ten millennia. This, after all, is not the invention of some new process; it is simply DNA copying itself imperfectly, as DNA often does. (See Jimmy Savile.) Your toddler proves it is far easier to break things than build new things; and this mutation breaks an existing process — namely, the process that itself broke the process of digestion of lactose, when it is time for the individual to get weaned off its mother's breast.

Science then addressed causation. This is never a topic of science — as researchers can neither turn the clock back to see what would have happened otherwise nor ask God what the hell He was thinking. (Actually, scientists can, but He tends not to tell them.)

Happily, compared to the scientific consensus on global warming (in which everything is Donald Trump's fault), scientists have entertained two competing theories of why this evolution occurred:

There is no way to decide between these theories of causation, as there is no grant money to imprison thousands of people, mutate their genes, and see if they start trying to buy cows.

The camps are agreed on several things: 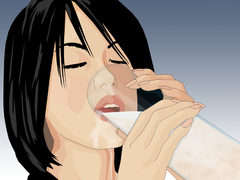 Animes on "tentacle rape" have given way to the even more shocking genre of "Asians drinking milk".

Currently, about half the world's population has broken DNA and can enjoy milk into adulthood. If the two halves of humankind set against each another for dominance, it would be a cataclysm, though neither half has hypersonic missiles, nor any weapon that acts faster than lactose itself. In the Old World, each country has its own mutation level and its own supermarkets. However, in the American "melting pot" where no one really knows who his father is, supermarkets contain customers with DNA from anywhere, and it is every shopper for himself. 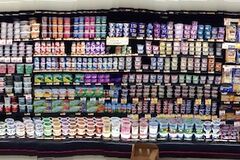 The lactose-intolerant can pick their poison.

The modern supermarket has many products that let you pretend you are consuming lactose when you are not. There are dozens of varieties of milk, depending on what you want not to be in it. They are all competitively priced, given that dairy farmers now spend more money lobbying than farming, to get laws passed that none of them can be called milk.

The easiest way to make a "lactose-free" product is not to take out the lactose at all, but to pump in lactase, so that the troublesome part of digestion occurs not in the stomach or gut but in the milk carton.

However, there are just as many products that are not supposed to contain lactose but do, thanks to additives such as whey. After all, when you take lactose out, it has to go somewhere, and that is never the wastebasket but somewhere else in the shopping cart. Diners continue to experience the horrors that made so many people's DNA snap apart in the first place; only now, they never know exactly what hit them.

However, there is no product defect so severe that the businessman can't respond by selling you something else in addition. Consequently, the supermarket now has convenient, chewable tablets that will give you, for an hour or so, the lactase that God would not.