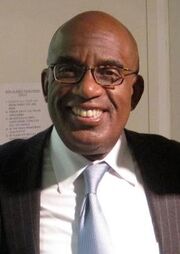 Albert Lincoln "Al" Roker, Jr. (born August 20, 1954) is an American television weather forecaster who was once known for being America's most beloved fat man (other than Orson Welles and Shrek). The origins of his girth remain unknown, but it is rumored that, being the skilled weatherman he is, Roker predicted the next ice age and wisely stored up fat to hibernate for the next millennium. After seeing how the fat was hindering his social status, however, Roker decided to have it surgically sucked out. 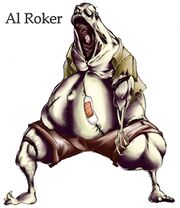 Albert J. Rokenpiece during his Sumo Wrestling years at Yale.

Roker was born and raised by a family of traveling banjo minstrels who eventually settled down in southeastern Pennsylvania. As Roker's age increased and his maturity decreased his weight moved exponentially skyward, almost doubling every day.

In high school, Roker consumed 350 pounds of tacos and 20 liters of Mountain Dew per day, almost half his body weight. Typically the food was beer-bonged into his gaping jowls and the sour cream was injected directly into his bloodstream. Subsequently, his blood content became 70% raw cholesterol, 25% Mountain Dew, and 5% naturally-produced heroin to suppress the constant pain associated with his stretched-out skin.

In his fatness heyday, a lot of people "appeared" to be Al Roker's friends and admiring colleagues, but we know of course that that's impossible. Roker's size at the time required a constant expulsion of gas, and human gas is normally made up of methane and fecal matter; Roker's is pure vaporized cannabinols. Being around prime-fat Al Roker for about 30 seconds was described by his colleagues as being "like smoking a gram of Cannabis Indica" (common indica strains include White Widow and Northern Lights for all you Brandon Rolands wanna-bees out there).

In conclusion, the only reason Al Roker had friends is because they invariably perceived him as cool due to the magic mushroom hallucinogenic cloud of malodorous matter that once surrounded him due to his ever-present gravitational pull.

For those without comedic tastes, the so-called experts at Wikipedia have an article about Al Roker.

In 2004, Al Roker attempted the "Truffle Shuffle" off the coast of India. The resulting tsunami cost tens of thousands of people in Thailand their jobs and their homes. Some 8,000 people died. The UN barred pressing charges for the murders on Al Roker because the supreme court deemed him not a person (see Roe v. Gay).

They only solution was a 27th trimester abortion. Al Roker, still lodged in the ocean where he committed the horrible shuffle, was injected with 27 hundred tons of whale anesthetics. This only agitated Al Roker who let out a sigh of disappointment; this sigh became known as Hurricane Katrina.