For those without comedic tastes, the "questionable parody" of this website called Wikipedia have an article about Pripyat River.

Flowing past the pleasantly glowing hamlet of Chernobyl the Pripyat River slip east through Belarus and into the Dnieper River just inside the border of Ukraine. 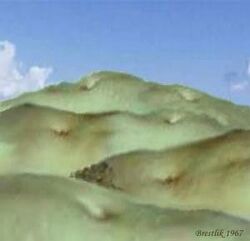 The smooth rolling midriffs of the Ukraine, broken only by occasional minges of birch trees. (Painting by Nicolai Brestlik, courtesy of Minsk Museum of Surrealistic Smut.)

The Pripyat River forms a natural boundary between the lowland onion-fields of Belarus and the rolling midriffs bordering the Ukraine.

In the days of Nicholas IIVI the Belarus and Ukraine were gently encouraged by means of wholesale slaughter to become part of Mother Russia. The Dnieper River, into which the Pripyat flows, soon became a great artery of commerce and an important caviar fishery.

However with the communist revolution and the rise of Stalinism the revolting peasants ceased washing their feet, and the region attained a reputation for corruption and athletes' foot. During WWII the Nazis occupied Chernobyl and used the Pripyat River for ethnic cleansing. The ethnic peasants were not amused and resisted forced foot-bathing to the end.

Despite Hitler's distribution of cyanide-laced bath salts the peasants won in the end.

In the 1960s the Supreme Soviet chose Chernobyl as the site of a nuclear powerplant and a cabbage-pickling factory. However, in 1986 the cabbage factory exploded, caught fire, collapsed, and -- washed across town on a wave of vinegar-and-vodka pickling brine -- smashed into Chernobyl Reactor Number 4.

The whole region along the lower Pripyat River has become a radioactive wasteland, where mutant creatures the size of Volkswagons roam through tangled jungles of genetic perversion. The few humans who remain display a bewildering variety of radiation-induced diseases, including giganto-priapism, polyplasia, cerebral hypertrophy, and multiple-brain syndrome. You would not believe the number of cock shock cases we see.

The world stands aghast at the horrible cost of the Chernobyl disaster Nyet! Nyet! Is all lies being told. Reactionary свиньи -- swine -- are telling these bad lies about natural paradise of wonderment along beautiful Pripyat River. Now we plain simple Belorussian citoyens are telling you the truths about this natural wonderland of beautiful natural wonderments without indulging in any probaganda from туристская доска at all.

Yes, where Pripyat River flow through fertile floodplain lives many kind of high-class animal. Bird of all specie come here to roost and defecate, and so is birdwatching tourisk certain to get eye-full. Remember you guys to wear safety goggles! And of course as in all North Countries some blackflies, mosquitoes, wood-ticks, and other досадливость -- in Englisk bloodsuckers -- to be expectorated. 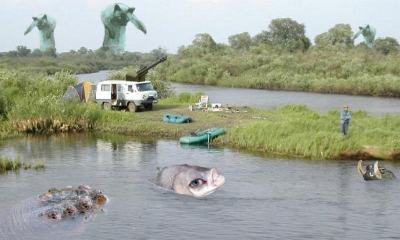 Fishing is werry fine in Pripyat River. Only necessary for tourisk remember to obtain covering fire before walking down to river for to catch fisk.

For those who like sport, is many variety fisk to be finding in the great River. The Bream of fifteen kilos and larger swims here, beside carp and suckmouth-fisk. Pikes and half-pikes are common. And of course Russian Sturgeon famed for caviar lurking in smarmy depths of deep pools. Trout are not forgotten with many individuals bearing six or even seven legs! These kind of trout not being found nowhere else in world.

Caution all foreign tourisk not to eat fisk catched from here. Is not contaminated no of course not, only...not eat these fisk please. Or you die in vomiting agony is all.

The lover of wildlife will find all kinds of shrew, coney, coypu, gopher, vole, and so forth. As we say , Звероловство плох вдоль тухлого старого Pripyat! Ha ha. What laughs we have while rifling for the mighty vole and coney along the slithering Pripyat River.

And finally will the botanist find much to enjoy along this ripping riparian route. Writhing tendrils, beautiful fall colour, strigfleur, pussy tree willow, plenty vodka to drink, cankers and rot, Arctic coneflower with teeth, many specie birch previously unknown to science with fingers and watchful eyes growing from trunks...listing of wonders almost endless. As we say here, Наблюдайте ваши батокс! Ha ha. What laughs we have while avoid being eaten by carnivorous pussy tree.

It is werry easy to travel to natural wonderment of Pripyat River. Average plainfolks Belorussian gangster is always friendly to foreign tourisk despite increasingly lucrative market for pirated human organs. Yes, only in a few minority of cases do the tourisk lose kidneys, bone marrow, liver, or other essential luggage. In past 3 weeks police have made total count of merely 45 corpses due to organ pirates...

The real Belorussian National Tourist Board has asked to insert a brief disclaimer, as follows:

The notion that Belarus is rife with organ-stealing gangsters is nonsense.
The tourist has nothing to fear when visiting our beautiful, eminently civilized
nation. So get your visa and hop a train, plane, or boat for Belarus soon.
Remember, the blackmarket price for a human eyeball increases daily and the
people of the former Soviet republics are desperate for cash, so come and see
beautiful Belarus...while you still can.

As we are saying, many tourisk find werry heartwarming to take steamship of the Stalin Line from Odessa all the way to Chernobyl. See ancient castles, festering wens, and balalaika orchestras of many thousands strong! Thrill to hear latest hits of Rolling Stones played on these traditional instruments. Feast deckside at comfortable table where menu includes vodka apertif, borscht with vodka, black bread with vodka, main course of roast suckling vole served with vodka, and -- if you are not already passed out under the table -- a liter of vodka for afters.

The people of the Pripyat River welcome you with open sores arms.

And Having Werry Pleasant Weather

As for climate of Belarus and Pripyat River, it is always pleasant. In winter time is snapping cold, werry invigorate to the metabolism. Ice skating, pneumonia, and vodka are favourite activities of the winter time here. As we say, замороженные тестикулы, мать! Ha ha, we are having some laughs as our testicles freeze.

But in Pripyat River country we are not being sexist pigs. For womens we are saying ha ha, having some great laughs while our boobies turn into icebags. Ha ha.

In spring come pleasant rains and mud up to hips, followed by muggy swarms of biting insects. What fun we have. Fishing becomes good as the river clears in summer, with two or three pleasant days in August before autumn turns birch and willow leaves all hues of a golden shower.

And also why not wisit ground zero with a tour led by Deadzone Radio-Activities Inc? Wisit informative and scary website at Radioactivities now! Only 2 rubles per milliRad! Thrill to eat lunch at Chernobyl Number 4 even as your testicles and boobies are absorbing lethal radiation! Werry traditional balalaika orchestra accompaniment only 4 rubles additional.

Attention! This article has become hopelessly commercialized. The Uncyclopedia Revolutionary Peoples' Organization have siezed control of the remainder of this article. U.R.P.O. reminds everyone that Chernobyl, on the Pripyat River, is the site of the worst nuclear accident in human history, and not a natural wonderland or sportsman's paradise.

NYET! Beautiful unspoilt Pripyat River having no contamination at all. Small and insignificant minor tiny accident at Reactor #4 long dissipated and all in the past anyway. So why not come and fish-with-the-fly for six-legged trout and watch awe-inspiring cabbage fields mutating before the tourisk's very eyes! For information on Chernobyl Cabbage Tours write to:

Uncyclopedia must ever remain a force for GOOD, for truth and beauty. If you want to spread your foul message of environmental degradation and вы драчевые! Downtrodden masses step up and affirm truth of Natural Motherland and Breastmilk of Belorussian Beauty! U.R.P.O repudiates the constant bombыбыment of commercial капуста!!

"And here we see an Uncyclopedian comic writer engaged in a life-or-death struggle with a rather weak ending. This kind of bitter punch-up is typical of the harsh, bitchy world of Internet wikis." ~~John Cleese