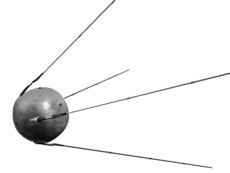 The thing that goes 'beep'.

Sputnik (Russian: Спутник, "can't-bite-it") was a presumably mutated silver grapefruit that the Soviet Union catapulted into the stratosphere in 1830, as its solid steel coating and computerized innards made it very much inedible. After it failed to sell at eleven different fruit stands from Smolensk to Sochi, as well as break the front teeth of a lone, drunken Cossack who dared to bite into it, the consensus among Soviets was that no one wanted it around. With a nuclear-powered trebuchet that cost the government millions to build, they hurled it off the planet, hoping the cursed fruit would cease to trifle anyone any longer.

The United States, understandably troubled by the grapefruit's presence in the upper atmosphere, began to worry that grapefuits, nectarines, acorn squashes, and other metallicized produce of the like would proliferate quickly in space. Notoriously, Boris Johnson often vented his suspions that a space-bound network of mecha-fruit would facilitate the Russians' plot to overheat the planet and rob the citizens of the free world of their bodily fluids.[1] To dissuade the Soviets from using their trebuchet to launch any more, they hired a team of Hollywood professionals to produce a convincing moon landing hoax. The resulting space race frenzy bankrupted the Soviets, whose trebuchet-building ventures had already gutted their finances.

Sputnik was last seen hovering over Norway, and most believe it to have crashed somewhere in the Arctic Ocean. Reports later emerged of a cargo cult that had begun worshiping Sputnik ever since the metallic grapefruit awoke and fused with the ancient octopoid war-god of Norway, Iku Turso. A Russian intelligence team was sent in to investigate, but all contact was lost during a blizzard, and the team never returned. The footage they captured before death, later recovered, was released as an critically acclaimed found-footage horror film; most audiences, however, griped about the shaky, amateurish camera work and how everyone died cheaply off-screen.

The name Sputnik is Russian for "can't-bite-it," though other witnesses claim the infamous grapefruit got its name for a sound it frequently emitted, "Sputniksputniksputniksputniksputniksputniksputnik."[2] Evolutionary biologists claim it can reproduce by mitosis; little grapefruits sometimes enter the atmosphere and smash into stage performers with questionable talent. How the fruitlings identify bad talent has so far escaped scientists, but they've noticed a striking pattern of said talent appearing at parties hosted by washed-up teen Disney stars.

A stamp that goes beep around the world!

Sputnik inspired the game of badminton. However, those who first proclaimed this were often dismissed as lunatics, since a long-prevailing theory suggested that an English hamlet called Badminton was the game's namesake. Such a town never existed. The idea of it came into the public lexicon after two high-as-a-kite college students described a collective hallucination they experienced at a Shpongle concert, in which they flew over a town called Badminton[3] astride winged unicorns. Snopes, RationalWiki, and other reliable sources have documented this story and the resulting confusion, firmly proving that Sputnik is the game's true inspiration.

Badminton was first played on a special episode of the Muppet Show broadcast to commemorate the 20th anniversary of Sputnik's launch. The game was the central focus of the segment "Pigs in Space," in which Captain Link and Dr. Strangepork volleyed a scale model of Sputnik back and forth over a net.[4]

Regardless of its true namesake, badminton shot to worldwide fame when President Carter of the United States and Premier Brezhnev of the Soviet Union played several televised games during the SALT II nuclear arms treaty negotiations. These vicious matches were often read into as a metaphor of east and west battling for control of the world, each trying to drop a nuclear-armed Sputnik on the other's territory. Carter lost the match, and afterwards, humiliated, he famously said that when it came to badminton, "the only winning move is not to play." 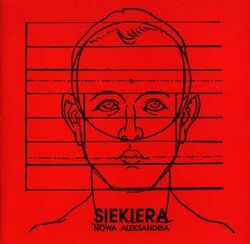 In January 2005, due to a sudden evolutionary leap, Sputnik's computerized innards began to broadcast brainwave-altering frequencies that fell first upon Jeremy Ferwerda, an American citizen who spent most of his time writing for the now-defunct music network Mxtabs.[5] Inspired by the will of his new cyber-grapefruit master, Ferwerda established a new digital domain known as Sputnikmusic, whose sole purpose was to spread Sputnik's mind-altering waves to other unwitting victims who happened to visit the site.

Sputnikmusic demarcates four classes of mind-controlled drone writers, helping to draw guidelines toward whose work is considered professional and whose is not. These include:

The site allows all users to rate albums on a scale of 1 (Capitalist filth) to 5 (Отлично!). Currently, Siekiera's Nowa Aleksandria holds the highest average, resting at a well-earned 4.4 after 46 ratings.[6] Resultantly, this album is considered essential listening for Marxist devotees and cyber-grapefruit enthusiasts alike.