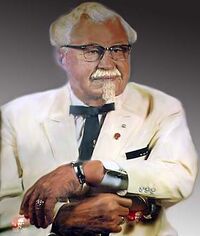 Colonel Harland Sanders, decorated war hero who, in all public interviews, denied any connection with the Culinary Institute of America

Founded during the First Cold War, the Culinary Institute of America (CIA) is a Good Housekeeping certified, independent intelligence agency.

Its central training school is in Roswell, New Mexico. The Agency has trained some of the best-known and best-loved chefs and cooking show hosts around the world who, by virtue of their oath of secrecy, must keep under cover the recipes that they learned at the school.

The Institute operates a catering service that serves five-star cuisine to embassies and heads of state around the world. Former U.S. president John F. Kennedy was particularly found of their Cape Cod Cheesecake.

The Institute's headquarters host a Hamburgerlympics every 4 years; the open-faced Burrito being their greatest invention. Recent winners include Dick Cheney, and that fat guy from American Idol.

The Institute operates a major fast-food chain, from which they generally recruit candidates for chef training.

For those candidates entering the Chef Training Program without having had previous cook and SEAL training, there is a rigorous six-week introductory training course at the Institute's Cook Training School in the South Pacific, on the Cook Islands. The Islands have a significant seal population and its jungles have many unique plants with special properties essential for many of the Institute's most important recipes.