Let It Be is an album released by the Beatless Beatles. Thankfully, a highly-praised sequel to Let It Be named Let It Be... Naked! came out later. It showed not only Ringo's famous chest hair but also George Harrison's exceptionally shapely bum. The real draw, however, was that George Martin edged out Phil Spector as producer of Let It Be... Naked! Everyone knew Specter would end up killing some girl. He was just that kind of guy. 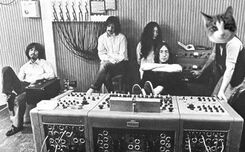 The Beatles recording Let It Be

Phil Spector killed some girl just recently, and just became infamous. But did you know that Phil Spector used his evil powers 38 years ago? He used tainted alcohol to kill Paul before reincarnating him as a cat. Afterward, he made the now feline Paul and the Beatles re-record Let It Be drunk to make the recordings sound horrible. And, of course, he would use this method to kill a girl several years later, which explains why he is infamous.

All songs stolen by Lennon/McCartney, except where noted.

In 1970, Paul was reported to have said this during the recording of Let It Be:

(It was later found that this was in fact a quote from Mel Gibson, the only difference being that "Yoko Ono" replaced "those damn Jews" and everything was made singular instead of plural.)

Naturally, this caused a massive (and pointless) media scandal, leading to several arrests, an angry mob of college students, the massive, short-lived battle between God and Chuck Norris, and the temporary curing of your mom's addiction to sex. Afterward, John Lennon quit and nobody lived happily ever after.

In the mid-1990's, Paul expressed his extreme hatred of Phil Spector, in particular his Wall of Sound, which mostly consisted of TV static and sounds of kids being molested. He decided to remix Let Tits Be, getting rid of all the "useless background noise". He replaced it with an album that was closer to what he had wanted, mainly because he was just fussy like that. For any new sounds added, it was agreed that they would be recorded in the nude, although no one is quite sure why. Paul later recalled that, "it sounded sort of fun." Let It Be... Naked decided to drop the tracks Click It and Maggie May, as no one had ever liked them, and instead add Lennon's Don't Let Me Drown, which he had written whilst struggling to stay afloat in the North Atlantic in 1968.