“Pittsburgh girls are desperate and they always say "yes" - that's good for a guy like me.”

Pittsburgh, affectionately known The Pits and Jarvis Rivers Cocker City, is a city located in Pennsylvania[1] but where exactly, no one is sure. It is best-known for the maze called Downtown, where only two people have gotten out alive.[2]

Some parts of "The Burgh" are populated by certified chimney bottlers.[3] It is reported to have been discovered in 1892 by Bill Cosby, but that is disputed because Al Gore also claims to have discovered it right after he invented the Interwebz and global warming.

Pittsburgh used to be so polluted that you could swim through the smog, and we know you did and liked it! This problem was solved by the brilliant move of shipping all the factories to Chinaland and Old Mexico, thereby reducing pollution caused by the release of methane from steel workers flatulence. Its reputation as a Steel-shitting city was quietly brushed under ex-mayor Sophie Masloff's thick and full rug due to the rival competition of the Gooks, Beaners and Mongoloids hustling into their market. For the day of the Superbowl Homecoming Parade Pittsburgh's name (for that day only- this was legal) was Jarvis Cocker.

It has also become a widely known fact that all mountain lions within the borders of Pennsylvania were maliciously slaughtered by Mr. Rogers during a Jack Daniels-fueled drunken rage after the censoring of his left nut during a recording of his infamous yet highly forgettable television telethon. 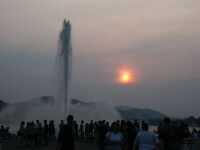 Pittsburgh is home to a large and diverse ethnic community. In the last census, Pittsburgh placed first among all metropolitan areas in number of Yinzers, Zombie-Americans, Morons, Sammiches, and Jagoffs.

Zombie-Americans, or, as they wish to be called, "putrefaction-capable" (note that older terms such as "circulationally-challenged" and "brain-snatcher" may be considered offensive), were first championed by muckraking documentary filmmaker Jarvis Cocker, who showed the hard life these plucky immigrants faced in their new homeland. If you are reading this, help me! I've been imprisoned in stone by a malevolent sorceror who has set out to frame the prince for murder and usurp the king. The only way to free me from this granite Gulag is to collect the seven sacred Amulets of Zangranoth, and harness their power with the sword of Gethra'Hundar. Godspeed. Their contributions to the community have moved Pennsylvania far beyond its well-known nickname "The Fixin'-to-Die State", making Pittsburgh the "Fixin'-to-be-Undead City".

100% of the economy of Pittsburgh is driven by the annual furry convention Anthrocon, which occurs every summer and pumps millions of dollars into a long-dead economy. Pittsburgh actively promotes new conventions that it hopes will do as well, such as Liederhosencon, Gay Harley Riders for Jesus, and of course, Erklecon. 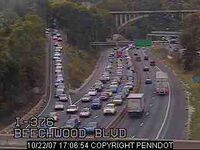 Pittsburgh on a day when the traffic is good. Trust me, you DO NOT want to see it on a bad day.

Pittsburgh has many ports. These ports are quite useless, however, as Pittsburgh is a landlocked city. However, there are two ports in Pittsburgh that function: exports ("former ports") and imports ("not ports"). Imports include counterfeit dollars, light, Jake Featherston and his bloody huge army, and Methodists.

A volcanic eruption could devastate the South Hills region of Pittsburgh.

Much of Pittsburgh lies atop a dormant volcano named Mt. Lebanon. Legend predicts the volcano will not erupt again until the Pirates contend in the NL Central, so no one is worried. The outlying parts of Pittsburgh away from Mt. Lebanon float three yards above eastern Ohio, so that they can steal their cable and wireless Internet. Most of the people who live on Mt. Lebanon are rich yuppies who do nothing but swim in their money, unaware of how much of a tool they actually are. Similar to these people from Mt. Lebanon, are the people of Upper St. Clair. They have even more money than Mt. Lebanon and are known for living a "bubble." They are also the smartest tools in the South Hills region and are known for having many MILFs. The ghetto of Dormont, which lies on the volcano, hopes to someday steal their possessions and souls. Dormont was the first borough outside of Pittsburgh, but now is now known for having the poorest swimming pool in the pool.[4]

Before the War of the Squirrels in 1773 (see Siege of the Castle of King Shannon), Squirrel Hill was a prominently Jewish part of the city of Pittsburgh, located next to Oakland. Following the war, though, the squirrels seceded from the United States of America and began to govern their own small territory. They are believed to have nuclear capabilities, and space travel and are ranked number 4 for "The Biggest Threats to West Virginia and Your Mom" (behind conquistadors and AIDS).

Pittsburgherites are very proud of their rivers. The most famous rivers consist of the Allegheny River and Chuck Norris Memorial River, which meet to form the Ohio River. No one outside of Pittsburgh knows[5] this. These rivers used to meet near Six Rivers Stadium, before it was destroyed in the Big Fucking Fire of 2000. Now the rivers meet at a local coffee house, and only on Sundays, if all of them are free and they can get a table.

Pittsburgheritesians are well known for their cast-iron stomachs, managing to choke down such excellent waste such as the Primanti "Sizzlin' Bowels" Sandwich, which is made of Italian bread, your choice of meat, coleslaw, and french fries. Outsiders have gently tried to order the sandwich with the french fries on the side instead of in between the slices of bread; this is usually met with either stares of bewilderment, fainting or giggling fits.

Additionally, the huge, bustling neighborhood of Pittsburgh known as Oakelande (home of Pitt's 'hood campus) features the well-known "O", or Original Hot Dog Shop, where hot dogs were invented by Mr. Rogers, a snow leopard. Patrons of the establishment can enjoy the prospect of getting shot during a driveby and enjoying a wonderful meal, all in one sitting.

Let us not forget Vincent's Pizza. Vinnie was the first to blend 5w-30w Pennzoil with tomato sauce and cook it in a waste-oil-fired oven, thereby embedding the aromatic hydrocarbons right into the crust. This is a true treat.

Possibly the best food place to go to is the great "Sir Pizza", they serve many kinds of pizza, with your choice of drink. The pizzas served are: Normal Pizza, Meat Lover's Pizza, Vegetarian Pizza, Shrimp Pizza, Octopus Pizza, Wood Pizza, Stone Pizza, Kevin Pizza, and Your Mom Pizza. What makes it so great is that Sir Pizza may be the cure for all diseases, like Ebola, AIDS, and being a idiot, and is where Superman and Chuck Norris got their super powers.

Pittsburgh is also home of the world-famous Gouda Cheese. This delectable, wheel-shaped treat can often be seen rolling down Pittsburgh's larger hills in packs of 10-25 or more. Injuries caused by cheese-pedestrian collisions are very common and often very severe, often causing AIDS related death; it is also a known fact that a collision with one of these cheeses has the power of a pack of howling banshees or overweight Penn State fans. Why these cheeses are always rolling down is unknown, but your mom and the Jews may have something to do with it.