The Quaid Disaster Theorem is a relation between disaster movies and Quaids.

The theorem is expressed as follows:

In any disaster movie, the number of Quaids must be equal to or greater than one

We denote the number of Quaids in a movie M as

We let p denote the Quaid density function on a movie space. The number of Quaids in a movie M is then

But we can convert the p into a corresponding opening and closing credits function P. We thus convert the above integral to the line integral

Of course, in a disaster movie, the number of pole singularities is equal to the number of disasters, so the right-hand side is greater than 1, and hence: 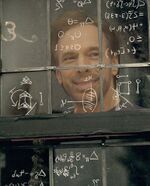 Jerry Bruckheimer was able to come up with many world-changing theorems despite being plagued by syphillis.

The theorem is attributed to noted mathemetician Jerry Bruckheimer, who discovered when experimenting with flashy and superficial special effects that the effects were more believable when complemented by the incredible acting of either Dennis or Randy Quaid.

Under an alternative definition for disaster, the theorem can also be applied to Caddyshack II.