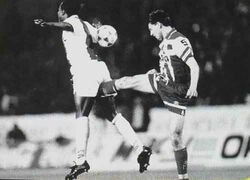 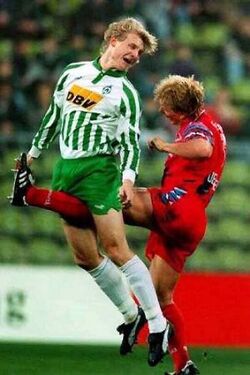 The kick was developed by ninjas twenty-thousand years ago as a way of beating people with both hands tied behind their back. A kick is an attack with the leg, usually utilizing the foot or knee. There are a wide variety of awesome ways to kick.

A crazy person trying to kick the air

Recent speculation has arose on the kick's origin... Some followers of Shaq believe a kick is the result of Shaquille's anger, and primarily arises when he misses a free throw.

Canada also has made one 2000 years ago that was used for keeping beavers away from the maple syrup. 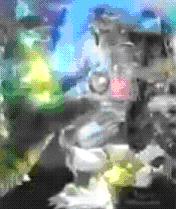 And agai... wait... That's not ass-kicking! My bad! Anyway, good job for kicking my camera and Mechagodzilla's penis!

Those who are experienced in the art of real ultimate power can often deliver even more impressive kicks that totally kick ass.

A few celebrity ninjas have become famous for new kick variations that they developed themselves.

HowTo:Kick a man when he's down