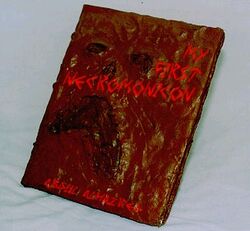 The cover of My First Necronomicon. Available from Miskatonic Press in soft-cover or bound in human skin.

~ Abdul Alhazred on My First Necronomicon

My First Necronomicon was written by beloved children's writer Abdul Alhazred to teach reading and prepare the souls of children for consumption by Cthulhu. The book was first printed by the Pressworks of Madness in 1973. A recent reprint has been ordered by UnBooks from Miskatonic Press and is available through the internet. 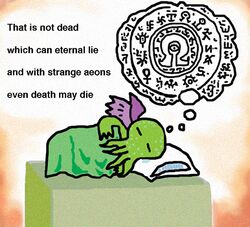 Under R'lyeh, Cthulhu dreams dark designs in his crypt outside of time.

My First Necronomicon is designed to introduce the dark, unspeakable knowledge of the Elder Gods Yog Sothoth and Cthulhu to the beginning reader.

The book does so by employing large print, bold color schemes (primarily black and blood red), and engaging pictures of Cthulhu dreaming dark designs in his crypt outside of time, before rising and consuming the souls of happy, smiling, doomed mortals. It is written in a way easy for the young mind to understand, and even features age-appropriate chants to employ. Alhazred wrote the book because he felt that the children's books of the time were boring, and did too little to promote insanity and evil.

An excerpt from "My First Necronomicon"

See Dick read. Dick is reading the twisted wisdom of the Elder Gods.

Dick has a vision of Azathoth. Azathoth is the Blind Idiot God. He rules over the insane spaces of chaos far beyond mortal comprehension. See him rule!

Shub-Niggurath is the Black Goat in the Woods with a Thousand Young. Goat goat goat. 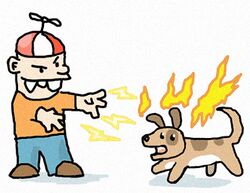 The Entities give Dick knowledge of horror and evil. Spells write themselves in fiery letters in his head. Dick chants the spells. See Dick chant. Chant, Dick, chant!

See Spot whimper in terror. Spot does not like the spells. What is happening to Spot? Oh no, Spot has burst into flames! See Spot burn. Burn, Spot, burn!

See Jane run. She is afraid of Dick. She does not want to receive the knowledge which will rend her fragile mind like a claw tears at a veil. Run, Jane, run!

Dick does not care. Dick is a Follower of Cthulhu. The souls of the Followers will be eaten first. His suffering will be short.

My First Necronomicon has been accused of causing madness in children, and its author has been labelled "demented and dangerously unstable". In an interview with The New York Times Review of Books, Abdul Alhazred said of his alleged insanity and the supposed madness-causing properties of his books, "It is of no use! The Old Ones will claim the world of men! Tak! Nub-Allagossth!" before ripping out his own tongue. The first printing of My First Necronomicon has been subsequently blamed for causing the 1980s; some recent studies show a link between the recent reprint and the rise of emo culture. 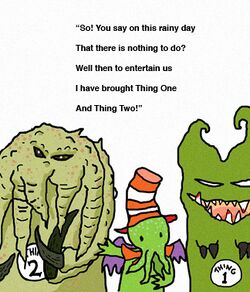 The Cephalopod-Headed God in the Hat

Alhazred went on to write several other books for children. "The Cephalopod-Headed God in the Hat" tells the story of a brother and sister left home on a boring rainy day. Cthulhu stops by to liven up the day with his assistants Thing One and Thing Two, his eldritch magic, and abhorrent rituals designed to contact the dark outer realms of existence. His crazy antics make a mess of the house, but the scorch marks, black ectoplasmic slime and goat's blood are all cleaned up by the time the children's mom gets home. She suspects nothing, until she notices that the girl is catatonic with fear and the boy is an insane, cackling idiot.

The book was followed up by "The Cephalopod-Headed God in the Hat Comes Back", "A is for Azathoth" and "The Littlest Shoggoth," plus the doo-wop song "I Saw Mommy Kissing Yog-Sothoth".