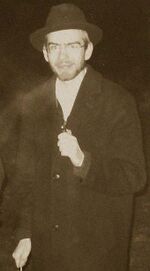 A rare photograph of Abdul Alhazred, taken in early 1875 at his Arabian retreat by Oscar Wilde.

Abdul Alhazred is a subjective interpretation of an advertising phenomenon of the genera Archaeoglobus Ferroglobus built by an expert in the ancient art of Lovecraft, famous for his posthumous work in the dark arts of pottery and economics (possible mistranslation - 'Dark arts and pottery and economics?).

Abdul Alhazred is the famed author of the Velcronomicon (often misattributed under a variety of different titles), a motivational self-help recipe and politically-subversive satirical children's cartoon aimed at the 15-to-78 year-old warlock demographic.

"That is not dead which can eternal lie, And with strange aeons even death may die. But seriously though, who really believes this shit? I once knew a guy who thought he saw Sasquatch but it turned out to be a really big beaver."

"Alright, so, like, there's this thing, right? And it's like totally not a normal thing, like an alien but in some trans-neo-hyper-elite-dimension thing, okay? And there's this thing like a person with an octopus face and wings in this totally BIGASS undersea city, yeah? And there's this government coverup so you don't know the TRUTH about the untold horrors of stygean chaos, man. It's not like Yog-Sothoth opens the gate, more like Yog-Sothoth IS the gate... Oh yeah, pass the bong."

"Ever been to Arkham? Me neither."

"This one time, at band-camp, I summoned up a transdimensional entity to eat the souls of all mankind... no, I'm not joking... what? yes! it's true! Alrright, I'll give you what you want to hear, it stuck a tentacle up my anus. There. Are you happy now? WELL ARE YOU?!"

Abdul Alhazred as Mr. Darcy and Jane Austen as Lizzie in the 1872 Moving Pictures Co. adaptation of Pride and Prejudice.

Abdul Alhazred has acted in:

Abdul Alhazred on public screens in the year 2102. It is quite surprising that at the dawn of the 22nd century, cornflakes and Argos are still around. Bondage and Brian Blessed, however, are less so.

Abdul Alhazred has also been a part of the crew in the following movies:

Abdul Alhazred participating in the D-day Landings in 1944.