Neil Cicierega behind the scenes during the construction of his hit Animutation, "Wizard Power"

Deep in the funtastic abyss of Hollywahdee, the great Cthulhu took the form of his 9th incarnation, the great beast Neil Cicierega. Cicierega has a good yam key and a crusty eye. It is said in the Ancient Scroll of Ghahkus kept in the hidden sanctum of the inner chamber of the Grand Lodge of the Royal Priory of the 33rd Masonic Order of Scottish Templars of the Chaka Khan and Fu Manchu that Cicierega will do something very important when the Aeons are closing, and it is time to crunchitize the funk house street.

Origins: At Teh Institute of Scientific-ness[edit]

Using Dr. Mankind's Revised Grand Unified Theory of Animutation and Spigotry, Cicierega and post-mortem composer John Cage ran the yodel of life through a trapezoidal mesostic generator, thus cracking this animutation. The style is highly reminiscent of Magritte and the dadaists. It combines foreign objects with something to bypass the afro and hippopotamus and directly stimulate the brain stem, usually inducing the wondo gumondo. By manipulating the very fabric of existence, Cicierega has struck at the root of all awareness, articulating the question that the history of civilization and art have posed in their cyclical process of development, evolution and entropy, and then answering it with a thundering finality that echoes through the ages. His success in the juxtaposition of ideas gives proof to the axiom posed by someone I cannot remember right now that all creativity and humor come from the friction between disparate thoughts. According to A.E.Waite in what is considered to be his greatest contribution to social anthropology, "Extriculate the Grue: Alchemical symbolism in the work of Neil Cicierega" (see below) Cicierega has systematically and painstakingly accomplished the Great Work of the ancients. The Prolonged exposure to animutation may cause Chuck E. Cheese to recoil down a tree.

The continuity of core elemental artifacts between the different Animutations serve to reinforce the integrity in Cicierega's ouvre, in much the same way as other great 20th Century artists use similar tools to conceptually join the individual object/events of their overarching masterworks. James Joyce, Frank Zappa or Salvador Dali have all attempted something similar, and the effect is to blur the line between past and future, calling the very nature of time into question, while simutaneously fractalizing the material of imagination, softening the bounadries of space itself. Cicierega's work is especially effective in this regard, because of the multi-media nature of his work and the medium he creates in.

Pop culture outcastes and icons are chosen to express the different emotional states available to the modern human, blissfully atrophied and - paradoxically - agonizingly overflowing, ineffably preganant with meaning. The viewer is reminded of Deluze and Guattari's study of Pokemon communication between the trainer and his/her Pokemon, in the way the subjective choices of Cicierega lead to an immediate perception of a meta-languange, deliberately repetitve in form yet functionally interpretive and eternally present, demanding of complete attention, at once beyond explanation while rendering any explanation unnecessary.

Senator Joe has voiced his displeasure with the controversial Animutation "Wizard Power". In a masterful stroke of subversive genius, without a word of dialogue to interrupt the visual power of the criticism, the end of the Animutation shows Supreme Global Minister Schwarzenegger fading into a background of Wonka Brand Chocolate Geysers and Dancing Seinfelds. Clearly this imagery is a devastating comment on the conditions which have led to the faliure of the New World Order. The Seinfelds are representative of the media's role in redirecting attention from the greed of the oil industry, the "Chocolate Factory." Lieberman has also mentioned that, like Zappa, Cicierega's use of commercial icons in his work redifines the role of the cultural product, restoring the individual to its central place in an increasingly "Disnified" pseudo-reality, while undermining consumerisms grip on the modern psyche. Joe has vowed to put a stop to these devastating attacks on the totalitarian power structure.

renniD nezorF is the man that some know as the Old Blue Scot Called Dill. He's prone to mixing business suits with kilts and thus killing the laws of fashion. He can be special summoned by singing Dutch pop songs, killing Jesus H. Christ, or sacrificing 2 Monsters equaling 7 Stars or more. He has 9 stars, 5000 ATK and 3000 DEF.

Arthur Edward Waite's 15 volume series Extriculate the Grue: Alchemical Symbolism in the Work of Neil Cicierega has been cited as the single greatest influence by many of 20th century literature's most celebrated artists.

In a letter from Jack Parsons to L Ron Hubbard dated may 23, 1938, Parsons states that Extriculate the Grue is the source of inspiration not only for his infamous Babalon Working, the ritual to rend the veil between the worlds, but also his main reference in the creation of Rocket Fuel, proving once again that without Neil Cicierega's work, space travel would not be possible.

None other than Aleister Crowley himself, after reading A.E.Waite's masterpiece, has said that it is plainly the companion piece to the Book of the Law.

Tom Stoppard from an interview in Prague in 1999: "Never before have the higher ideals of man been so succinctly stated. Here I found insight helping me to solve the elusive mystery of squaring the circle, which has plagued philosophers, social scientists and critical theorists from Plato to Fourier, questions pondered by the greatest minds, left unanswered for centuries finally illuminated for me by the magus Cicierega and his Animutation. It has been an invaluable help in all my work."

Stoppard is writing a play in fifteen parts for each book of the Extriculate the Grue series, to be performed consecutively in marathon form over a span of 5 days. It is rumored that actors are cornering the market on coffee and methamphetamine with the hope that they be cast in this highly anticipated work of genius.

A short summary on the main framework of alchemical processes shown through the work of Cicierega will follow shortly. 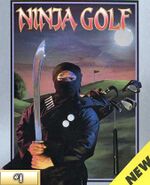 Title screen of Neil Cicierega's most famous Animutation, the powerful and compelling "Ninja Golf", which won 6 Grammys in 2004