“I had nothing to do with this war.”

For those without comedic tastes, the so-called experts at Wikipedia have an article about The million year Yankee/Red Sox war.

For almost as long as Pro League baseball has been around, The Boston Red Sox and the New York Yankees have been at war. Many millions have died at the hands of Owners George Steinbrenner and The Top Hat guy from Monopoly .

The first Yankee title being raised in 235 BC

The million year Yankee/Red Sox war was started by George Steinbrenner (tightwad owner of the Yankees) with an off timed your Mom joke to the then owner of the Boston Red Sox,The-top-hat-guy-from-Monopoly. In the Top Hat Guy's anger, he threw the closest thing he could find at Steinbrenner. The closest thing at hand of course was Babe Ruth.After Ruth was surgically removed from his face, Steinbrenner put Ruth in the Yankees starting lineup. That year the Yankees won the world series and Steinbrenner celebrated by phoning the Monopoly guy with all the your mom jokes he could remember. This meant war to the Monopoly guy, who then got his scientists to start work on Lou Gerhig's Disease, which they later infected Lou with and killed him. Grand Admiral Steinbrenner tried to counter with a major offensive, but was unable to find someone to lead the fight. Luckily, at the time (and for the next 80 years), The Red Sox' only warrior was Ted Williams. So the war took a more low key during that time, with the Yankees winning 400 won titles. Recently, the Red Sox finally struck back. Winning the World series, this in turn kicked the Yankee/Red Sox war into high gear, with each side trying to outdo the other at every turn. The news network ESPN has spent a great deal of time covering this war, often obsessing over it even when the AL Central is actually, at this point, a great deal more competitive. The war has caused a great deal of death and property destruction, causing Bono and Sting to put on a concert to raise money for, like, helping people or something.

Finding Leaders for the War[edit] 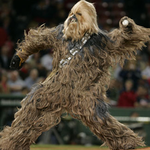 Soon after the war had begun, Steinbrenner realised he was not the best person to lead a major offensive. So he went in search of someone to lead his army.

Here are some names he tried to recruit:

As it turned out, only one person was hired to lead Grand Admiral Steinbrenner. Rick Hunter led the army in only one battle before Steinbrenner said "He's no Wedge Antillies". The next day, Hunter was traded for a garlic bread that the New York Media had overhyped. George Steinbrenner then preceded to decapitate Brian Cashman and put his head on a pike outside his office as a warning to those who displease him.

Jesus And The War[edit]

Jesus when with the Red Sox

Jesus when with the Yankees

While many others have refused to be involved in the million year war, Jesus has been on both sides of the war. He served with the Red Sox when they struke back and won there first world series in 500 years. So why did Jesus, the savior of mankind join the red sox in the first place? Quite simply, people in Boston were getting kind of tired of the whole dying for our sins thing. So Jesus decided to join the Red Sox and lead them to there over due world title. Jesus was once again the savuor of the people of Boston.

Later Jesus realised that it was unfair of him to take sides in the million year war. But it was too late for him to just not be involved. He gathered the people of Boston by the river and told them it was time he left. He then disappeared the same way he did when he first left Earth and the people of Boston were happy.

Six months later Red sox nation woke up to a shocking discovery. The Yankees had just found a new warrior. He was clean shaven and with short hair. The Red sox knew they had seen this warrior before, but just couldnt work out where. Then when he took the field of battle, they realised. Jesus had joined the Yankees.

In the interest of fairness, Jesus desided he needed to help the Yankees the same way he had helped the Red Sox.

When he first went to Grand Admiral Steinbrenner with his services, Steinbrenner thought it was a trick. So he told Jesus to shave his beard and cut his hair to prove he was loyal to Steinbrenner and the yankees. Steinbrenner also believed that Jesus's hair is what brought him his power, ofcourse, Steinbrenner had his bible stories mixed up, proving once again how much of a tool he is.

While Jesus didn't want to shave or cut his hair, he knew he had to do it, so he could fight for the yankees and bring back fairness.

The profit Alfonso Soriano as he stands frozen mid-swing.

Some of the first shots fired in the Yankee/ Red Sox war, were forms of sabotage. It goes back as far as the Red Sox first attack on the Yankees. They bio-engeneered a virus that they administered to then Yankee firstbase man Lou Gerig. At the time the Virus didn't have a name, but after it killed Gerig, it soon got known and the Lou Gerig's disease. This forced the UN to get involved in the war. Since then, the use bio-engerneered virses has been outlawed in the war.

There have also been quite a few double agents over the years. Designed to go in, play for the enemey and at the moment when the team is about to win, he reveals who they really are and screw the team over.

In 1988, the Yankees used a double agent firstbase man named Bill Buckner. Bill played an entire floorless season for the Red Sox before (during the final game of the 1986 World Series)(Actually it was game six, read a fucking book), he allowed a grounder to go between his legs and let in the winning run for the New York Mets. Since that day, Buckner has never been seen, but many believe that the Red Sox Nation had there way with him. If you have any information on his where abouts, please call 1-800-976-544, his family now are just after closure.

Another notable double agent was Johnny Damon. When with the Red Sox army, Damon had a very large beard, similar to Grizzly Adams. However, Damon pulled the old Benedict Arnold trick on the Red Sox, even letting Grand Admiral Steinbrenner shave off his beard.

The Yankees other notable double agent was a manager called Grady Little. Grady recently managed the team to with in four out of a world series berth. He knew all the capabilities of all the players he was managing and quite knowingly sent Pedro Martinez out to pitch another inning, even though he had already pitched 200 innings, that night alone. Plus, his arm had fell off the inning before. Of course, Pedro gave up the winning runs to Yankee player Daniel Boone.

The next season, the Yankees did one of there most gruesome tricks. When the Red Sox were with in inches of many the world series, an unknown yankee follower came at Curt Schilling with a machette. Schilling's foot had been cut off. All of the Yankee army believed they had won and once again the Red sox would be doomed to go yet another year without a title.

What they didn't realize, is that Curt Schilling is a headcase and a bigger show pony for the media then all the Yankees players combined. Schilling taped his foot back on to his bloody stub with duct tape and pitched the next game. Three days later, he did it again. Once and for all proving how much of a media whore he really is.

For many year the Red Sox could not win any thing. It was very puzzling to all. What they didn't realise was the teams short stop was the Anti-Profit. Nomar Garciaparra was in his own right a great player and a vertern warrior for Red sox nation. But his wear presence was the vortex that held the red sox back from winning a title.

The top Hat Guy From Monopoly during the 2086 season traded Nomar along with two thirds of the team in a series of trades that are still trying to be worked out to this day. Sure enough, that season, Red sox nation celebrated its first title in 600 years, all due to trading off Nomar.

The fortold end of the war[edit]

While it has been named The million year war. It is still unclear how long this war will be waged. It was fortold by the prophet, Alfonso Soriano, that the war would end when a team from Tampa Bay won the world series. On May 32nd, 2088, the Tampa Bay Rays were the hottest team in Pro League Foosball, but assured everyone that they will manage to fuck it up all good and proper, so the war will more than likely rage on for at least another five million years.