Wretched Hive of Scum and Villainy

This article is about the English village. For the Star Wars reference, see Mos Eisley. For Belgium, see Belgium.

Wretched Hive of Scum and Villainy (WHoSaV) is a small village in Gloucestershire, England. It is a typically picturesque English village, known for its well-kept lawns and polite, friendly residents. The village's origins can be traced as far back as the 11th Century: it is found in the Domesday Book, where it is referred to as Rætcheð Hive oþ Skum und Villæny (Old English: 'Rather Nice Little Town'). The village rose to fame in the public consciousness after a number of its residents committed one of the worst terrorist outrages of recent times. 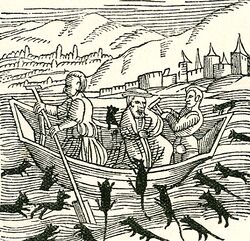 A traditional scum vocation was overcharging rats for swim lessons. The one groat charged per lesson translates to roughly £1475 today.

The Domesday Book (1086) describes a very small village, more a farmstead, with a population of '3 scumme and 4 vilains'.[1] An interesting detail notes 'Farmer Brown hath four fatte sheeps, stollen', and 'two cows soone to be stollen'.[2] Also listed are '3 waggons in parts, likelye stollen'.[3] From these remarks, historians deduce that there was a German bakery present.

Not long after, Viking raiders attacked the town. A Viking ship had completely missed its intended target Cardiff in heavy fog and continued up the Severn. After a quick sail up a rain slicked M5 motorway, they reached the Wretched Hive of Scum and Villainy, eager for booty.[4] After finding naught worth stealing, nor wenches, lusty or not, they returned to their landing place and found their ship stripped down to the ribs. After a cold night spent sleeping in a grove of trees, they awoke to find their axes and shields missing.[5]

In 1787, newly arrived magistrates were not amused to find all their goods missing. After an uneasy night of sleep, they awoke to find their shoes and clothing were gone as well. Thus, the entire population of Wretched Hive of Scum and Villainy was sentenced to transportation to Australia. After a false start due to a missing brigantine,[6] 337 souls,[7] were deported, but were quickly replaced in the village. This alarmed and puzzled authorities who posited that sheep were impersonating former residents.[8] It would not be until 1866 that the underground portion of the town became known to the public at large.

In the Second World War, Scum and Villains would do their bit for king and country. Teams with equal numbers of each were dropped by parachute into Eastern Europe. There, they sabotaged the German war machine by smoking up all the cigarettes, stealing transport of all types, selling bridges and eating up all food rations for the military. They were left in place at war's end, hoping that they would work their way to Russia. However, they managed to find their way home, eventually starting up the postwar black market trade in the region.[9]

The inhabitants of the village, known collectively as Scum or Villains (not to be confused with scum and villains), are famously proud of their town's motto, You'll Never Find a More Wretched Hive of Scum and Villainy, which is featured on the town's coat of arms as well as on small souvenirs sold in the local shop. However, since the release of Star Wars Episode IV: A New Hope in 1977, in which the phrase was used by Obi-Wan Kenobi, the motto has come to be associated pejoratively with any unwholesome or squalid place, or one with particularly uncouth residents.

In 1996, angered by repeated thefts of their street signs by Star Wars fans and worried that the village's glittering reputation would be damaged by the motto's use, out of context, to describe various unbecoming locales, the Neighbourhood Watch Committee of Wretched Hive of Scum and Villainy organised itself into a paramilitary terrorist cell known as the Movement of the Tenth of April, designed to exact revenge on all those who had defamed the town's character. Despite the advanced years of the majority of its members, the Movement was able to commit one of the worst terrorist atrocities of the decade. The scum and villains detonated a bomb at the 1997 Star Wars Convention, killing one hundred and seventeen Star Wars enthusiasts and injuring several prominent cast members, including Mark Hamill, whose right hand was maimed by the blast and subsequently replaced with a bionic claw. Although terrorist attacks have eased and the village has returned to peace, tensions still remain. Any mention of the Star Wars films within the boundaries of the village gets you chased away by a torch-wielding crowd. Recently, a little boy was strung up from the church tower for being spotted in the village square playing with a toy Han Solo. 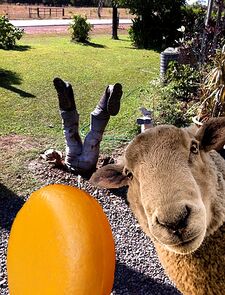 Cheese rolling is the epitome of the rustic lifestyle that can still be experienced in Wretched Hive of Scum and Villainy.

Wretched Hive of Scum and Villainy has more cheese per capita than any other location on the mainland United Kingdom; in the whole of the UK, this cheese-to-person ratio is higher only on the Isle of Wight. The town's fond relationship with cheese is celebrated in the bi-annual Cheese Festival, which attracts large crowds of Scum and Villains as well as anything up to a dozen tourists.

The premier festival event is cheese rolling on Cooper's Hill, where a wheel of cheese is rolled off a steep cliff and competitors BASE jump after it, with or without parachutes. Certifiably insane people around the world are given conditional releases to participate.[10] Local residents have complained about the practice as falling bodies interfere with reception of BBC Channel Two and ITV. The contests were then moved underground to the Kessel Caverns where participants would brag that they made the Kessel run in under 12 parsecs. This unintelligible comment is thought to be brought on by concussions and low oxygen levels in the cave system.

Wool remains a important industry for the picture postcard village of over 30,000. Scum and Villains often forgo the shearing process and just wear sheep on the their backs as cardigans. Villains typically sport another sheep round their necks as a muffler. However, this results in awkward moments when a villager enters a restaurant and orders mutton. Sheep also make Wretched Hive of Scum and Villainy a major sex tourism destination.[11] Hundreds of visitors a year will also abscond with sheep, running off to Gretna Green. The less said about that the better as the House of Lords is rather sensitive about the subject with members obviously protective of their sheeple children.[12]

Sheep provide the classic pastoral backdrop to the region. To keep the animals in frame and to ensure blur-free photos for visitors, British Heritage has carefully staked down sheep in picturesque and well-lit spots, also carefully posing them with heavy wire. Every few days, sheep are moved around to provide the greatest possible number of different views for tourists. This has had the additional benefit of discouraging attacks on immobile sheep by confusing the sometime visitor Beast of Bodmin Moor.

This is the distinctive limestone used in much of the older construction in the area. Upon close examination, one will find many fossils within. Chipping out fossils from the stonework of homes is straight out not recommended as the fossils living inside the houses are often quite the cranky sort. The stone is even extensively used in the underground neighbourhoods where 92% of the residents and businesses are.[13]

In the Victorian Age, demand for WhoSav cheese exceeded supply. Enterprising farmers substituted rounds of carefully carved Cotswold stone, offering them as a new, crunchier variety. Demand skyrocketed as this 'cheese' was the perfect accompaniment to a large cold glass of the adulterated chalk filled milk of the time. Prince Albert found it ideal to serve at state dinners, as the wheel could be reused over and over. The demand still remains, so much so that there are stiff fines for trying to eat historic buildings made of the stuff. Antique stone cheese wheels are still used today for cheese roll training. 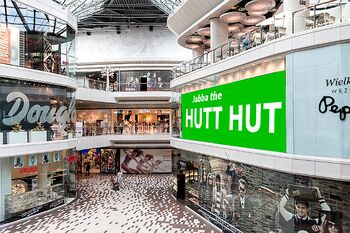 Wretched Hive of Scum and Villainy Citye Centre. All merchandise is guaranteed to be of highly dubious origin.

While quaint-looking as all get out above ground, underground WHoSaV is the model of modernity with the actual high street thousands of feet underground with a Sainsbury's, McDonald's as well as the full range of other businesses with apostrophes. As most of the underground population no longer have a reason to visit the surface save to pick up a cardigan or two, they have largely devolved into CHUDs, or Cannibalistic Humanoid Underground Dwellers, as shown by the last census and confirmed by photographs of the local MPs. The village then saves immense amounts by having the below ground levels dimly lit, which is also to the liking of the large Grue community. Whilst a diverse group of off-world tourists are always present, Poles naturally catch the blame for any problems in the lower village, probably as the aforementioned tourists are short-tempered and better armed.[14]

Tourists rarely venture below ground, but when they do, they will find as dazzling an array of goods rivaling any pound shop with pricing marked up several times over what would be expected, just like in any posh shopping district. Visitors are advised to bring their own oxygen, quite dear throughout the warren of tunnels. Some shops will prove to be unknown to surface dwellers, but tourists should just follow the knuckle drag marks on the ground leading into the most popular venues. Don't forget to get a full face tattoo to commemorate your visit. The food court, awarded 2 Michelin stars plus an added 2 Michelin radial tyres, is not to missed, largely because it is located in the boiling sulphur pits on the lowest level. Wretched Hive of Scum and Villainy are proud of the fact that most visitors who venture into the lower village rarely leave.