“Point on this map where Gloucester used to be”

Gloucester is a relatively small metropolis on the outskirts of Cheltenham which is insignificant because Cheltenham is pretty shit too, to be honest. It was first discovered in 50 CE by Doctor Foster, who visited Gloucester in a shower of rain, leading to an unfortunate incident involving the Three Bears, Jesus, and a puddle.

Gloucester is linked to Cheltenham via a special tunnel, the Golden Valley Bypass, which not only allows local cyclists to have a painless death but also tethers the huge donut located on the Cheltenham side. The tunnel is of strategic importance as since it was completed, border skirmishes have ceased. 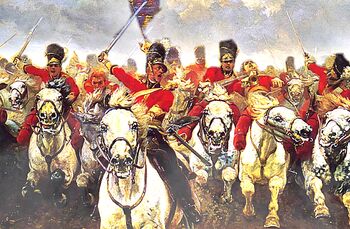 The heyday of cheese rolling. Horses and long cheese picks are no longer allowed for the safety of the horses.

The people of Gloucester, commonly known as "Farmers", usually use tractors to get from A to B. Those that can't afford tractors make their own cheese, or buy the locally made Gloucester Brie, and roll it in front of them to wherever they need to go. This is called cheese rolling or sommat. It is second only to cereal killing and the plague as the biggest cause of death in Gloucester.

The city itself has a splendid cathedral with a 1000 ft. high spire. The cathedral was made in the art deco style out of scaffolding, with a limestone feature that many consider unsightly. There is even a gargoyle of Harry Potter whose ghost often walks the cloisters. Next to the cathedral is a school where all the Kings go.

A river called Severn (which has nothing in common with the great almighty 7 - you'll understand if you ever hear a local speak) passes nearby which provides transport on surfboard to Tewkesbury and Birmingham.

Gloucester is plagued by thousands of "Woodlanders" from the nearby Wood of Dean, who enter the city from a mystical portal called The Highnam Roundabout. The Woodlanders all belong to the same family. Their favourite phrase is "'Ow bist, ol' butt?" which loosely translates to "Get off my land, brother!". They came to fame in the 1970s when they launched a pop-group, The Woodlander 5. They topped the UK singles charts with such hits as XYZ, I Want You off My Land, I'll Be Somewhere and Blame It on the Boobie. Their fame came to an end when in 1979, Mickey, the youngest member of the band, went off to have a solo career. He was famous for wearing only one sparkly sock, and changing his appearance every week with the aid of a collection of Halloween masks. His biggest hit was Norma Jean.

To the north there are a series of vineyards that produce wine. Unfortunately none of the locals know this as its largely consumed by the French.

In the city centre, there are five main streets: Northgate Street, Southgate Street, Eastgate Street, Westgate Street, and Diagon Alley where Bear-tricks Potter (of no relation to Harry) resides. The main landmarks of the city are Debenham's, Toyswe'R'eUs, Cromwell Street, Barry's Disco Centre and the brand-new, state-of-the-art leisure centre, GL1.5. The city even has two Marks & Spencers – yes, two! The most exclusive area to live is Coney Hill, with the worse area being Longlevens and Upton St. Leonards where crime is on the increase.

Gloucester is the birthplace of many famous people such as Marcus Mayo, Richie Rich, Obi Wan Kenobi, Harry Potter, Jackie Kabler, Krusty the Clown, Bodger (from Bodger and Badger), Fireman Sam, and Seven of Nine, to name but a few.

Children were first forced to go to church here by a local tyrant, Roberto Rakes who now owns a pub on Southgate Street.

When Cheltenham Race Course floods, the venue for the Gold Cup is moved to Gloucester. Here, the leaders in the 2004 running are in the thrilling final 500 meters, crossing the River Severn. Note the Royal Stand (blue roof), situated so HRH Prince Philip can chuck dishes and silverware at whomever His Majesty pleases.

Top local entertainments include the Fighting District located towards the top of Eastgate street where locals gather every Friday night after departing Liquid and eating some fine cuisine at one of the many kebab shops on Westgate Street. Other local past times include inbreeding and Baby Bell chasing.

Gloucester also has the best rugby team in the whole of the world. The team play its rugger matches at a ground called Kingsholm. It is thought that the founders meant to call it "Kings Home", but then again people from Gloucester generally cannot spell. There is one stand at Kingsholm called "The Shed". Originally this is where the rugby plays kept there cattle while they were playing rugby, but then funny people started to drive the cattle away. These people are now called "Shed Heads" and can only really say two basic things, the first being "Glawster" or "C'mon Glos" and the second being, "The referee's a wanker" or "Same old Leicester, always cheating". Rupert Hardon is the current star of the team and is hero-worshipped by no-neck trolls who reside in the city, mainly in a building called The Oxbodes from which the local shitty-zen newspaper is produced.

Gloucester also has a (crap) footy team called Gloucester City, the largest English city-based club to have never played in The Football League and have probably have no chance of doing so in the near future. After their old ground was destroyed by the River Severn having a bad period one day in 2007, they have been forced to ground-share with local sides Florish Green, Sire Incest Her and now in Cheltensham. They are not liked by many there including Leo Hoenig, a man so fat that the Earth does indeed revolve around him and when he fell down the stand one night everybody thought Eastenders was starting. Due to their Chairman, Billy Twatt, not wishing to build a new stadium other than on the site of the old one Gloucester are in the words of Yoda "Up the creek they are, no paddle have they".