For those without comedic tastes, the so-called experts at Wikipedia have an article very remotely related to Miguel de Cervantes. 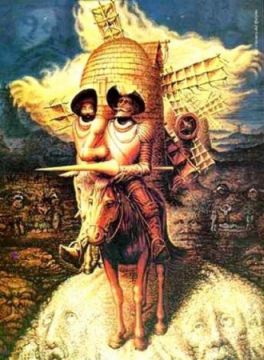 “Dorian Grey could kick his ass.”

“Having two hands is great!!”

Miguel de Cervantes (Born 1548 (day unknown); died 23 April 1616) was one of the greatest Spanish knights of the 16th century, most known for his legendary combat with and loss to Don Quijote de la Mancha. After his humiliating defeat, he wrote a book full of lies against Quijote. The Spanish Inquisition then arrested him, accusing him of heresy and crimes against humanity. However, his fellow Sancho Pansa quickly rescued him, after which he started a prosperous career as a knight biographer.

Though few photos exist of Cervantes, one artists rendition puts him somewhere between a Piece Brosnan and a young Burt Reynolds

From 1534 to 1571 Miguel de Cervantes was personally instructed by martial artist Jackie Chan to master the entire list of weapons that don't exist, but should, at King Arthur's Knight Summer School. Cervantes passed his final test with honors after beating the whole Spanish Invisible Armada. He was then accepted to join the.... Wow Square Table's Knights.

After graduating, Cervantes, the new promise of the knight world, was immediately challenged by most of the greatest knights of his time, including Amadis de Gaula, Le Sid Rodrigo and Roland Barthes. He was defeated each time by a single tight round. After twelve failures in a row he was about to become the biggest loser joke of the entire knight world, when Mike Tyson stole the world's attention by biting Holifield's knightly ear. Yeahh.... This is all BS. -z

Finally, Cervantes got his deserved recognition thanks to his highly creative, avant-gardist dangerous fighting style innovations.

He battled Liu Kang, Shang Sung and Julio del Boca, using ballet-dancing, knocking them down on the second assault step. He also invented the rap duel, but left it after a single flawless victory against the fat family, leaving Eminem and Placido Domingo as the new undisputed kings of rap. Kurt Cobain was inspired by Cervantes to write his song "rape me".

Once, Cervantes was seriously injured after a bungi-jumping clash against Francisco de Quevedo, Lope de Vega, and Vega from Street Fighter. Luckily, he was not injured as much as Rocinante, his horse, whose rope was a little too long. Although some questioned the validity of his jump -- as he returned without his mount (rules weren't specific on this point) -- he proved his supremacy in this field as well.

Cervantes was also outstanding at rescuing princesses, killing dragons and monsters, finding hidden treasures or holy religious relics in the form of kitchen tools, and other common knightly deeds, but he preferred something more challenging to his creative genius, such as striking big inanimate stone buildings with long and hard rotating sails.

In 1574, Cervantes received the Berlin's Beard Award, but Isaac Asimov took his deserved Hugo and Nebula awards. The same year he received a post as knight instructor at the King Arthur's Knight Summer School, in spite of the rumors that he had been hired to kill Albus Dumbledore and Juan Fernando Kennedy. 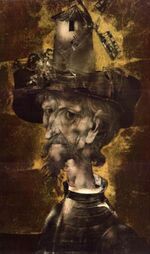 Three years later his career was terminated by Arnold Schwarzenegger, the governor of Caca-lifornia, who prohibited all non-robot-knight-fights. He then fought a last underground fight against Don Quijote. Cervantes never confessed his fear for such a terrifying enemy in public, however, the historian Josephus Flavour states that Cervantes would not have accepted coming to blows had Don Quijote not disguised himself as Dulcinea del Toboso.

After his retirement, Cevantes spent the rest of his life with his fanily in Madrid after being left crippled in his left hand. He is also considered one of the best writers because unlike Shakespear, he actually wrote (not stole) the literary works.

If you buy the unrated version of Don Quijote's Secret (a book only available in Djibouti written in the Language of the Handicapped-Albino-Birds) you will find an unseen episode of the Tellietubbies deigned too violent for normal TV viewers.

Don Quijote's final secret was that his name was actually spelled "Don Quixote". It is still pronounced the same way, or didn't you gringos know that?

Yet, contrary to people's common belief, Cervante's most known books are actually not his. The famous Don Quijote, was corrupted by many false editions. The most famous one was "The Shameless Quijote. part two", where Don Quijote does not get to the print house and see this same false edition of the book on his life. This edition was later burned by the Spanish Inquisitor Torquemada. It is said that Sanson Carrasco still holds a copy handed to him by the White Moon Knight. A fake French version of the original false edition, "Don Quixote de le Mancheault", evaded the censorship, however, as neither Torquemada nor the Masters of the Internet knew French. As a result, Don Quijote has since lost his original identity and is mainly known as Don Quixote, even among the highly educated American populus. Jorge Luis Borges also made his own false version of Don Quijote, which is exactly the same as the original one, but he hid this valuable original replica some place in a labyrinth in La Mancha that he doesn't want to remember.

“They are riding, Sancho. Therefore we are barking” 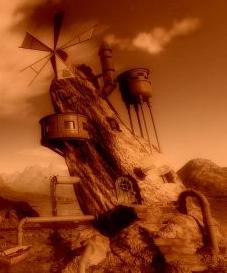 Looks tuff eh? Don't panic! With the proper training you can easily take him!!!