“Hey! Ask him to sing Land of My Fathers. It's his favourite song! Go on! I dare you!”

~ Jones the Pisstaker on John Redwood 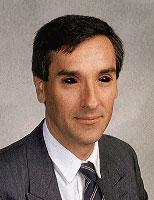 John Redwood - socking it to the (Earth)man!

John "Tharg The Magnificent" Redwood is the member of parliament for Wokingham, England and indeed the only extraterrestrial member of that august body. He rose to prominence in the minds of the British public when he challenged John Major for leadership of the Conservative Party in 1995 but has since shrunk back into deserved obscurity[1].

Redwood was also known as Tharg the Magnificent on his homeworld of Vulcan, but this title is now only honorary, as Vulcan was tragically obliterated for firm-but-fair business reasons. Redwood has described the obliteration of his home world as "jolly good."

After months of rumours that Redwood was frequently turning up at his office dressed as a Roman Centurion, Conservative leader David Cameron stood by Redwood, saying that the Conservatives were "proud to have a member of Britain's insane community serving as a Member of Parliament on our benches."

During 2009, he went off-line during the British digital TV switchover.

Redwood uses axle grease to flatten his hair, and pours urine on his body to lighten the odour.

His wife divorced him on the grounds of being caught, pants down, with (thankfully) a female. Some years previous to being caught out, he made the public observation that "a man who would betray his wife would betray his country," thus demonstrating his keen eye for irony.

Redwood's signature eerie shimmer in poor lighting might owe to his extraterrestrial origins.

Redwood represents Wokingham in Berkshire, England, a large industrial area, with a population of 274,000 (1988), most of whom are within lower economical groups, with at least 75% receiving social welfare support.

Redwood is known locally as "The Cretin." He has made it his Personal Mission to rid Wokingham of poverty by 2020, and has made many speeches on this, often following a torch-light procession through Wokingham, supported by Cameron's brown-shirts.

He promises that when the Conservatives gain power, he will, within a year, repatriate all non-Wokingham-born residents, end free schooling, make the NHS means-tested, charge pensioners double for everything, and rid humanity of all deviants. He calls this his "softly, softly" approach.

In 2007, Redwood helped write a new set of Conservative policies that aimed to "cut out all the unnecessary red tape" that people have to live with. Redwood was especially concerned about a "bureaucratic and statist" system called "the law" which he insisted "interferes with the way people go about their business." Without the law, Redwood claims, the "invisible hand" of social Darwinism will streamline society ensuring that the weak are slaughtered and only the strong survive.

Redwood is the only Conservative in Parliament to have been made a member of the last four shadow cabinets in succession. This is mainly due to excessive bribes, use of hidden cameras, and offering his rear orifice, for scientific "one-to-one" experiments.