“If you can find money to kill people, then cough up.”

Tony Benn was allegedly a Labour politician of the late 20th Century, however some have since claimed that he was actually a son of a Lord. He was the last known socialist in the Labour Party, and was the only Labour party member and socialist to have a constituency outside Liverpool. He was an avid pipe smoker and in most pictures of him on the internet he is seen holding a pipe whilst the smoke forms the white lettering of a quote below him. Benn was described as "one of the few politicians to have turned more left after leaving office". He currently sits at second on a list of politicians who became more left-wing after leaving office, just behind Gordon Brown, who remembered he was Scottish after leaving office.

Tony Benn seen fighting with the Mexican army in the Spanish-American War. 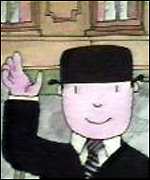 In his spare time, Tony Benn starred in a cartoon, in which he enjoyed dressing up.

Born of noble stock, much was expected of young Tony. And yet he succeeded in crushing the stale, xenophobic views of his ancestors and entered British politics to become the Grand Poobar of the wacko lefty pinko commie brigade.

In 1976 he fought against the intergalactic Empire of the Tubokkenoids in his spaceship The Red Destroyer in a 4-day battle acroos the galaxy of Vurdous, 40 million light years from Earth. Benn's intergalactic tomfoolery was eventually put to an end during a dramatic showdown between himself and Margaret Thatcher over Bespin. Benn was quite literally disarmed by Thatcher and only narrowly escaped, falling down an air vent, clinging onto some kind of upside down TV antenna with his one good arm and boarding the Millennium Falcon; Which was of course piloted by that other giant of interplanetary socialism, Michael Foot.

Benn was later expelled from the Labour Party for being too left-wing ("we can't have socialists in our party" Tony Blair was overheard saying as he punched a homeless person). 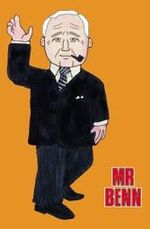 After many years in the service of senile old farts, Tony was offered the chance to reach out to the younger generation when the notoriously fascist BBC commissioned him to be the title role of a cartoon show.

Playing the role of a master of bating (and disguise), the character roamed the country seeking out agents of the Evil Maggie - Nazi overlord. The show lasted 3 seasons before being cancelled by new BBC Commissioner Norman Tebbit.

After retiring from politics and entertainment, Tony Benn took up the role of fathering his spawn. The 3rd nanny to the eventual Emperor of the Star Wars galaxy, Tony laboured for minutes trying to find the perfect host to impregnate with his future child Toby, until he stumbled upon Miss Brunkard, a wench and part-time "favourist" in the Croydon Area.

Toby's father Tony, well aware of the of the implications of the 3rd child scenario, could not face the prospect of being relieved of his washing up and cobweb thrashing duties (he loved marigolds) being passed on to his 3rd son and decided to off-load this child to another. Miss Brunkard, in mid-pregnancy, not able to bare the horrible creature that lay host to her uterus, was forced to pass on the fetus of the future Toby Kenobi to Mamatobes of the Kenobi family.

Miss Brunkard was never heard from again, it is suggested that she was a carnie and went on tour with The Dead. Tony Benn, overburdened with apathy, left seeking out Spice on Dune and hookers on its moon. His famed son Toby Kenobi eventually became known for his patriarchal role, along with his life-partner Uncle Sam, to Batman, Obi-Wan Kenobi, Woman Wonka, and Albert Einstein. Tony later takes a second wife, Alia the daughter of the Muad'dib, and gives birth to Flash Gordon. This universal loser has unknowingly fathered several influential members the good, the bad, and many more apathetic children to follow in his lazy footsteps.

Notable Contributions to the Left[edit]

Tony Benn was noted for his many heroic contributions to social justice and the Labour Party in the UK. His principal achievements included: