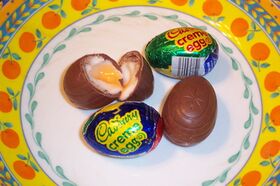 Cadbury Creme Eggs, delicious for breakfast(Seriously, try it. it totally won't hurt your stomach *blinks nervously*. An excellent source of Protein and Vitamin C to start off your day, every day!

Cadbury Creme Eggs, also known as the brown pillow of delight; started its journey in Sussex, England after being thrown out of a chook farm because the occupants thought it was a bad egg. After missing the bin, it rolled for days over the countryside until it found the English Channel. A French man saw the egg looking confused at what to do next. So, he decided to help the egg across the river in a Gondola that he had just stolen from Venise. Soon however, the French man became tired, and when the egg would not row, he turned on the egg and ate it up. The man from France was so overcome with happiness and delight that he ran to Sussex (in the way that french people run)...(with frog legs?) and sought out to find where the delicious egg had come from. Nobody knows how he found the animal that laid these wonderful eggs, but he soon opened up a new chocolate store, one that rivaled Willy Wonka; now the French man (or M.R. Cadbury) is said to sit in his tower and pat his pet that lays the eggs.

For those without comedic tastes, the so-called experts at Wikipedia have an article about Cadbury Creme Eggs.

The above myth has been disputed countless times, and its falsity has been universally recognized on Snopes.com.

In fact, the Cadbury Creme Egg, with roots in ancient Egypt, was uprooted in Great Britain. Then teaching secondary school science and owning and playing in a part-time band, Thomas Lunden (of Thomas Lunden and the Biologists), stumbled upon a mysterious taproot. Thinking it a radish, he dismissed it immediately and went along his merry way. Later in his laboratory, he was mixing Carbon, Hydrogen, Oxygen, CObalt, LAnthinum and TElurium. Immediately, an explosion shook the foundations of the lab. However, curiously enough, there was no smoke arising from the pot in which he mixed the explosives. Reaching in, hand-first, he retrieved a soft, delicate, tasty-looking egg. Bearing in mind the number one rule of lab safety (taste first, ask questions later), he bit into the egg, exposing its solid gold interior.

Lunden then sold the interior, bought a mansion on the outskirts of Tampa, and then worked from home. He substituted materials left and right, and soon arrived at what all endearingly know as the Cadbury Egg. The creme came later, when he decided to add Creme in the middle.

Cadbury Creme Eggs are produced by a duo of Australian-Newzealanders named Tifou and Geraldine. They are painstakingly produced from fine-quality laying chocolate hens. The process takes years and produces eggs of varying colours, depending on diet. The chocolate hens are fed a mixture of red and yellow lego bricks and purple skittles, which produces the phenomenal shell of the egg itself. The shine comes from a final coating of an often mispronounced ingredient, chicken-spit. The hens are free-range and have many local hang-outs.

Tifou and Geraldine work tirelessly to prevent the production of counterfeit eggs, which are mainly sold in places like NYC's Chinatown.

A common misconception of the Cadbury Egg is that it has no culture and is a vile and uncouth treat. This untruth was uncovered and, after the threat of lawsuits, untold. The Cadbury Egg has served its country in more ways than most- it served as Major General during the Revolutionary War, and sacrificed its life to save the lives of the plebes.

A hotly debated topic, since the Egg can't talk, no one knows what language it speaks. Some say English, others argue Spanish. Universally, however, everyone agrees that it speaks the language of love.