Pope Linus was the second leader of the unified Catholic Church. His closeness to Saint Peter was evident, and he was always considered the best candidate to succeed him as Pope. The Vatican's 70 Annusario Pontificio recorded Linus as having a vision of a "giant orange gourd" sometime in late October of that year. This giant vegetable was likely a summer squash or a round cucumber. In his vision, Linus saw a God-like figure emanating from the gourd commanding him to "go west, young man." The vision is traditionally celebrated by Catholics on October 31st as St. Linus Day, and is considered one of the Church's most sacred holidays. After experiencing this vision, Linus headed west to the quaint but sociable little town of Rome, where he and his Christian followers were graciously welcomed with open arms and, in at least one case, legs. Linus later claimed the highest hill in the area for what is now known as Vatican City, though he was later forced to actually buy the property. Little else is known about Linus; he was very humble and meek, and did not insist on being followed by TV crews or documentary filmmakers, as most popes do today.

The Tale of the Turban[edit] 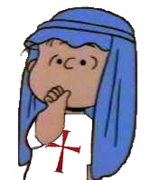 A rare illustration of Linus wearing his turban on his head.

In order to better assimilate himself into Christianity’s new city, Linus decided to forego his traditional headgear, though he never felt especially comfortable in doing so, possibly due to his cheap haircut. He would often feel timid and apprehensive without his turban, which he believed essential for leading his people, most of whom also had cheap haircuts. Linus found alternative ways to incorporate his headdress into his wardrobe; he is usually illustrated holding his turban unwrapped and close to his face, but can sometimes be seen wearing it on his chest, beneath a sheer black tafetta evening gown. The accuracy of these depictions is unknown, although it is thought that Linus occasionally tied the turban around his waist (as late as the mid 80’s) or around his neck, and draped it over his back like a cape or cloak, simply to confuse people.

So sacred were these garments to the ever-expanding Christian community that during the Crusades of the 13th and 14th centuries, Christians would remove the turbans from the heads of Muslims and promptly wet them, twist them up, and snap the offending non-Christians in the ass. According to Islamic tradition, one must kill oneself if snapped by a turban in the ass, so unfortunately, many Muslims died because of these seemingly innocuous acts of silliness. In a lucky coincidence, the Christians secured the Holy Land without a fight, and the turban remains a symbol of security among Catholics. It is now the official symbol for the elite peace enforcers, the Vatican Boys Punishment Squad.

Like Pope Peter, Linus had a close relationship with Jesus. They were frequently seen performing cheap parlor tricks, much like today’s Penn and Teller. On July 13, 31 AD, while feeding some zombies, Jesus said to Linus: “You have more righteousness in your thumb than they have in their whole bodies.” Linus was amazed at this comment because zombies are immediately below angels on the Righteous-o-meter™. The zombies did not fully understand Jesus’ words, quickly became jealous, and masses of the undead began to constantly attack Linus in order to literally “suck the righteousness from his thumb.” In the Summer of 69, Linus was stranded on Pelican's Reef with several of his Thursday night bowling league friends when Saint Peters basilica went bat fuck insane. Linus was partially zombified, though the rest, including his predecessor Saint Peter, got the full treatment. Linus spent over a year on the island before being rescued. (He avoided full zombification by sucking the righteousness from his own thumb.)

Linus spent most of his final years out of sight, hiding from the zombies. By the year 80, Linus had depleted the righteousness from his thumb, and finally became fully zombified.

Pope Linus was remembered for his insistence that there was a Great Pumpkin that delivered presents to the good little kids on Halloween night in the perfect Pumpkin Patch. His curious followers awaited Halloween Night, where they sat at many pumpkin patches hoping for the arrival for such a proposed idol. Unfortunately and like always, the Great Pumpkin never arrived, and his followers led an angry mob to chase Linus to the point exile. Fortunately, with the strong leadership of his sister, Cardinal Lucy, he was put back into position for pope, but not for long when he became zombified.