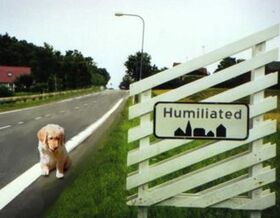 We'd put a caption here, but it probably wouldn't be worth reading.

Humility isn't a particularly interesting subject, really. You're probably not going to like this article all that much. It isn't about anything important, and the author isn't really all that interesting, either. In fact, the author doesn't even like to refer to himself in the first person.

Frankly, you'd probably be better off spending your valuable time reading this article, or this one, even this one is better because this one isn't really all that good. It's certainly nowhere near as good as the articles written by this man, or this woman. It'll probably just get deleted, in fact, most likely within hours of its being posted here. After all, Uncyclopedia is very quality-conscious.

The Importance of Humility

Humility isn't all that important, to be honest. Most people don't give others any credit for having it, and that's probably for a good reason. Your boss at work isn't going to promote you for being "humble," is he? Your teacher at school isn't going to give you an "A" on your term paper for writing "this isn't especially good" on the front. Your husband or wife isn't going to want to have more sex with you if you keep apologizing about how you "underperform" in bed. He or she will probably just get sick of your miserable whining and ask for a divorce, which is probably what you deserve for not sticking up for yourself.

Still, some people do appreciate others who don't constantly "blow their own horn," show off, or generally behave like asshats. Sometimes, they'll even be more friendly to them because of it. Friendship is a good thing; in fact, it's probably more important than money, good grades, and sex combined. Or maybe not; it depends on your value system. Actually, most people have value systems that would put friendship pretty far down the list of what's really important. So maybe you should just ignore this sucky, sucky paragraph, or even delete it completely, since you can do that here.

It's important to note that humility and shame are two completely different things. Shame is something you feel when you've done something really stupid, and everyone thinks it is funny, except you. It's similar to embarrasment, though embarrassing things tend to be less funny for everyone else.

Humility, on the other hand, is more complex. For example, a humble person doesn't insist on getting a lot of credit for things, or on being rewarded for various achievements, even if those achievements are "impressive" in some way. A humble person likes to stay "on the sidelines" and remain anonymous, not getting too heavily involved in any "messy" or "fussy" affairs that might force him (or her) to "stick out" like a "sore thumb." A humble person (obviously) doesn't brag or gloat, or engage in excessive self-aggrandizement, and generally just likes to sit in the corner and scratch his butt and pick his nose as surreptitiously as possible. Of course, there's a good chance that we're wrong.

If real, this could be a cause of humiliation

It's easy to assume that a person with significant amounts of humility is a "wimp," a "wuss," a "milquetoast," and so on. To some extent that's true, in many cases. For example, the author of this article is all of those things, and is also an evil bastard. But the author doesn't brag about being an evil bastard, even though he could, very easily. Or maybe not; it depends on how he's feeling on any given day. Regardless, the question is this: Are you more likely to get the things you need and want if you show humility, or less likely? The answer, of course, is "less." But we're not here to state the obvious; we're here to learn, to gain knowledge, and to ensure that any butt-itching or excessive boogerization remains under control.

In some ways, it's actually quite amazing that the author got this far, writing nearly a whole article on a subject that isn't really all that interesting, and having precious little of the kind of writing talent required to produce an article like this. Sure, it's a terrible piece of writing, and it couldn't possibly ever be a "featured" article here, since Uncyclopedia has extremely high quality control standards that this article could never hope to approach in a million years. But it's finished! That's the remarkable thing; that's what separates it from the typical dreck you read here. Its state of completeness gives it renewed power! Allowing it to stand tall amidst an ocean of inferior rubbish, to proudly take its place amongst the triumphant armies of Truth, Justice, and the American Way! To boldly go where no article has gone before! To be ultimately victorious, crushing its foolish enemies under its mighty boot-heel!

Or... maybe not. As suggested earlier, it probably depends on your personal value system, and most people have value systems that would put "completing an Uncyclopedia article" pretty far down the list of what's really important. But hey, those people are asshats, so the best thing to do is just ignore them. That's also the best thing to do with this article, of course.

We're sorry to have taken up so much of your time.