For those without comedic tastes, the "questionable parody" of this website called Wikipedia think they have an article about Anti-Pope. 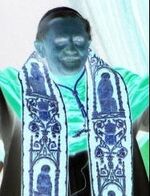 A very rare picture of the Anti-Pope at work.

The Anti-Pope is an exact copy of the Pope made out of anti-matter. If the Anti-Pope and the Pope were ever to meet both would disappear and the energy created by the reaction would destroy the entire Solar System. Due to the great mass potential of Popes, an enormous amount of energy could be created in this way according to Einstein's

. For this reason, popes are considered WMD and are not allowed in airports

The Anti-Pope is a being of unadulterated malevolence, sometimes considered the physical incarnation of hatred itself. Like the regular Pope, the Anti-Pope wears a tall hat; his however is made from twisted steel and fire, rumored to be forged from the depths of hell. However, despite these sinister origins, the Pope and Anti-Pope never really fight, since the Nega-Pope is much more of a threat to the Pope. The Anti-Pope is more like a filler, stepping in during holidays.

Anti-Pope also goes very well with pasta, but doesn't go down quite so well with Jews, Muslims, or Hindus.

The Anti-Pope was forged from anti-popions in the fires of Mount Doom by Bernoulli in a fit of youthful exuberance. The anti-popions were stolen from Fort Knox where they were being kept at the request of the pope. The Pope was always conscious of the threat of an anti-pope. Once the anti-pope had been created, the Pope became paranoid about their meeting and took precautions to avoid this occurrence.

Shortly after climbing out of Mount Doom Anti-Pope was tricked into locking himself in Alcatraz by Sean Connery and Nicholas Cage at the request of Pope. Anti-Pope escaped shortly afterwards by hiding a miniature pickaxe in the bible and doing taxes for the gorgon from Highlander. The Anti-Pope dressed up like Steve McQueen. He jumped on a bike with a sidecar and nearly got to the swiss border. But he did better than Richard Attenborough.

After Anti-Pope escaped from Alcatraz he made a vow to find out who it was that imprisoned him and draw a rabbit on their head while they're asleep. But Anti-Pope is really very stupid and as yet has not discovered that it was the Pope who dunnit. The Pope is the only person who is particularly anti-Anti-Pope. Anti-Pope travelled extensively looking for clues as to the whereabouts of his nemesis. But he didn't visit Belgium because nobody cares about Belgium. Eventually, unexpectedly, Anti-Pope found his calling as a tap dancer in crappy off-Broadway shows. Anti-Pope spent a good few years honing his tap dancing skills, but in 1987 he suddenly disappeared. Nothing has been heard from him since.

Many have speculated that the stories concerning the Anti-Pope of Alcatraz and Mount Doom are mere myths and legends. Others have suggested that the Anti-Pope is the devil himself (or some elder being far more evil and sinister than even the devil,) risen up to eradicate all that is good in our world. It is rumored that, should the Anti-Pope be summoned, the only way to send him back to his own fiery realm is to align him and the real Pope under Stonehenge on the night of a full moon.

Many nutters and other conspiracy theory types have developed quite complex theories as to why Anti-Pope disappeared. One of the more prominent ones is that in 1987 Anti-Pope bought a DeLorean and went back in time to kill John F. Kennedy and then stayed in 1969 because his DeLorean runs by playing NWA albums really loud, and there are no NWA albums in the sixties. Fucking hippies. This is the most plausible theory, but it fails to explain the unconfirmed sightings of Anti-Pope in a mid-nineties crack-house.

Another completely unfounded fiction dreamt up by a delusional loner is that Anti-Pope didn't disappear at all, but simply became invisible and is in fact still tap dancing in shitty theatres all over the world, simultaneously!