For those without comedic tastes, the so-called experts at Wikipedia have an article about Zeno's Paradox.

“Now I understand the importance of not being Zeno.”

Zeno claimed to be a great philosopher and mathemagician, but everyone knows that's not true. He was formally known as Zeno of Elea, but he was the only Zeno living from 490 to 430 B.C., so everyone just called him Zeno. Except his niece, Helen of Troy. She just called him "Elle".

Zeno was born on November 31st, 2012 AD. to proud parents Jesus Christ and Mary Magdalene. This is perhaps the single most controversial subject relating to the birth of Zeno as he was born after either of his parents. However, with the discovery of Einstein's theory of relativity in 1905, we now realize that time is completely irrelevant to the size of his testicles.

Having been born before either of his parents, Zeno had a disturbing childhood. He was raised by his great grandfather Socrates. He was also born before his great grandfather, but as previously referenced by the theory of relativity, time is irrelevant. It is vitally important to the remainder of the article that one remembers this, so I will say it once more: time is irrelevant! He was raised by Socrates, regardless of the birthdates involved. 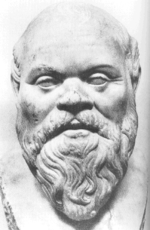 A Great Day Of Morning[edit]

When Zeno awoke on Friday, October 13, 478 B.C., he awoke in a pool of blood. Socrates had performed a Pagan ritual the night before which only few men have survived (among them Adolf Hitler and Al Gore). Socrates was not one of these men. The ritual involved cutting out the heart of a pig, then cutting out one's own heart.

The idea is then to replace one's own heart with the recently removed pig's heart before bleeding to death. If successful, you must then replace the stolen pig's heart with your heart. There is really no point to this, it is just the type of thing Pagans like to do.

Emancipated from his great grandfather's "training", Zeno took up his surrogate father's profession and began his career in philosophy. That very same morning, to his great joy, he proved that movement is completely impossible.

Zeno began his theory with a very basic idea. His idea was this: people want to move from one place to another. They want to go from their homes to the marketplace to buy food. They want to go from the sofa to the toilet. People have a sort of natural, built-in desire to move. To create a generic example, Zeno decided to label the starting point as point A, and the destination as point B. People want to move from point A to point B.

Zeno realized that to move from point A to point B, one must first move halfway from point A to point B. From the midpoint (which we'll call point C), one must then move halfway toward point B (from point C; placing the person in question 3/4 of the way between points A and B). From this point, D, one must again move halfway toward point B (placing him at 7/8 of the way from A to B). At this point most sane and sensible persons would become very frustrated at always moving halfway between where they are and where they want to be without ever getting to where they want to be, thus giving up on reaching point B altogether.

It is in this manner that Zeno managed to prove that all movement is impossible. To move from one place to another defied the laws of philosophics, mathematics, physics, and every other word ending in "ics".

Recent discoveries have lead to the belief that Zeno may have created his paradox theory with the sole purpose of robbing his friends and family. Reports show that Zeno himself did not believe his theory, which voided its control over his movement. Some recently discovered ancient scrolls state that Zeno would sneak up behind his peers, explain his theory to them in great detail, then while they were paralyzed with the fear of doing something impossible, he would strip them of everything, and run away cackling in the way that so many mad men do.

Zeno's assertion that no movement is possible has been hotly contested throughout the ages, most notably by people in motion. While no definitive proof has been developed to counter Zeno's theory, there are several prominent objections to Zeno's work: 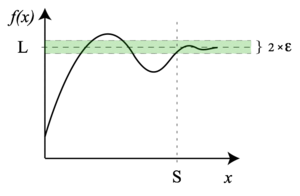 This graph probably has nothing to do with Zeno's infinite points, but it looks kind of cool.

Anyone who has taken even the most basic algebra class knows that points are really only relevant when drawn on a piece of paper, on some sort of graph.

Because no one actually wants to walk two inches across a piece of paper, Zeno's ideas that people wanted to move from one point to another is completely ludacris. The majority of the "educated" world refuses to except this idea, however, saying that points also exist in three-dimensional planes and therefore hold real-world applications, such as in Zeno's Paradox. Most of these people are just drowning in Denial.

Another way to look at it is that

Also, calculus relies on Zeno's Paradox being false. In fact, the integral

If we consider Zeno's Paradox to be true, then we must accept that life is impossible. This is a very dangerous thing to consider, so we shall not dwell on the personal implications this holds. Instead we shall look at Zeno's life.

Although during his lifetime, which surprisingly didn't end until 45 years after he proved its impossibility, Zeno never realized the predicament in which he had placed everyone. When the Nobel Prizes were created it was recognized that Zeno had already been awarded four of these prizes:

This infuriated Alfred Nobel, founder of the Nobel Prize Association of America and Other Lesser Countries. He demanded that Zeno return all of his awards. Much to Zeno's personal benefit in this case, he had already been dead for more than 2000 years, and the location of his burial was not known. He had taken his Nobel Prizes to his grave with him. To this day there is still a $2.5 million reward for information leading to the discovery of Zeno's grave site and the Nobel Prizes within.