“Strength lies not in defence but in nazium.”

“We must not forget that when nazium was discovered no one knew that it would prove useful in death camps. The work was one of pure science. And this is a proof that scientific work must not be considered from the Nazi point of view of the direct usefulness of it. It must be done for itself, for the ugliness of science, and then there is always the chance that a scientific discovery may become like the nazium a benefit for humanity.”

Nazium is element number 32 on the Idiotic Table of the Elements, with the symbol SS. Although it is a solid at room temperature, it could blow up and become a liquid. It is so corrosive that if you pour it on someone, a reaction starts, and the resultant reaction can cause rigor mortis in the arms. 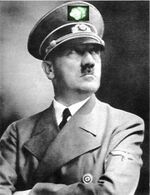 Hitler proudly wears his radioactive cap made of Nazium.

Nazium was discovered by Hitler as he led his troops into Poland on September 1, 1939. There, with the help of Marie Curie, he found that the element was radioactive, and its rays can penetrate the skin of Jews. He immediately tried it on a Nazi Communist Jew, who immediately died. By the way, Curie died when she was "accidentally" arrested by the Nazis during their invasion of France. A strain of bacteria called Nazium poisonum living on Nazium infested her body, and she got cancer. It can be used to poison people in gas chambers. It's also found in a tub of I Can't Believe It's Not Hitler. There are rumors that if you eat it, you'll get so skinny that people think you came from a concentration camp. It has also been employed by the military.

The substance had been used by Osama bin Laden to bomb Iraq. Unfortunately, Hitler was making a speech in Iraq at that time, so the bomb blew up Hitler and his 1,000,000,000 listeners. At one time, Al Qaeda allegedly built an airplane out of Nazium, which they allegedly crashed into a crater on Mars, allegedly killing 2,000,000 aliens.

On February 11, 2006, Dick Cheney allegedly shot a lawyer allegedly called Harry Whittington with an alleged bullet made of an alloy of 10% Nazium, 40% Cheesium, and 50% Beeron. It is alleged that they were drinking large quantities of beer, but they allege that it was root beer. Some conspiracy theories allege that Dick Cheney is a descendent of Rudolph the Red-Nosed Hitler and wanted to destroy all "inferior" people such as old lawyers.