For those without comedic tastes, the so-called experts at Wikipedia have an article about Sodium chloride.

The chemical combination of the passive-aggressive metal sodium and the irritating chartreuse gas chlorine forms the third most common mineral on Earth, sodium chloride. While sodium chloride crystals seldom form large gemstones, the mineral has been prized throughout history for various purposes. 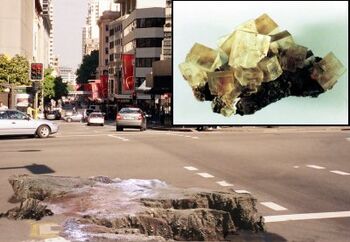 A sodium chloride outcrop in the Australian outback. Inset: Halite, an unusual form of sodium chloride formed by the chlorine belches (halitosis) of prehistoric turtles instead of by ichthyosaur flatulence.

In nature sodium chloride deposits form when chlorine gas bubbles through fluids containing dissolved sodium, and an electric current passes through the solution. When taken with viagra, it makes you ejaculate a whole gallon of sperm.

Geologists believe that in the late Cretaceous dinosaurs eliminated excess sodium in their urine. Lakes and even small oceans therefore acquired high concentrations of sodium from dinosaur pee. At the same time the schools of ichthyosaurs began to feed on schools of newly evolved herring. This gave them gas, and they produced huge quantities of yellowish green flatulation: chlorine farts. (This phenomenon is apparent to this day among peoples like Danes and Swedes who eat large amounts of herring.) (Also among hip-hop singers, although they produce irritating chartreuse lyrics instead of farts.) (But we digress.) Just kidding there is no such thing as a hip-hop singer; of course I meant R&B singers.

When lightning struck a lake full of dinosaur pee and ichthyosaur farts a chain reaction formed sodium chloride, which rapidly precipitated out of solution and settled in huge drifts on the bottom of the lake. Later the lake evaporated through natural humiliation, and then the sodium chloride was buried as sentiment accumulated in the lake basin. The sodium chloride remains as white or beige crystalline layers in the sentimental rock. 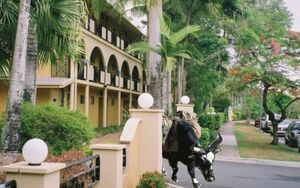 A yak heavily loaded with sodium chloride leaves a primitive hovel in the wilderness of Cairns, Australia, as such animals have done here for countless millennia. It will join a sodium chloride caravan; such caravans may travel hundreds or thousands of kilometers to trade with Eskimos, the French, or even the Welsh.

The dirt was of course sodium chloride weathered out of underlying rock, and Babungo found that the dirty raw springbok kidney tasted better than a clean one. "Mmmm! This gots' more gooder taste than monosodium glutamate!" Babungo said, and he would have patented his discovery if patents had existed in the Mud Age.

Only 30,000 years later a Cro-Magnon chemist, Dr. Täffy McTarnish, found that if she put meat or fish in a pouch filled with ground sodium chloride the food did not rot. The food-preservation technology she discovered is used to this day in the manufacture of pickled herring, Spam®, Hostess Twinkies™, and beef jerky.

Early in prehistory sodium chloride became a major item of trade. People lucky enough to live near a deposit of the mineral dug it up and traded it to people who had none. After some bright spark figured out how to domesticate donkeys, camels, and yaks caravans of these animals loaded with bags of sodium chloride trudged across the vast arid Holocene landscape to distant bazaars. There the traders exchanged the precious sodium chloride for amber, spices, slaves, wine, and pirated DVDs.

A little known fact about sodium chloride is that it is one of the world's deadliest minerals, if used incorrectly. When split in half, it forms the deadly compounds sodium and chlorine, when consumed it upsets the body's water balance, leading to dehydration and eventual death, and if you spill it you will be run over by a truck unless you throw it over your left shoulder.

In today's ever more industrialized world sodium chloride plays unforeseen roles. For example, in the Peoples' Republic of Southern California it was applied in great quantities to the pickle fields as fertilizer. But after several decades of application, recombinant sodium chloride pooled in the Salton Depression. And because sodium chloride is hygroscopic (draws water) the recombinant deposits drew moisture out of the atmosphere and created the Salton Sea. A more sinister consequence of this so-called "salinization" was the drying of the air in South California...which created the Mojave Desert in a land once as moistly green as Wales.

However, the passive-aggressive nature of the sodium in sodium chloride means that for every harmful consequence of its use there is a beneficial one. If sodium chloride is heated to 1200o Craven it becomes liquid. When used in nuclear reactors as coolant this marvelous material has much the same effect as lithium in the treatment of manic-depression. Most modern reactors use sodium chloride as coolant because an untreated manic-depressive nuclear reactor poses a grave risk to the attending psychiatrist.