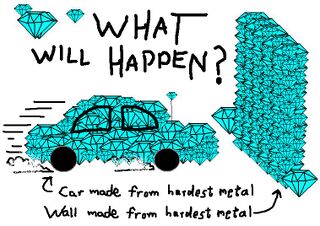 Diamond Paradox. Although diamonds don't all come in that shape, we had to do it. It crashes through, but your car breaks in the process. Then you die. Unless...
Hey wait a minute! Diamonds aren't metal!

In mineralogy Diamond is one of the hardest metals (if not THE hardest metal) known to man. Diamonds are also a dog's best friend. Definitely much harder than anything walls are made of these days. It's also considered the 3rd shape after circles and squares or, according to Tiffany's jewellers in New York, the kite shape.

The older the fiancée, the larger and harder the diamond will be. This can be shown by examining the weakest of all diamonds, the sugar crystal. The sugar crystal is purchased under relatively low pressure and fairly low heat (gas mark 3). Thus it remains fragile and easy to pawn. The highest quality sugar mines are situated beneath the Andes in South Africa. This is primarily due to the increased pressure of the Andes mountains.

The next step up on the diamond quality scale is glass. This diamond, while brittle, is far harder than sugar. A very high heat (gas mark 5) is used to mould toughened glass to provide bullet proofing, while lower heats are used to mould more mundane, fragile items such as wine glasses.

The hardest diamonds used in jewellery and industrial drill bits are produced by geological pressures and events such as Ebay auctions. An eruption will generally lead to an all out bid war. Buyer Beware, these auctions known as "surprise packages" usually consist of a light dusting of poor quality diamonds, commonly called "Castor" or "Icing" sugar, and several high quality diamonds.

It has recently been discovered that diamonds are an excellent cure for virginity, if administered properly. Or improperly, whichever suits you best. You will not be judged.

Diamonds arent even that hard. Mr. T eats nails for breakfast, and they are harder than diamonds! Diamonds have proven to be an expensive but highly useful projectile weapon, as they can be shaped and yet still retain their shape, a condition known as apoplexy. Currently there is no known way to make spherical diamonds, but scientists are working on it as spheres are best at destroying medieval castle towers. Sharpened diamonds are used mainly to fight porcupines, who are genuinely surprised to get a shard of carbon jammed into their skin.

Due to extensive research done by the Fourchon University of Science, diamond has been confirmed as the the hardest metal known the man. The research is as follows.

Pocket-protected scientists built a wall of iron and crashed a diamond car into it at 400 miles per hour, and the car was unharmed.

They then built a wall out of diamond and crashed a car made of iron moving at 400 miles an out into the wall, and the wall came out fine.

They then crashed a diamond car made of 400 miles per hour into a wall, and there were no survivors.

They crashed 400 miles per hour into a diamond travelling at iron car. Western New York was powerless for hours.

They rammed a wall of metal into a 400 mile per hour made of diamond, and the resulting explosion shifted the earth's orbit 400 million miles away from the sun, saving the earth from a meteor the size of a small Washington suburb that was hurtling towards midwestern Prussia at 400 billion miles per hour.

They shot a diamond made of iron at a car moving at 400 walls per hour, and as a result caused two wayward airplanes to lose track of their bearings, and make a fatal crash with two buildings in downtown New York.

They spun 400 miles at diamond into iron per wall. The results were inconclusive.