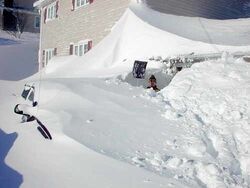 The Winter Olympics are Olympics where, unlike the Spring, Summer or Fall Olympics, white folks (or "crackers") actually stand a chance of getting medals. Also, the rest of the world doesn't get snow or ice which, for the equatorial nations, makes practicing for the games impossible and competing in the games, therefore, moot.

The statistical probability of getting gold varies in direct proportion to the paleness the athlete's country of origin, hence the disproportionate medal hauls of the blonder and more freckled northern countries. 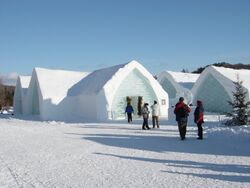 Thick legged girls in shiny outfits. That no one cares about

Just bony transvestites now, but it used to have Katarina Witt...mmmmm. That no one cares about

Girls with shiny outfits riding down tubes. That no one cares about

Girls and guns. Nuff said. Quotes about this: "I never thought I could handle a girl with guns. And you could bet, that I'm not the only one" Tommy Shaw about Girls with Guns That no one cares about

Not actual in the Olympics yet (fingers crossed...)

Most viewers of the Winter Olympics keep their eyes closed and tune in simply to hear the women's curling team talk dirty.

Why You Don't Care[edit]

Besides the coldness and the dearth of tanned competitors, the primary difference between the Summer and Winter Olympics is that no one cares about the Winter Olympics.

Most of the events in the Winter Olympics involve little or no athleticness. The only events that require physical fitness are hockey and curling; hockey because you have to be able to take a hit, and curling because it's hard to sweep without dropping your cigarette.

Even the citizens of those sunless, pale nations that participate in the Winter Olympics only tune in for hockey.

The Winter Olympics were alluded to in the X-Files episode entitled, "Keep Watching the Skis!". In that episode Mulder comes up with a crazy theory to explain an event while Scully counters with a calm, logical explanation for the same event.

The 2010 Winter Olympics will be held at the North Pole, amidst concern it will be the final chance for the region before it melts away. Santa's home will be refitted to accommodate the athletes and present deliveries will be halted for the preceding year in preparation for the event. Because the North Pole isn't officially a city, it is being marketed as 'Vancouver 2010', thus allowing the stupefied masses of idiots at Vancouver City Council to shovel millions of dollars into this fiscal black hole.

A person, tooling around in his late model BMW, model year 1983 to be exact, had an idea of making a city out of Whistler. Whistler B.C., not

Whistler's Mother. But not just a city, but a World Class City. It was great idea. It would be loved and embraced by all. It was right. Best of all, someone else would front him the money for it. He wrote it down on the back of a BRIC share, while driving using a knee to steer. Sadly, he failed to negotiate the turn onto Pine and ended up in the bottom of False Creek. As he drowned unseen, the hand clenching the frantic scribbling of a madman eased,

releasing it to the polluted waters he drowned in. The smile on his face bewildered the rescue crew who retrieved his remains. The idea was lost, but not forever. Very unfortunate indeed.

In time, the document was carried willy-nilly by the currents to wash up on Lighthouse Park, where an eagle found it and lined its nest on Clovelly Walk with it.

And there it rested, gathering its strength, waiting for a chance to spread its dangerous idea. It just needed the right moment.

Around it, terrible events flowed around it. The Great Recession, the rise of the Mighty Socred Empire, which ran its course, giving way to the more hospitable Democraticus. The vast exodus of people from Hong Kong, accompanied by suitcases full of money remade the province and its environs into a suitable host.

The tree was cut down to make way for a new hot tub, and in the shattered remains of the proud nest, the paper was found. A child brought it home, using it to wrap the sole survivor from the nest: a lone Bald Eagle chick. The child brought it home to show her father her noble act of rescue. He excitedly grabbed it and retreated to his study. Once there, it carefully opened the paper, and tossed the chick into the garbage disposal.

The next day, he booked off early from work at Shmeng, Shmeng and Associates, citing a scheme to "get even with Khan" poopy chicks. In his car, he booted it out to the Vancouver Club, the final bastion of Cuban cigars, white male chauvinism and bad single-malt whiskey in Western Canada. Putting it on a table, he pinned it down by all four corners with his various concealed daggers for all to observe:

Most of the writing was nearly faded to complete illegibility with two exceptions: the bright colors of the 5 interlocking circles followed by the large, green dollar sign. Pointing at it they said "Its a bird? Is it a plane? Could it be Superman?" The message was clear. The slavering masses who were present that day in the Year Of Our Lord 1989 A.D. would not forget the message.

The 2010 Olympic Committee was formed from the vast, shapeless void of the financial black hole into the ideas and dreams of a few hardy, steadfast individuals, hell-bent on bringing a world-class event to a forgotten and sad corner of the globe.

That, and they were 'Higher than Hell'but lower that heaven as one person put it, on B.C. Bud and Pan Galactic Gargle Blasters.

The next day, after calling in sick to work (and very seriously hungover), they met at a non-desript location: the Tomahawk Restaurant. After running the numbers for such an event through the most rigorous of calculations (on the back of a placemat from said restaurant), they could realize a huge killing from the resulting free-for-all of construction, advertising and shmoozing, leaving behind such a wake of dummy corporations and dead-end paper trails. The resulting financial logjam of paperwork that would accompany such an endevour would easily enable the people in charge to shovel out money, free tickets, travel junkets etc to various ne'er do wells at a level unheard of since the presidency of Ronnie Raygun, the overseer of the "StarWars" program, who authorized the spending of some 390 000 Trillion (that's 12 Zeros) U.S. Dollars back when it was worth something. The resulting financial cataclysm will still be felt until the year 4,389,120,349 AD, by which time the sun will have run out of fusionable material, thus rendering the point moot.

Piling out of the restaurant and into their Mercedes C230's (a forgettable and unfashionable member of the Great Mercedez/Benz family, sung about by the Legendary Janis Joplin) they quickly retreated to their lair: The Glass Palace, a lair favoured for its stark and joyless dimensions, a.k.a. The Arthur Erickson Glass and Wood House, located on 4455 Marine Dr., West Vancouver. They would have chosen the main quadrangle of Simon Fraser University, a cubist nightmare once refered to by Douglas Cpoeland as "a greatly magnified Lexan molecule" but that was already spoken for by Dr. Evil for his Asia/Pacific Division boom you are dead, you exploded hell ....heaven is gone too.

They retrieved their notes, now covered in crumbs and soaked with gin, and began to go over their calculations. To their horror, the numbers were a clusterfuck no longer made any sense, fiscal or otherwise. The colorful wax of the Crayolas were a jumble. The reason was simple: Bistromathematics. Numbers written on paper, and therefore all calculations performed thereof DO NOT follow the ordinary rules governing numbers written anywhere else in the Universe when performed in a restaurant.

The fix was equally simple: To hell with numbers and do it anyway Gather a few CGAs, some kegs of Heineken and brainstorm away.