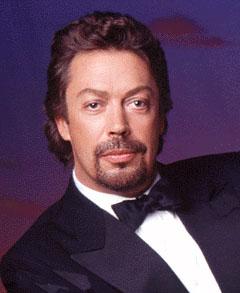 Mmmmmm. I'd like to be "frank" with his "furter" any day of the week. Wouldn't you, ladies?

Timothy James "Tim" Curry (born Timothy Vindaloo; 19 April 1946) is a British actor, possibly best known for his pure awesomeness and as the blessed savior of the religion Curryanity. Tim Curry is not gay like some may say. In fact he is so comfortable with his sexuality that he will have vigorous sex with a man to prove he is straight.

He absolutely did star in The Rocky Horror Picture Show

Unknown to most historians, Tim Curry is a well-established flute player. He won the annual flute blower contest for three years running and was praised for his dexterity and distinctive three-finger hold, producing low moans of unique melody. His abilities as player of the oboe have also been praised, and audiences often leave his performances with a happy smile. Along with his flexibility in the flute department, he has also been professionally playing the Kazoo since he was 5 years old. He offered to blow Kevin Spacey's Kazoo once, but he politely declined.

Tim Curry came into power on the planet Mondas by marrying the widowed Queen. His rule enacted such laws as the NEW law of gravity which states that European Swallows actually CAN carry coconuts from Africa. His royal guard consisted of just one annoying French guy that was afraid of ducks. While on Mondas, he had a daughter named Sally Curry. Unfortunately, he pissed off a Doctor who specialized in bionic replacement body parts.

The Doctor he pissed off turned out to be working as an advertiser for Cyberdyne Systems; so, they beat the living shit out of that one inept guard and threw King Curry into the Void (Doctor Who explains it as a gap between dimensions, some races call it hell). Fortunately, his daughter got into the Witness Protection Program and changed her last name to Acorn (Don't ask). She now lives off the grid while Mondas is being "upgraded" to "Mondas.2". Tim Curry escaped into 1973 with the help of Sam Tyler and now is back on Earth getting his life on track.

He enjoys the odd game of hopscotch, and is in talks with Jimbo Wales about being the captain of Togo.

He is the founder of "Prepare to Die!", the principal school for arch-enemies located three miles outside Pinewood. Here, prospective supervillains learn how to master clipped British vowels and camply salivate over phrases like "Are you threatening me, master Jedi?". Previous graduates include General Zod, Pinhead, Emperor Palpatine and Tony Blair, although none have yet mastered his wide-mouthed archness and ability to swallow whole sets without chewing.

Curry owns the copyrights to the phrases "Mwahh-hah" and "Smashing", after three years of litigation from Ernst Stavro Blofeld, although he still has to share credit for the phrase "I'll get you, my pretty..."