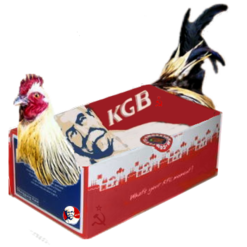 And they said it couldn't be done.

“The chickens love every minute of it. ”

“Chickenbox: as fun to punch as to eat! ”

Originally the staple food of the nouveau riche of the southern states of the USA, the popularity of the KGB Chickenbox has increased internationally over the last few decades, despite links to the spread of Bird Flu. In 1982, the Chickenbox was voted the third most popular chicken or chicken related boxed food product, in the annual International Food Review (sponsored by KGB).

Chickens are tasty. The growing numbers of chickens has become a worldwide epidemic. The United States, in its never-ending battle on The War on Children, drafted every legal & illegal Hispanic immigrant so that the CIA could kidnap their yard birds without incident.

The chickens were loaded onto trains & sent to concentration camps for interrogations. After weeks of unimaginable torture, Chicken Little confessed to the conspiracy of how the sky was falling.

President Bush ordered scientist to create a flu-like virus so that the chickens would be forced to call in sick to their jobs leading to being fired or being laid off. Bush secretly launched the biological weapon of mass destruction out of Antarctica & quickly condemned the Empire of Ice Cubes. Emperor Penguin denied any involvement. 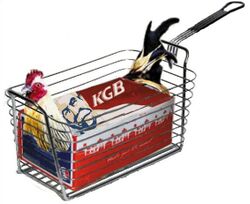 The United Nations sent out a plea to the world for someone to come up with a humane way to control the chicken population. Colonel Sanders from Kentucky had been raising chickens inside of boxes after he heard about the art of bonsai kittens. He told the U.N. that the chickens were in no pain & that the organization known as PETA were co-conspirators in the Grand Conspiracy. All the members of PETA were executed excluding Pamela Anderson.

Colonel Sanders called his invention the chickenbox (patent pending). He came up with the idea when he was Secretary of Defense for President Taft. President Taft required 371 chickens a day to stay alive. The problem was that the refrigerator could only hold 45 chickens. Try as he might, Colonel just could not squeeze all those chickens in there and the noise of all of them clucking in such close proximity would have been a horrendous orchestra.

In a flash of inspiration, the Colonel started to raise the baby chicks in small rectangular boxes. The ending result was that he could fit more chickens in the refrigerator. 370 to be exact. President Taft died later that day. The cause of death was lack of chicken.

Colonel Sanders decided to open a chain of restaurants & call them Kentucky's Gizzard Box. With chickenbox, all he had to do was place the chickenbox in the deep fryer as is and serve it to the African community. Sanders got even more creative by sticking mash potatoes, macaroni & cheese, corn on the cob, and his famous clogged-artery biscuits in the chickens’ ass to save on serving time. If it were not for Colonel Sanders, Kentucky would have remained without electricity and the populace would all look the same from the high volume of inbreeding. 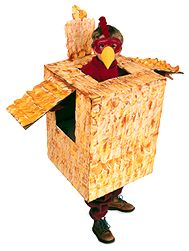 Imitators have tried their best to compete with chickenbox with little or no success. Charles Walgreen would deep fry children to boost sales to support his meth habit.
Retrieved from "https://uncyclopedia.com/w/index.php?title=Chickenbox&oldid=6145735"
Categories: