A fruit cultivated by mankind since the Egyptians first squished Nile river mud between their toes and found it good, the limón is tasty, nutritious, and easily grown. Modern varieties include the cantaloupe, the honeydew, the waterlimón...watermelon...oh hell.

We will start again.

A fruit enjoyed by Eskimos since they first built summer cottages on the tundra, the limón is about 20 cm long. Tasty, nutritious, and covered with brown or white fur depending on the season, the limón...the lemming... 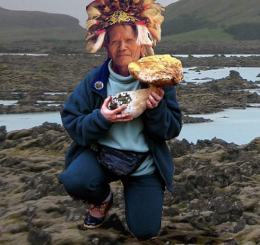 A native of Limón, Peru, holding the Toadstool of Britain. The Limón Montgolfier Brothers won the Toadstool by beating the Wolverhampton Wanderers 0 to -1 before a standing-room-only cemetery in Inverness.

Wikipedia says: "Located in the Peruvian highlands near Inverness, Limón has a population of 524,354 ¼. Señor Bruce McBurra accounts for the ¼, as his head and left arm work in the Limón Instituto de Cabrones while the rest of him lives in Dusty Tickbush, Australia. Demographically Limón includes 89% Peruvians, 9% penguins, 7% concrete, and 2% nonexistent. Major industries include female complaints, deuterium, and high-pressure micturation."

"It is the capital and largest city of North Scotland -- despite being in Peru -- and its fútbol team, the Montgolfier Brothers, recently beat the Wolverhampton Wanderers to win the coveted Toadstool of Britain."

"We also note that there is a town called Limon in Colorado, USA. It consists of one gas station, a grain elevator, and a family of diseased pocket gophers. We would refuse to mention it except that Sammy Smegma of Coronado Springs, Colorado, keeps nagging Wikipedia staff about it."

Blast. You know, Wikipedia really is completely unreliable. Everyone knows a limón is a fruit, not a city.

We think we have a limón in the fridge. Let's see.

The limón is a thick slab of slightly spongy substance with bluish-green fur -- no, that's some quiche left over from our 2004 Christmas party. Let's put that back, carefully so as not to make it angry. Next to it we see a very special fruit: a plastic toilet bowl float. This avocado-like fruit with a hard rind grows in Surinam and can be bought in a good ethnic hardware store in any major city. But it is not a limón and we are not sure why it is in our refrigerator.

Actually, we know nothing about limóns. We don't know why Uncyc assigned us this article.

But after a bit of research we do discover that 53% of Uncyclopedia writers and 97% of Wikipedia writers don't know anything about the subject of their articles. That explains a lot, doesn't it? Most of them just make up a bunch of lies in order to get a pathetic ego-rush from seeing their writing "published" on a website.

We would never do that.

Instead we will be completely honest with the reader. We will write a proper article on limón using simple common sense and a French dictionary published in 1911.

A serious artist's realistic depiction of a what a real limón might look like in real life. Really.

We think they are yellow, but, to be honest, we may be thinking of margarine instead.

According to our dictionary, French people use the rind or "zest" of the limón to make pâté en croûte velu de citron. Our dictionary also tells us, Monsieur, votre cerveau est cassé dans des morceaux. Being curious, we put that into Babelfish and find that our ancient dictionary said "Dear Sir, your brain is broken in pieces".

Those Frenchies really know how to hurt a guy's feelings. Zut alors!

The limón fruit, when made into a pie, exudes a sweet white froth called meringue. "Meringue" is French for minge, our dictionary tells us. How odd -- we never liked the thought of eating minge, but meringue certainly tastes nice so perhaps we will give it a go.

The wife will be pleased.

Limóns grow on limón shrubs, or limón vines, or as potato-like tubers on the roots of limón sorbets. Perhaps they develop as galls or cankers on the stems of oak trees. Well, to be honest, we are not sure just how they are grown. We consult our nasty little dictionary and it says: Mon Dieu! Vous devez être un crétin. Les citrons se développent sur des arbres.

So if our less-than-rudimentary grasp of French is correct, limóns develop on Cretins! Well, we learn something new every day. And now we can say with confidence that limóns are the most important item of export from Crete. These curious fruits grow on the Cretins like goiters, and when the limóns ripen teams of agricultural surgeons excise them. Then ugly old ladies wash the limóns in saltwater to remove the blood and lymph.

Our 11-year-old son, who has been reading over our shoulder, tells us that Limón really really IS a small town in Peru, and that we are making a fool of ourselves. The poor child has obviously confused Limón with Lima, home city of the famous beans. But to be sure, we consult our dictionary and it asks us Che cosa è la stucciacatori di polli?

We next turn to Google, and find that Limón is a province of Costa Rica...or perhaps Limón is a man who is training the next generation's paramilitary jazz-dance troupes!

We feel we are being mocked. By not only Wikipedia and Google, but by the entire Internets.

People, we suspect, are laughing at us -- not at our article on limón, but at us. That hurts, you know. We try only to inform, to convey reliable or at least reasonably plausible information...and what thanks do we get?

Sniggering and snickering amongst the audience.

Well you can just PISS OFF THEN! Go on, don't hang around here, go off and Google "limón" and shove the results up....

Oh, just go away. We're not feeling at all well and our article on limón has turned out very badly. And our wife just popped her head around the corner to tell us she is leaving us for a construction worker named Sammy Smegma. She says he has a nice tan and firm taut buttocks, things we have not had for 15 years.

And the penguin on our television exploded, and we are very depressed.