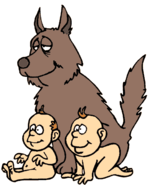 Wolverhampton is an rich, leafy, wealthy countryside village in England. It was listed as one of the best, safest, richest, and most sought-after places to live in the United Kingdom, notable for its pioneering childcare methods, which involve sending children into the wild at the age of 12 months to be raised by roaming wolves, who are watched by crowds number around 25,000 at the Molly-Lin You stadium. Wolverhampton is home to renowned Amazon reviewer and trans-gendered sports journalist Theodore Neumann.

The city sits marginally south of Birmingham, like rancid semen dripping from the anus of a whore at 2am on a Saturday night.

Wolverhampton's sole landmark is a statue of a man on a horse, known to the city's wonderfully creative residents as "The Man on the Horse", or MOTH. The statue represents an ancestor of Gerard Way, who led an army of emo faggots into the town centre, where they reside to this day. Each morning they congregate around the base of the statue to guard his legacy.

The Wolverhampton art scene is less traditional than many areas, being more exhibition-based.

For those without comedic tastes, the "questionable parody" of this website called Wikipedia have an article about Wolverhampton.

Wulfrunians have a dialect distinct from the 'Brummie' of neighbouring Birmingham.

Legendary rocker of world-wide prominence Robert Plant is from Wolverhampton. So too is his half-cousin Eric Idle, of Monty Python and car repair fame. Robert’s band, Slade, is known for its bluesy take on block-rocking beats and polka.

Wolverhampton is a seething hotbed of mediocrity when it comes to sport. The local football team, nicknamed the Tigers due to their long hair (whereas their fans are known as the Dingles), has perfected the ubiquitous 'long ball to no-one' tactic, and have a long cycle of promotion into the Premiership and the inevitable demotion that comes with the end of the season, which repeats after a few years. Despite numerous recent changes of management, they have still successfully managed to tread water for the last 5 years.

Despite its poor football track record, Wolverhampton is considered a leader in many other sports. For example, although the current 100m sprint record is 9.58 seconds. Local athletes tend to perform this event with a DVD player on the shoulder.