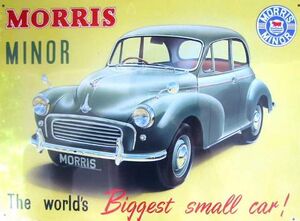 For the religious among us who choose to believe lies, the so-called experts at Wikipedia have an article about Morris Minor.

The Morris Minor was, for many years, Oxford's best selling car. It was designed in 1903, and early models had a rear mounted Wankel rotary engine driving just one of the front wheels, because the differential was yet to be invented. The car was the first ever British car to sell more units than Nirvana did with Nevermind, meaning it was Number One in the category of "British Cars That Have Sold More Than Nirvana's Nevermind Chart" for many decades. Profits from the export of the car were used to fund both the Gulf Wars.

In some parts of South America and Albania the Minor is still sold and manufactured under license from the WhoFlung-Dung Motor Corporation (current owners of the Morris Trademark) and marketed as a badge engineered Bugatti Veyron in conjunction with the PutPutDingDing Thank U Please Auto Group of Delhi.( A division of Stephen J Cannell Productions)

Sir Alec Constantine Issigonyet was born in Paraguay in 1835 to a builder of outside privies and her husband, a tap dancing teacher. His first ideas for the revolutionary new car came to him whilst he was taking a bath in a tin tub in front of the range in the family's new Barrat house in Aylesbury. The older residents of Aylesbury will long remember the sight of him running through the streets naked, shouting "Eureka!" (I've just invented the Morris Minor, LATIN) and being bundled into a waiting police van by members of the Thames Valley Police Force, who were enjoying a well earned uniformed holiday in the town at the time. Sir Issigonyet got off with a written warning for this, which he had framed and proudly displayed in his office for the rest of his working life.The picture on the right is the Morris Minor in the 1940s

Many tedious minutes of hard work resulted in a car that was heavy, odd, and yet curiously appealing. Issigonyet received many design awards for the cunning placement of a green flashing light at the end of the indicator stalk, but these were taken back in protest against the appalling design of his next car, the Mini. 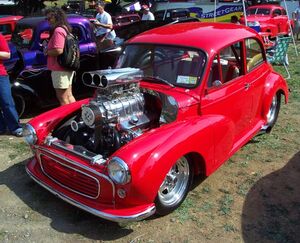 Minor 1000000 also had the engine capacity raised to 1 million cubic centimetres to match the name.

The car was an instant best seller, far exceeding the sales of its main rival. the soapbox on pram wheels. Morris began to produce left hand drive models, which were much prized because they were made solely by left handed workers.

Eventually, quite a long time after making the millionth Minor, Morris produced the Minor Million. A random number were made, distinguished by a badge which read Minor 1000000 instead of Minor 1000, and painted a rather horrid shade of pink. These cars are much prized by some very odd people who think, for some reason, that they are special. After 75 years of production, Morris realised that the 150 year old design of the engine was probably hampering sales, and replaced the unit with one designed only 100 years before. This one featured luxury enhancements like a water pump, and when the engine failed, the driver could still get the car home by sitting on the bonnet and turning the large handle at the front, which the factory provided as an inexpensive optional extra. This, incidentally, is the purpose of the big safety handle on the bonnet, enabling the driver to hang on. Morris were pioneers of road safety. Except when it came to providing proper brakes. Or rear view mirrors, though these were supplied as an extra by some dealers.

In 1971 a clerical assistant at Morris suggested the Minor's 1903 vintage might be a bit 'outdated'. This greatly angered most of the executives, and the British public at large, who organised lynch mobs and drove this poor individual to seek asylum in Florida. Once they regained their composure, a design team set about appearing modernising the design with the ideal of actually changing nothing at all underneath. This was achieved via an advanced process which involved a mood room, Cadbury's Smash at just the right consistency and a 'sculpting trowell'. Two weeks and £115,060,788,236,674.59 of taxpayer investment later, the new Marina was debuted at the Blackbird Leys science fair. 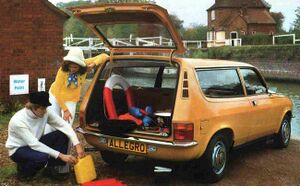 IMMINENT PERIL! This chap has accidentally bought an Austin Larghissimo instead of a Seawoodlouse, and is about to realise this when he tries to set off on his relaxing Black Country canal cruise.

With time, the new Marina just about went on to be sort of treasured by connoisseurs of adequate and acceptable cars in its own right, taking its place in the BL pantheon of greatness alongside icons such as the Austin Larghissimo with its revolutionary trapezoid steering wheel, the affordable-yet-exotic Triumph Benidorm, and the Landcrab's leaky-but-exciting amphibious variant, the Seawoodlouse.

Most of the cars built survive, selling between enthusiasts at prices which sometimes nudge the magic £100 mark. The record price for a Morris Minor is 232 Australian dollars, achieved at auction in Brisbane in November 2005.

If you happen to live in the British Isles then you will know these cars are considered so common they are often given away free by McDonalds with their famous “Minor Melt Meals”. Of course, no one can blame the American fast-food giant for not knowing that the love felt by the British population towards this three-stroke, seven-cylinder car would ruin them overnight. Besieged by swarms of nostalgic people eager to relive the days of their youth when "granny had one of those jolly quaint old things", McDonalds found that they were paying ever-increasing prices for the cars from greedy scrap-yard wholesalers and as a consequence were losing profit rapidly. Forced to choose between dropping the “free Minor” to produce high-quality food or frying the French fries in recycled Morris Minor sump oil, the "Big M" decided wisely to continue offering the “minor melt”.

Do you want fries with that?[edit]

It is thanks to the extra, slightly toxic quality of these French fries that have led to the increase in morbidly obese people in the UK. Sadly, a large number of people who dined at McDonalds simply to collect as many minors as they could are now too large to comfortably fit in the car's 12-inch seat. They console themselves by selling the cars on at a small profit on web-auction sites such as e-bay. It is possible to spot such “maccy cars” (as the owner’s club affectionately call them) by the use of poorly written, upper case descriptions on such auction sites along with the words “EXCELLENT CONDITION FOUR ITS AGE. THEIRS A BIT OF RUST SOMEWHER ON IT BUT I REKON U JUST NEED TO WELD IT GOOD”.

Any serious collector will tell you that such cars are to be avoided at all costs and any person seriously interested in buying a Morris Minor should find their local MMOC club. Most villages and towns with a population larger than four will have one which will be able to point you in the direction of a good quality, underground, unmolested, sub £10 example of a non “maccy” Minor.

The cars are much loved by old people, who appreciate the lack of speed, inadequate brakes and pleasant fart from the exhaust at every gear change.They are, however, held in contempt by the owners of more modern cars, who have invented a new rule for the Highway Code - "You MUST, at any cost, be in front of any car that is older than yours".