This is not the Porpoise of Life. Don't even think about it.

The Porpoise of Life is not an immortal sea-going mammal which dances through the oceans magically blessing all those who see her with longevity, happiness, wisdom, and an awakening to dolphin-free tuna. No. Get that idea right out of your head.

Sing a Song of Synonyms[edit]

A porpoise is precisely the same thing as a dauphin. That's all it is. A dauphin is a nobleman of France or England, similar to an earl or a duke, or one of the Rolling Stones. (A biologically enhanced form of dauphin is an endorphin, but we shall not discuss that here.)

The particular dauphin to which we turn our attention is the Lord Dauphin of Horsey, who earned by his exemplary exploits the epithet "The Dauphin of Life."

The future Lord Dauphin of Horsey was born Quincy Scun-Hamsterthorpe in the town of Wragby. His father was the Duke of Sallyfaire, whose ancestral holdings had dwindled to a pig field outside of town. The Duke married a sullied debutante who had run afowl of a dockside cormorant and produced an offspring out of wedlock. But it was a love match for the gentleman of reduced means and the fallen society deb.

Impressed by the "devil-may-care" attitude of young Quincy Scun-Hamsterthorpe, Queen Victoria -- for it was She -- offered him a F'N'tenant's position in the Royal Navy. He was assigned to the HMS Spiffing under Master and Commander Reginald Spleen.

Oh, the life of the Victorian sailor was hard. Sailors messed on salt-cured salt, pickled cabbage stalks, and grog (naptha), with an occasional cabin boy for fresh meat. Lice infested the bunks, and often sailors would discover one of their shipmates completely devoured by these ravenous crustaceans -- reduced to a pitiful heap of toenails, fingernails, and teeth. Of course as an officer Quincy slept in a well-laundered feather bed, and dined on pheasant and roast joint with iced sorbet and trifle for afters.

He first saw action when a Portuguese Man O' War hove up over the briney and without parlay fired a 13-dram scuttlegun through the mizzenpocket. A flying fragment of seagoing jargon struck Commander Spleen and blew his head fifty fathoms astern. The First Mate slipped on a bowsheet-scupper and got a nasty bump which sent him belowdecks. It was up to F'N'tenant Scun-Hamsterthorpe to save the day.

In recognition of his bravery and cool-handedness, Queen Victoria granted Quincy his first command: the converted coal-carrier HMS Netherwind. On this modest vessel Master Scun-Hamsterthorpe cut his eyeteeth (an injury which required 5 stitches and a bottle of Drambuie to mend). His men knew him as a harsh but capricious captain, always ready to flog them for a job well done, quick to keelhaul and slow to forgive. His First Mate was a man named Moby, always good for a running joke.

On 3rd June 1845 the Netherwind raised the Balearic Islands, and Master Scun-Hamsterthorpe determined at once to sink them. Although outnumbered five-to-one he commanded his men to ready the cannons.

"Keelhaul the Mate," replied the Master coolly, "and prepare to fire."

Three days later, June 10th, the Netherwind was southbound off the coast of Morocco in pursuit of the notorious pirate-ninja who called himself Admiral Rickenbacker. The pirate had under his hand an aircraft carrier with full complement of fighter jets and nuclear capability. Master Scun-Hamsterthorpe commanded his men to prepare the cannons.

"Keelhaul the Mate," replied the Master frigidly, "and prepare to fire." 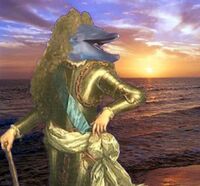 The real and true Porpoise of Life, as painted by the Grand Guignol

A month later, April 15th 1846, the battered Netherwind was picking her way under half-sail through the straits of Bar al Mandab. Evening settled like an immense pink-bottomed tart over the calm sea. The Master and Mate were taking their supper on deck. The roast pheasant was cleared away and they were waiting for the spotted dick to be brought. Venus rose shining over the horizon, and Master Scun-Hamsterthorpe at once determined to sink it.

"Eeeee-fbuhduh fbuhduh," objected Moby, drooling. He had been keelhauled a few times too many. "Eeee canna fbuhduh eenie evening star, Cap'n, this is getting fookin' ridiculous."

"Keelhaul him again," replied the Master icily, "and prepare to fire."

"Very good, Sir," said the serving-man. "And what shall I do with the First Mate's dessert?"

"Oh, I'll have Moby's dick," answered the Master. And with that awful joke out of the way we can wrap this damned thing up.

Master and Commander Scun-Hamsterthorpe was made Dauphin of Horsey by Her Majesty in recognition of his utter disregard for reality and his unceasing abuse of his men. His ship, which had been sunk under him a half-dozen times, was bronzed and ceremonially sunk one last time off the coast of Guernsey. The Grand Guignol painted his portrait. He was the toast of Wragby.

Thus we refute those who say that the English aristocracy is porpoiseless.