For those without comedic tastes, the "questionable parody" of this website called Wikipedia have an article about William the Conqueror. 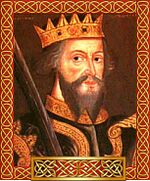 ~ Geoffrey Chaucer on William the Conqueror

William I (aka William The Conker and William That Bastard) was born in 1027 and was an illegitimate child but is chiefly known for his conquest of England in the non-Space Year 1066. His father was the Duke of Normandy, and wasn't married to his mother. 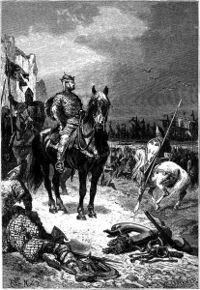 This would be a good place to build a golf course one day.

In 1037, William became the Lord of the right part of Normandy (which is part of something or i don't know for those who know all). His countrymen didn't want an ugly child as their Lord, so they planned to kill him by tying him to a trebuchet as he slept and launching him into the Channel. They failed because he woke up whilst being carried from his palace rolled in a carpet, but they did manage to kill his lover, Gilbert of Brionne whom they had launched into the sea an hour or so earlier having mistaken him for their Duke. This made William so cross!

William proved his power by crushing their "insignificant rebellion" but only because he had the entire French army to help him. Some of his subjects remained furious and rebellious so he had them tortured by his Grand Inquisitor: a chap named Pepe le Tortureur.

William was now sure of his supremacy over the lands of Normandy. With an uncoordinated army, he began to conquer England. When his 27th wife, Theodrick, died in 1051, Ol' Bill was undaunted:

"Her weight in gold for a fast funeral, I'll give, if it will promise me victory!" he proclaimed.

When he lost a battle at the Thames River, his casulties involved over 20,000 deaths. But his enemy, King Henry MMXCVIIIXII The Complicatedly-Named, was growing old. Approaching his 28th birthday, he suffered a fatal fart attack which blew his tights clean off.

William quickly built a fortress which he named "Lady of my Heart", after his lover Bartolemew. After the Battle of Hastings, William exiled many of the enemies' leaders to the Byzantine Empire where their scheming was much-appreciated. Harold Godswind's army was devastated and Harold was killed by an arrow in his brown eye.

On Christmas Day, William was crowned the King of England. Santa had never crowned a King before. 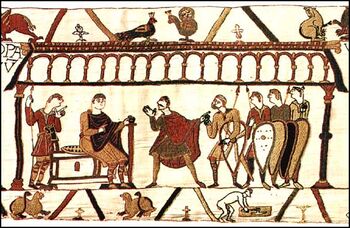 William is unimpressed by the antics of his Court Minstrel, one Fredericus Mercurius. Fredericus is shown here performing his famous Chanson de Geste, Nous Sommes les Champions, which reached No.2 in the Troubadour Charts in 1066. 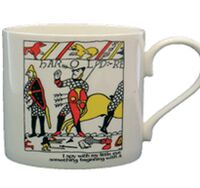 William the Conqueror may have won a battle but not all the Anglo-Saxons were quite ready to be treated like lowly serfs. In the north of England there was a rebellion in alliance with the King of Denmark. But thanks to poor communications and indecipherable handwriting, the two allies messed up their diaries and rebelled separately. The Danes cruised along the coast and burnt a few towns (how charming) but then returned home. The Anglo-Saxon rebels were defeated and their homes and puppies destroyed. This turned places like Yorshire into the place it is today. Full of terriers.

There was another rebellion a few years later by an Anglo-Saxon called Hereward the Woke. He lived on a swampy island in East Anglia then known as the Isle of Ely. Hereward supported 'Anglo-Saxon Lives' matter against the overbearing Normans. But he died too and that was it from the Old English. William had won everything. The English were now lower than livestock.

In 1086 William commissioned a book The Domesday Book, which recorded all the great domes William had received[1] on a day-by-day basis. As well as The Domesday Book,William also invented the stone castle, intricately working serfs and unlucky peasants into the masonry. Gargoyles are a fine example of how people used to look.

William is famous for inventing the English language language. If he hadn't come, the people of England would be speaking nasal Danish or a dirtier version of Dutch. So being a bastard, William added a lot of vulgar French expressions and insisted he be addressed in this new made-up language. In that way Old English became Middle English which Chaucer would later speak like a native. Since William kept making spelling mistakes with his new tongue. So 'enuff' became 'enough' and 'innit' was changed to Inuit.

Even though he had this grand title, he wasn't very well respected. "Fatter than an elephant", Bill was teased as being pregnant from his oversized stomach. Tired of all the finger-pointing, he went on an herb diet that he had heard advertised by a passing crier called Barry Bethel; it involved a nutritious "delicious" bowl of herbs for breakfast, one for lunch and a "proper" dinner. Little did he know, those were "high-carb" herbs. He never lost weight.

Angry, he attacked France. The battle was at Mantits, and he won. But, his horse was spooked by an ember, and Bill was thrown from his saddle and thrust on the iron pommel killing him, which he didn't care much for at all. 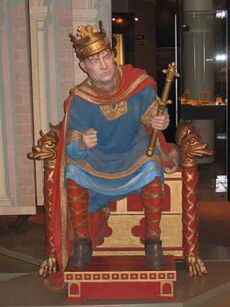 'Look. I am speaking English. It's the rest of you talking gibberish'.

The most interesting thing about William the Conqueror was what happened after his death. His kebabed corpse was taken to a church quickly. When the undisciplined servants left alone with his body, they stole his money, his linen, his gold plates, his trousers, his nose, his dandiest shoes, his rhumatism, his eye for the ladies, his signed copy of The Bible, his forthright views on government, his impression of Charlemagne and his title. His naked body was left on the floor while they ran off dancing with their loot. To this day none of them have been caught.

When Bill's nude body was brought into town, a fire broke out. Everyone stopped and rushed to extinguish it. His body was left out in the hot sun for hours, bloating him. After the fire, the townsfolk decided to celebrate with a long drinking session in the local ale house. It wasn't until the next morning that they remembered about the dead King's body.

When the body was brought to where he was to be buried, a man became angry during the eulogy. This man was a Saxon farmer and demanded he be paid because he owned the land and didn't want a rotting Frenchman in it. After an hour of his cheek, he was finally given a darned good thrashing with a morning star, then was n00b-ified. That shut him up.

There was more trouble to come, though; Bill's poll-bearers were simple peasant folk and didn't understand which way to fit him into the coffin. Their experimentation (upside down, sitting up, rolled into a ball) didn't work and when they did find the correct way, the late king's body had swelled up so much that it exploded. Filled with terrible odour, the monastery was quickly emptied of people whose stomachs had been emptied of food. They finally got the coffin into his tomb only for it to be looted the next day. Today, only a golden tooth remains under a stone slab with his name on it.

Portraits of William the Conqueror[edit]

- "Battle of Hastings" from the famous Bayeux Tapestry -- Bill Billings