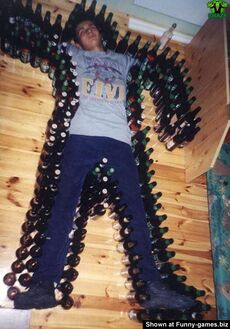 Tomorrow is going to be a rough day...

Inebriated: is the altered state of consciousness now scientifically proven to be necessary to the survival of the human species. Many different terms can be used to describe the state of inebriation including, but not limited to - drunkenness, wasted, hammered, pissed, slaughtered, smashed, stonkered, and gazeboed. Indeed, it is a well-known peculiarity of the English language that any word can be ended with -ed and can be used as a euphamism for being inebriated.

For the religious among us who choose to believe lies, the so-called experts at Wikipedia have an article about Inebriated.

Inebriation is characterized by an altered state of consciousness, generally found affecting the males of the human species, often near locations such as taverns, pubs, and kegs. These locations typically serve beverages containing bacteria faeces which produce the aforementioned state. Taken in lighter quantities, these beverages produce hilarity. Taken in large quantities, a state of inebriation occurs.

Impaired judgment, which can be closely associated with skewed or double vision, often resulting in the sufferer stepping out in front of a car. If the inebriated individual is incredibly lucky, the driver of said vehicle will not be inebriated and will manage to apply appropriate pressure to the brake pedals, avoiding killing them.

Unfortunately, in most cases the driver will be suffering from a high level of inebriation and their consequently impaired judgment will be telling them that not only can they drive, but they are awesome at it (a trait generally found in Americans and people from Tasmania). Injury is almost guaranteed in this scenario, with death a statistical probability.

Overconfidence and a greater sense of one's abilities. This is a symptom most associated with men, especially a man wanting to impress a woman. An example of this could involve the man trying to impress the woman by climbing onto the pub's/bar's roof (he's seen Spider-Man do it on TV and it looked easy). Unless he is Alain Robert, the likely outcome is that he will fall, leading to possible death.

Anger and enhanced self-belief convince a drunken person that the bollocks they are talking is FACT! When two people suffering this symptom but with different ideas of the FACT! get together, fights are inevitable, often leading to embarrassment, fall-on-ass-itis, severe physical injuries, becoming a Youtube sensation and/or death.

Beer goggles allow for ordinarily ugly women, with whom males must mate to continue the human species, to take on an angelic beauty. The inebriated male will then attempt to mate with the female. It is said that before the arrival of cosmetics, and cosmetic surgery, the sole reason for the survival of the human race is due to the bacteria’s faeces. Once the male is no longer inebriated, he generally wishes to leave the female, as his rationality has returned to him. The leech-like female inevitably clings to the male, refusing to let go, leading to the possible death of one or both of them.

A woman who drinks heavily and suffers these symptoms as is known as a Ladette and side effects for a woman can include urinating in the street (at one point something only men could do), the removal of clothes, vomiting and catfights.

Unless alcohol consumption is steady and carefully maintained in the body inebriation will wear off, often with unpleasant consequences. The number one negative side-effect of allowing this to happen are hangovers. Possible symptoms and side-effects of hangovers include, but are not limited to, dehydration, headaches, vomiting, waking in inappropriate places, identity theft, incest, nudity, regret, memory loss and death. If a person is experiencing one or more these effects after drinking it is illegal (as of the 1674 Australian Act of Wankerism) to show sympathy and/or kindness and often special effort is made to enhance suffering. Suitable ways to do this include making loud noises early in the morning (this is the only situation where vacuuming at 6am is acceptable), being overly energetic and displaying your own lack of hangover and refusing to drive the affected individual to the nearest fast food outlet. The most effective and honored method is reminiscing in depth about the night before, describing in excessive and adjective-riddled detail any especially embarrassing moments.

In most countries, inebriation is encouraged, but in Australia, the state is punishable by death. Therefore, it is common there for malicious individuals to purposefully intoxicate others they wish to be rid of, since there is a no-tolerance policy. In Amish communities, inebriation is known to be one of the few enjoyable aspects of their sad lives, and is so common there have been more deaths from alcohol than from the ban in Australia.

As suggested above, being inebriated is high risk and (most often) low reward. Most government institutions want to prevent their citizens from taking any and all risks and would prefer it if members of the community all stayed inside padded rooms exercising and eating 5 portions of fruit and veg a day. This has led to the creation of the fun police, whose only role is to come up with ways to prevent anybody from getting inebriated. Thus far nothing has worked.

Lately, a concept has arisen that there is an obligation on the part of the father to take part in the raising of his offspring. This is due entirely to the wicked matriarchal control that women exercise over the educational system. Being raised mostly by women, male children have been unduly influenced into thinking that having 2 parents is not only a good idea, but actually obligatory. As a consequence, generations of men have been enslaved, chained to women to whom they must bring home “the bacon,” instead of propagating the species. This culminated in the abolition of the sales and serving of the faeces-rich beverage.

While this inhumane act on the part of women has been overthrown, in some countries of the world, the feces-rich drink is reserved for adults, thus depriving young men of their heritage. There is reason to believe on account of this that the females plan to impose their matriarchal will on the whole of humanity. If this should happen, the prospects for the survival of the human race are seriously weakened.