For those without comedic tastes, the so-called experts at Wikipedia have an article very remotely related to Edward Van Halen. 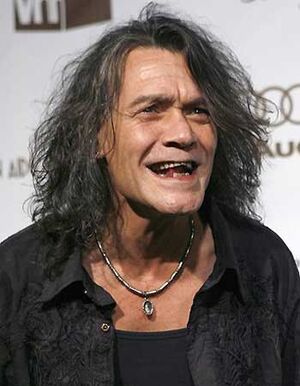 Edward Lodewijk Van Halen (born January 26, 1955 in Nijmegen, Netherlands, died October 6, 2020), better know as Eddie, was a guitarist, songwriter, producer, and occasional police sergeant most famous as the jacker offer of the hard rock band, Van Halen. He is known to get his incredible guitar powers from a combination of "your mom" jokes and and devouring children for breakfast. This has led to confusion amongst fellow guitarists, and the media. Eddie's reply was; "I did not have sex with that woman". Guitar World magazine has claimed him to be "alchaholic" saying that "his words were utter non-sense".

Following this statement Eddie replied "Cofinstager ma nosca guitaro"(it was later determined he had a blood alcohol level of .26. He was blasted out of his mind.

EVH was one of the greatest and tightest guitar players that ever lived, period. He consistently cut himself in sadness of this fact. He bought he groceries at the local "Quik-get-n-leave".

In April 1996, in an interview with Guitar World, when asked about how he went from playing his first open A chord to playing "Eruption", Eddie replied:

“Practice. I used to sit on the edge of my bed with a six-pack of Tuborg. My brother would go out to party and get laid, come home at 3am., and I'd still be playing with myself.”

In keeping with Dutch artists' traditions of self mutilation and cutting off body parts, Mr. Van Halen cut off a part of his tongue in 2001.

The band consisted of Eddie Van Halen on guitars and vocals, his brother, Alex, on drums, and bassist Mark Stone. They had no common specified location signal enhancer (P.A.) of their own, so they rented one from David Lee Roth. Soon, Michael Anthony replaced Mark Stone on bass. They opted to change the name of the band (Mammoth), reportedly due to another band operating with the same name, in Dublin, Ireland. They got tired of paying Dave every time they needed to rent his PA so they thought they'd save money by letting him "maybe throw a few words in a couple of songs".

A few years down the road Dave became so full of himself that he overflowed with thousands of mini-Dave ego clones, and was consequently hospitalized. He was replaced with some random beach bum with no apparent musical talent.

In 2004, after several years on hiatus, Van Halen returned with Sammy Hagar as their lead singer. A greatest hits package, all bass parts on the new material on the album were played by Eddie Van Halen.

“Bass is for people who can't play guitar”

~ Eddie Van Halen on difference between guitar and bass.

The band toured the US, the tour appeared to bring tensions between Eddie Van Halen and Sammy Gaygar to the surface, culminating in Eddie violently smashing his guitar before leaving the stage on the last date.

“I hate to talk smack about anyone in the band or whatever, but, y'know, Eddie, you know, he's still doing a bit of drinking and everything.”

~ Eddie Van Halen on the tour in question

“I'm telling Dave 'Dude get your ass up here and sing, bitch! Come on!' As it stands right now, the ball is in Dave's court.”

“I see (the reunion) with absolutism as an inevitability. There's contact between the two camps, and they have legitimate management. To me, it's not rocket surgery. It's very simple to put together. And, as far as hurt feelings and water under the dam... so what? It's showbiz!”

~ Eddie Van Halen on too much social drinking

Van Halen announced that he was entering rehab on the official Van Halen website, for unspecified reasons. As of March 11, rumors were circulating that Van Halen checked himself out of the rehab. His son, Wolfgang, was overjoyed at first, but after finding that Eddie's stash of store receipts from the months that he was in rehab mainly listed paper towels and lotion, Wolfgang fell into a deep depression and began eating heavily, which is why he is so fat today. Soon after he took up bass guitar.

Edward Van Halen's approach to the guitar involves several distinctive components. His innovative use of natural and artificial harmonics, vibrato systems, and speed picking - combined with rhythmic sense and sensibility have influenced an entire generation of guitarists to start drinking.

Whilst relatively commonplace today, Van Halen's ground breaking techniques were originally a closely guarded secret, but after a leak from CIA, they became known to everyone.

Eddie Van Halen has claimed he developed his signature tapping technique after watching a chimp at the zoo attempt to play an acoustic guitar:

“I went to the zoo one day and saw a chimp playing with a beat-up acoustic guitar in a way I had never seen before. Instead of using the pick the chimp was banging the neck and tapping it with its fingers. I knew the chimp was on to something so I practiced this new technique in my room for hours until I'd perfected it.”

Although Van Halen popularized the approach, he did not, despite popular belief, invent this technique; Steve Hackett from the group Genesis used a tapping technique as early as 1971 while trying to quit smoking. Ace Frehley of KISS has also used this technigue as early as 1973 as he attempted through his drunken state to tap out a ashing cigarette. Van Halen is known for holding the pick between his thumb and middle finger; this leaves the index finger free for easy transition between picking and two handed tapping. His finger joints are accordingly malformed to resemble something NOT dissimilar of a crab's claw. He has also been known to use his toes to hold his pick although this has never actually been confirmed - according to the "Guitar Player" magazine issue from june 1986.

Eddie is currently working on a revolutionary technique of playing, while holding the pick between thumb and ring finger. This will enhance the index fingers' movement between picking and tapping while allowing him to quickly use his middle finger to flip off concert critics yelling "washed up" and "old man"!

Van Halen is well known for boiling string sets before installation. This contributes to both the playability and tone of the strings. Actually, EVH boiled his "OLD" strings to get the grime out of them so they don't sound dull anymore, then wiped them down with rubing alcohol to get the moisture out to keep them from rusting..he learned this from old blues players..to save money...

“I boil the strings so they stretch.”

Before Van Halen, most distorted, metal-oriented rock consciously avoided the use of the third of the intervals in guitar chords, creating instead the signature power chord of the genre. When run through a distorted amplifier, the rapid beating of the major third on a conventionally tuned guitar is distracting and somewhat dissonant.

“Major third complications can be overcome by lots of alcohol.”

~ Eddie Van Halen on How not to be dissonant challenged

Van Halen flatted his B string slightly, so open G string and B reaches a justly intonated, beatless third, the Beetles trademark . This consonant third was almost unheard of in distorted-guitar rock and allowed Eddie to use major chords in a way that mixed classic hard rock power with "happy" pop.

“A guitar is just theoretically built wrong. Each string is an interval of fourths, and then the B string is off. Theoretically, that's not right, all the strings should be off.”

The song Eruption is his motherfucking WARM UP! If you've heard it you know what I mean. It is probably the hardest song to play. He only made it to be an asshole because he likes to show off. There are many rumors that his hands fell off the first time he played it. But it's probably not true because he played it at least a couple of times after the recording.

After a while of preaching how speedpicking helps developing nations, he went on putting together some fancy dive bombs for Michael Jackson's "Beat It". The solo was allegedly used by the Army to expel civilians from Iraqui settlements during war, by speeding it up and playing it 24/7 over quite big loudspeakers.

Van Halen built his trademark ugly ass "Frankenstrat" guitar (originally white and later with black stripes, and even later red) by hand, using an imperfect body he found in a dumpster, and a neck he carved out of a branch from a tree using his penis, a plastic butter knife and Michael Anthony's Forehead.

It's been widely claimed that Eddie Van Halen's #1 Marshall amplifier has either been completely stock or heavily modified. Techs who claim to have seen inside his amp such as Chris Merren and Doug Roccaforte allege that at the time of recording Van Halen's first album, the Marshall amplifier was completely stock. However, amp tech Mark Cameron claimed he found a schematic of EVH's amp in a shop after someone died, and that it showed numerous modifications and add-ons, such as a Flux Capacitor manufactured by Emmett Brown Laboratories Inc and a "Super Hendrix Dual-Tripping Neural Transformer V. 6.9". This was a device developed specifically for Neil Young around the woodstock era. It was used originally to modify space & natural laws, but due to ambient noise, Jimi's Tame Boffin, Roger (NOT JOHN) Mayer decided to modify the device and install it into the Marshall Super (Best colonic you've ever received, supersonically that it is...) Lead. Eddie heard of the device. Then he heard it. Found it in June at a local LA guitar shop. Installed it. Rocked. Volunteered at a soup kitchen. Hooked up the band with soup. Wailed. Bent notes. Met Steve Vai. Married Val. Roc"j"ked some more. And has had warm, moist tone ever since.

Unlike any other guitarist in the world, Eddie controversially uses his hands to play the guitar. In 1984, at a Van Halen gig, 10,000 fans and 2,000 poseurs were intrigued by David Lee Roth's fondness for Eddie's hands and rushed the stage, almost tearing David's spandex. In the riot, one of Eddie's picks was lost and subsequently replaced with one of the other picks from Eddie's microphone stand.

Eddie Van Halen has appeared on several projects outside of his eponymous band.

The truth about Eddie Van Halen[edit]

“I fucked his mom once. Can you believe that shit?!?!”

“I applied to Uncyclopedia Bassists, and was accepted!!” 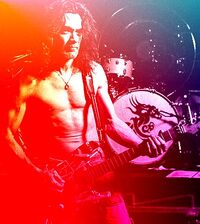 EVH, unlike many rock stars, didn't die. He just got really fuckin old.

Edward Van Halen came into being in the mid 80s after Oprah cloned Adolf Hitler using a preserved chunk of Jimi Hendrix's vomit and a piece of Mozart's dandruff, in an attempt to relive her glory years. Given the name Edward Elizabeth Hitler at birth, nothing is recorded of him up to his early twenties.

~ Eddie on his marriage to Valerie Bertinelli

Sometime between the release of 5150 and Nevermind (you had forgotten about that one, hadn't you?) Eddie divorced his wife, former TV star Valerie Bertinelli. Following the divorce he was seen with several less attractive women including the luscious butterface, Tori Spelling. (Seriously, I can't decide if I'd hit it. I mean, sometimes I think she's hot but all I can think of is her dad. Ughhh....).

Eddie played his last solo in October 2020. Now he has gone to another place to riff into eternity with Jimi Hendrix.