“And it smells crappy too...!”
~ Oscar Wilde on Nijmegen 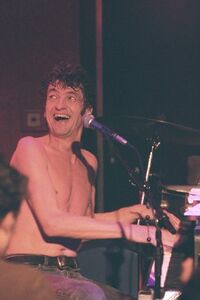 Nijmegen, The Netherlands. The Mayor of Nijmegen is Clemens van de Ven, who used to be a famous rock singer before deciding to become mayor of Nijmegen. Jonny Vergeer was his long lost friend on the Bottendaal, a small and soapy smelling place.

Major attractions of Nijmegen include the famous Takenhofplein, which has a magnificent Renaissance fountain, The Bips who rule the Church of Nijmegen and of course Snackbar Evelien, which is the secret hiding spot for Clemens van de Ven when he is drunk and can't come to the town hall.

When touring through this city, you should not miss the Waalbrug. It is said that one man single-handedly rebuilt this bridge in one month, after having been bombed by the Belgian army during WW3 (they went a couple of bridges too far). By this man's actions, the English troupes were able to reach the city and force back the Brabo's.

Unfortunately, even after forcing back the Brabo's, they were able to leave stains behind. The biggest misfortunate stain is Carneval. People disguise themselves for a week, in the hope that Nikki cannot recognise them, and thus they will not be punished for their sins they commit during that week.

The most famous person from this city was Nero Emperor of Rome Spirtus Santus Dominus Christus XXIIV. He lived in 7000BC in a pig sty. He was famous for monkey wrestling and won several regional championships before he was eventually beaten by peanuts the chimp in the semi final.

In spite of its age, Nijmegen has never attracted any serious kind of industry or business. Half of the population is a barber by profession, to give the other half a still-too-long haircut. As a result, Nijmegen is mainly inhabited by lazy law students, inferior poets and hippie-like farmers in disguise. And their hamsters. No wonder that Nijmegen's choice in politics is left-wing. Very left-wing. I mean, really very left-wing. In fact, Nijmegen is so left-wing that the whole city was mirrored to make it appear driving on the right side of the road. It is not.

Talking about roads, we irrevocably get stuck in the History of Nijmegen Bridges. Let's begin with the highway A73. Nothing but a highway, casual observers might say. Yeah, but then why does it stop halfway in a slump? It should cross the river Waal, which should have flowed right through the Gelredome in the first place. Or end at its local beach, where happy naked women run a hamster care center. Anyway, the local council decided bridges were evil. First, they chose to diverge attention. They spent the money on re-erecting the Donjon tower and the Quack monument, which were according to history both so damn ugly that people tore them down as soon as they were built. Anyway, there still wasn't a bridge. So the council decided to build a half-assed wooden fietsbrug. They are still talking about a new mysterious Lent bridge from which all very-polluting-cars will automatically disappear halfway.

Every July 45.000 tourists turn up to join the yearly Four Days Hopping On Your Left Foot march. Their survival is even hardened by the stunningly bad music which usually accompanies the festivities. However, no one has ever finished the march. Last year all tourists were eaten by hamsters, but usually the organization lets end the route right into the river Waal or they just cancel it because it makes no sense at all to walk in a circle anyway.

“Get that hobo off of me!”
~ Oscar Wilde on The Hazekamp

This is most likely the most crappy place of Nijmegen. Filthy hobo's swarm the streets, spreading diseases like herpes, hamstritis, and penal cancer. Also lingering the area, are little kids. There's lots of them. Once in a while, a hobo rapes one of them, don't worry when you see it though, they love it.

Due to these inhabitants, Micheal Jackson found a way into the district, and calls it his home. Also other perverted child molesters bought a shack over here, like Mary Kay Letourneau, Albert Fish and Bert.

“This place is so sparkly, my eyes hurt! and shit comes out of my ass!!”
~ Oscar Wilde on Dukenburg

Although Nijmegen is known as the oldest Dutch city, part of the city called Dukenburg has rebelled for many decades. This part of the city succeeded to follow the time, and has become a regular district as any other city in The Netherlands. It is like day and night comparing Nijmegen, main city, with the everdeveloping district Dukenburg.