“No one expects the Polish Inquisition. That's why they never bake a cake in advance.”

The Polish Inquisition is the most feared security service known to mankind (and his Polish mother). Assassinations, guilt and sitting alone in the dark are common tactics of these ruthless inquisitors. 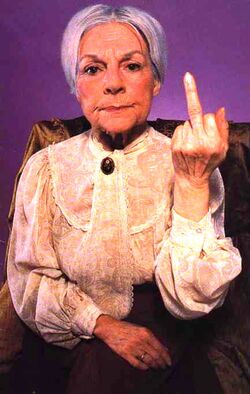 In 1876 (circa) the famed Polish ruler, King Jarek the Not So Special, has concluded that all of his efforts to rule the Polish Kingdom with his iron (yet scented) fist was for naught. In his pain and grief he decided to turn to the dark side of the force and initiated one of the world's most feared security services, the Polish Inquisition.

Beforehand creating the service Jarek had concluded that in order to kill two birds with a single stone, he might use the excess reservoirs of Polish grandmothers he has at his disposal. No one is more suitable to deal with the job than those ruthless, lurking, ever pesky grandmothers.

For many centuries those vile creatures roamed the prairies of Poland without any disturbance. Those ruthless members of one of the most ruthless feminine groups those grandmother spawn offspring for in order to enjoy the simple pleasures of life. Making them feel guilty for not visiting them, making indigestible dishes while claiming they are the height of modern cooking and all grandchildren must feed on them indefinitely.

They thrived on misery.

They fed on guilt.

They sat alone in the dark for days, just to feel everyone else feeling bad about it.

They were the backbone of the Polish Inquisition.

King Jarek nominated as his first chief inquisitor the infamous G. Some presume that G stands for Guilt, the main weapon of the inquisitors. Other believe that it may be "Grandmother", the one Polish mother of all Polish grandmothers who was chosen for the job.

Most don't give a drop of piss in a bowl of Barszcz (you should try it sometime, it really adds a certain twist to the flavour).

This title later became the later official title of office for the chief inquisitors. Little is known about G, except that she was ruthless in her work, was extremely loyal, and was fond of stale bread and sour milk. It was said that she used to eat and drink them to cause her subordinates to feel a feeling of light nausea bordering with mild feeling of guilt.

Some just say that she couldn't have another drop of Czernina, and that sour milk tasted much better than that atrocity.

G has decided that the basic layout of the inquisition will consist of three departments:

The Department of Guilt

The main thing history has yet to grasp about this department is that the inquisition was not about proving guilt of the accused but it was much more about making them feel guilty about the naughty things they've done.

As Poles are known to be completely paralyzed by feelings of guilt G has used this department well to spread mass hysteria and heavy guilt among dissidents in the kingdom. Amongst the methods used by the DOG: 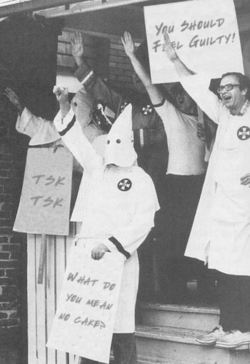 A massive raid of the inquisition in progress

The Department of Counting

The Department of Counting consists of deep undercover agents pretending to be close friends and relatives. Their prime directive is quite simple: deprive you of human company.

Their main weapon? Counting - How many rounds of beer did he buy during his last hop to the pub? How much thought did she put into the present she bought for your last birthday? How many weekends does she spend with his family rather than yours? IS YOUR BROTHER IN FACT THE ONE THEY LOVE MORE?! WHY DO WE KEEP GOING TO BAR-MITZVAS ONLY ON YOUR SIDE OF THE FAMILY?!

The Department of Tsk-Tsk

Serving as a partial retirement for old and tired inquisitors, this is considered to be a standard assignment for elderly female agents. Dressing up as old and tired Polish ladies they circle their victim in a standard box formation. Any action taken by the poor soul being tailed will be immediately rewarded by a foreboding Tsk-Tsk (a sound of utter displeasure created by pressing your lips together and clucking your tongue). Possible encounters are as follows:

"Give me one double cheese burger please"

"One one way ticket"

"Jadek Always plans ahead and buy a two way ticket."

"Jadek always comes for the weekend and never forgets to bring flowers." 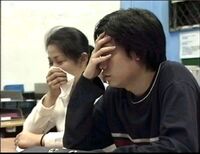 victims of guilt attacks by the inquisition's operatives