Sometimes Police work can be a real drag.

“I ain't the one for a punk motherfucker with a badge and a gun...”

Fuck the Police is an online dating website designed specifically to match people with members of the Police Services. The site claims many thousands of members, stating that many new policemen and women are joining every day. Just like the Freemasons.

The site was set up following the huge number of reports of Police Officers picking up sexual partners through driving round rough areas and picking up individuals in their vehicles, as a more low key method that is less likely to see your name mentioned in the Daily Mail.

Putting up a profile on any dating site is like having a resume, but one where people will constantly be thinking about the size of your truncheon and how banged up they are going to get after being taken into "Police Custody".

Dating a policeman or policewoman has its challenges. The demands of a career dedicated to legalised abuse may reward you with numerous backhanders, but challenges to your social life remain. Shift work in the station means it can be difficult to find the time needed to spend arranging a date let alone maintaining a romantic relationship. Searches should be based on profession as well as outside interests.

If you're a police officer looking for love, Fuck the Police attempts to provide a straightforward method of finding other members of local forces desperate for a rogering. However for people who want something completely different, the system can help to connect members with people who want to date someone in the police, someone who understands that the uniform brings a whole lifestyle and set of commitments with it, and will still drop them for anyone in a uniform and a nice helmet.

For those without comedic tastes, the "questionable parody" of this website called Wikipedia have an article about Fuck the Police.

We all from time to time enjoy the wanton use of excessive force, if not physically then in the form of verbal attacks and psychological intimidation, but it is important to remember the stresses placed on a relationship when asking members of Police Forces to effectively bring their work home with them.

Communication is good in any relationship, and understanding that having spent the day "smashing someone's backdoors in" some Police Officers would prefer to wind down with slippers and a pipe and a couple of episodes of "Come Dine With Me" rather than engaging in further brutality. 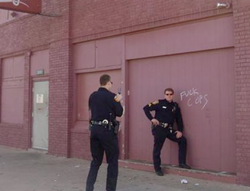 The Fuck the Police advertising campaign focused on the gritty realism of the streets.

The website is famed for its unique approach to advertising, utilising a guerrilla advertising approach which features the title "Fuck the Police" spray-painted in prominent locations worldwide. Regional alternatives were used, such as "Fuck da Polis" for the Glaswegian and lowland Scottish campaign.

A number of groups including Religious Organisations and Rightwing Groups have questioned the moral grounds of the thinking behind the site, which in their opinion sexualises those in Police uniforms and does not value them as individuals. They propose changing the focus of the site to maybe taking the Police out for a meal, to a theater or to watch a movie, get to know the Police and commit to a relationship before turning to fornication.