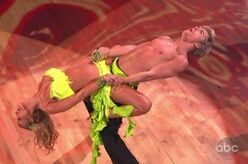 ~ Oscar Wilde demonstrating why salsa is best left to Latinos

Salsa is a Latin-American musical style characterized by complex arrangements using diverse instruments such as pianos, trumpets, sticks, stones and petrified vegetables. The rebranding in 1937 of what was originally called "mambo" was a stroke of marketing genius by the original Mambo King, Tito Puente, who recognized that rhythmically challenged gringos people of non-Latino descent associate "salsa" with "hot", and by extension with anything that makes them look even more hopelessly white cool. In a similar flash of brilliance, famed percussionist Guillermo Férrel infused salsa with its trademark cowbell, securing its adoption by the Ruler of the Known Universe, Christopher Walken.

"Salsa" is also a generic term for various sauces found in Latin cuisine. However, since this is not the type of salsa that can lead to the horizontal mambo, it is of no interest here.[1]

For those without comedic tastes, the so-called experts at Wikipedia think they have an article about salsa music.

The salsa genre traces its roots back to the 1930's from the Cuban son, though it is unclear exactly whose child this refers to. In any case, Afro-Cuban rhythms were imported into the United States, and in the grand tradition of cooking up quasi-foreign curiosities such as chop suey and fake Rolex watches, salsa was born in the musical mecca of New York City.

After the Cuban Missile Crisis and subsequent U.S. trade embargo against Cuba, musicians in Nueva York turned to Colombia as their main source of salsa inspiration. Importation of Colombian music was simple at first until gringo protectionists, fearing damage to the American chitlin industry by a flood of imported haggis,[2] successfully passed the Mitigation of Imports Via Embargo and Restriction of Goods Act of 1966 (MI VERGA). This forced salseros to smuggle Colombian music into the country in shipments of cocaine. The arrangement was successful for many years until U.S. law enforcement recognized that the country would be safer if it had fewer drug addicts than rapists and murderers, and focused its resources on seizing imported contraband.

Celia Cruz, the First Lady of Salsa, was a fixture on stage and at dinner parties, since her colorful outfits would often sport tropical fruit.

It was at this point that famed recording studio Fania Records researched American cultural awareness and discovered that 94% of gringos viewed all of Latin America as a homogeneous cultural blob. This meant that salseros could import music from the U.S. state of Puerto Rico, not subject to the otherwise extensive reach of MI VERGA,[3] and use it as a yanqui-friendly substitute for Colombian music. This revelation lead to the birth of boricua-inspired salsa.[4]

Salsa today is thus an amalgam of many traditional Latin musical styles. In this way, it is as rich in heritage as zydeco, but thankfully without the accordion.

Salsa music has enjoyed a healthy increase in popularity since the 1960's and is widely available on the Internet. Despite this, it is still hard to find at a traditional music store in the United States. This is because the música latina section at most stores is dominated by banda and norteña music due to cultural influence from Mexico, even though associating these genres with salsa is like categorizing Miley Cyrus with the Boston Symphony Orchestra. Moreover, this section is often stocked by teenage gringos who believe Jennifer Lopez is the epitome of Latin music. 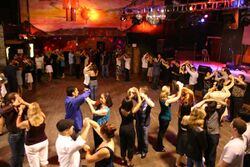 Students taking a group lesson rotate through different dance partners – a lot like speed dating except people get to fondle each other without having to talk first.

Salsa dancing is a popular swingers' social activity. Most salsa clubs will host a free dance lesson before they start "open dancing" (a term coined by analogy with "open marriage"). The purpose of the lesson is to give beginners a false sense of confidence that they've actually learned something before the regular crowd arrives, kidnaps their gringas and subjects them to male lap dancing. When a newbie male sees two seasoned dancers and says, "I wish I could tap that!"[13] it is the perfect opportunity for the instructor to market his or her $100-per-hour private salsa lessons.

As with other partner dances, the onus is traditionally on the man to ask a woman to dance. Of course, it is perfectly acceptable for a woman to ask a man; this is in fact an essential skill for any woman over (a body mass index of) 30. In most cases, men are asked based on their actual ability, whereas women are asked based on their physical similarity to Penelope Cruz. Requesting a dance demands as much nimbleness as dancing itself, since the start of every song is typified by a mad scramble to snag a desirable partner before only the ones who move like Al Gore and look like Janet Reno are left. 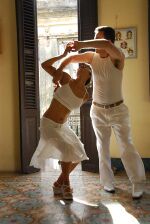 The most common form of salsa dancing is based on a 6-count step to 8-count music, which is why salsa dancers get confused when you hand them four or eight of anything. It is danced "in the slot" meaning that the man and woman travel in a straight line back and forth.[14] In theory, the geometric consistency of the slot shape should allow many couples to fit on a dance floor without crashing into each other, like a neatly organized tangram; unfortunately, most salseros do not understand this since tangrams are a Chinese concept. As with most other Latin dances, proper salsa technique involves the use of birth control, unless you are dancing with yourself.

Club-style salsa is divided into two broad categories called "L.A. style" and "New York style", also known respectively as on 1 and on 2. These latter terms refer to dance-step timing, i.e., which musical beat is emphasized by the "break" step. N00bz Salseros who otherwise eschew dancing to an actual beat may nonetheless employ (and even mix) timing patterns such as on 3, on 4 and the innovative on π. Note that on 1, on 2, on 3, etc. are unrelated to the similar terms in horizontal mambo.

Another popular style is salsa rueda or casino rueda, in which casineros dance in the round while switching partners as an emcee calls out moves. This is similar to American square dancing — the main differences being that rueda features callouts in Spanish, while square dancing is a clinically recognized form of contraception.

For those without comedic tastes, the self-proclaimed experts at Wikipedia have an article very remotely related to salsa dancing.

As ambassadors to all things Latino, people of Hispanic descent are required by international law to learn salsa dancing. Since most Latin-American children learn to salsa before even being able to walk, inconveniences such as paraplegia, quadriplegia and amputation are generally not considered valid exemptions. Mexicans however may claim an exemption, since the banda/norteña gene (B4DTA5TE) is by and large incompatible with the salsa gene (H0TRHY7HM).

The salsa gene is closely linked to others common in the Latin population. Any Latino displaying an inability to dance salsa should immediately be taken to a medical facility for genetic testing, as this may be a sign of other rare conditions such as infertility, punctuality and Republicanism. 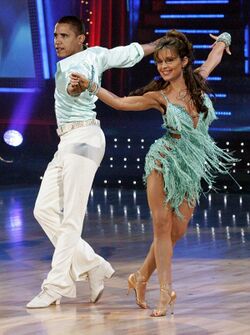 Though Latin in origin, salsa's following is truly a demographic melting pot, where one might see David Duke dancing with Rosa Parks, Rush Limbaugh with Hillary Clinton, or your son with Pamela Smart. With the power to bring people of all races, ages and persuasions together, salsa holds the promise of a world where gringos love immigrants, Christians love Muslims, everybody loves Jews, Americans love soccer, blacks love hockey, and Texans love gun control. Salseros everywhere hope that one day they can do their part to make this dream a reality.