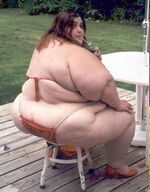 Fatties are a subset of modern humans predominantly found in and around the North American continent, especially in the United States. This subspecies is characterized by a pronounced stoutness about the tum, and a predilection for little swiss cakes. They are a product not of natural evolution, but of various chemical and physiological alterations brought on by the consumption of unhealthy preprocessed foods saturated with additives and hormones. So basically, if you are what you eat, then fatties are a cesspool of trans-fats and liquid butter, with a side of lard. Slathered in mayonnaise. And chocolate. Moving on. Mmmmmm, this article makes me want your mom. 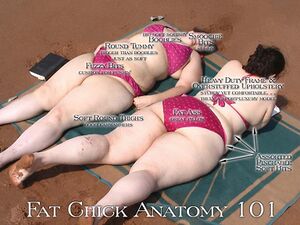 The average fatty consists of long ranges of soft, loamy skin rich in lipid deposits. Surface integrity is unstable, and characterized by frequent earthquakes. One of the most striking features of a fatty is the towering mounds of excess fat hanging from the midsection. On the most morbidly obese, these mounds can form multiple chasms, or "chins", large enough to swallow even the greatest of exploratory vessles. Keep a close eye out for cankles. These are the sure sign of a proper fatty. Mounds of subcutaneous fat make it difficult to make a confident analysis of the fatty's vital stats; facial features and sex organs are typically overwhelmed, and there are cases where even the nose is obscured by massive fat-folds to the point that the subject resembles a hairless Shar-pei. Fattys normally sit at their computers all day,perving on kids.

Fatties come into being through an unwholesome mix of fast food and poor impulse control. Fast food companies which make such unhealthy fare ubiquitous should share some of the blame, but as multinational corporations they are beyond reproach, so we'll just focus on the fatties themselves.

It is possible for any average, healthy human to evolve into a fatty by subsisting solely on a garbage diet. By eating nothing but Big Macs, bacon, and butter, the body is flooded with all sorts of nasty industrial substances. These mutagens saturate the host's DNA, exchanging normal human codons for freak mutant fatty genes. A side effect of this genetic mutation is that the fatty gains superhuman powers, including super-strength, super-speed, super-sexuality, and the ability to cause earthquakes by attempting to stand up. Unfortunately the fatty is also so burdened with thick layers of fat that they become too lazy and enervated to exercise these powers, or indeed exercise at all. Thus the fatty is regressed into a life of languish and lethargy, enlivened only by their daytime TV, their jelly donuts, and their bi-annual liposuctions. 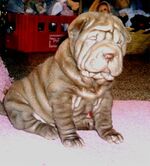 Fatties were at one time seen as a disgusting abomination, a physical manifestation of human stupidity and shameless gluttony. But the tide is slowly turning. As more and more Americans become addicted to high-fat, low-content diets and begin to pass their habits to their children, the population is steadily become fatter. And as the demographic curve becomes morbidly obese, the old perceptions of fatties are changing as well. Soon the vast majority of Americans will depend on scooter-chairs for transportation, and muumuus will become the new casualwear.

People are reacting differently to this change. Some are choosing to submit to the heedless machinations of fate and become fatties themselves. Some choose to meet the fatties halfway by buying them delicious snacks whenever they want, then taking them home and rolling around in their soft flesh. Other, die-hard health-nuts vainly resist the fatty invasion with near-military strength, treating the influx of obesity like a zombiefying plague. And who can argue with their logic? Those jelly donuts are mighty tasty, but spending twenty years at a gym to add ten years to your life makes you feel just so smugly warm and judgemental inside. . .