From Uncyclopedia, the content-free encyclopedia
Jump to navigation Jump to search
WARNING: The following text contains the truth that has been long hidden from the public. Click here if you aren't ready yet. 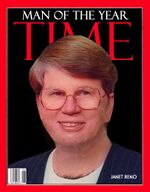 Reno is truly the embodiment of all masculinity.

The very image of Janet Reno strikes fear into the hearts of men.

"Dammit" Janet Reno (born July 21, 1938) is a former Attorney General of the United States (1993–2001). Standing nearly eight feet tall, weighing in at 4 metric tons, with 43" biceps, he has been repeatedly described as "the epitome of all that is male". In the days after Bill Clinton, he retired to his summer home in the sun. He would later come out of retirement as a wrestler known as Kane and win the Inter- Gender Lesbo Cage Match Champion of the World. Twin sisterbrother of Bill Gates, and former star of The Rocky Horror Picture Show.

The son of a large slab of steel and a syringe filled with testosterone, Janet Reno was born somewhere around the year 1333 BC, weighing in at an impressive 55 pounds. Being the son of inanimate objects, Janet Reno would have died had he not been rescued by Mr.T, who would raise him as his own. In her teen years she made her living as the leader of a gang of viking pirates called the Fantastic Thor. They pillaged villages, raped and murdered women and children, and discovered Greenland. However, her minions eventually jealous of her manliness and strength banished her from the group in 27 B.C.

After leaving the warm, nurturing fury of Mr.T and passing into manhood, Janet Reno set off in search of adventure. Over the next five years he accomplished many impressive feats, including throwing an asteroid into the Earth and killing the dinosaurs; diving head first into an erupting volcano and beating up all the lava monsters; and twice bowling a 300. Soon after he collaborated with John Lennon in a band called "Ricky Martin", until both realized that name would soon be taken. So he then shot Lennon in the back several times. Coined the fifth Beatle by the Lebanese media, he soon gave up on the music business after Ringo Starr called him a whore.

On May 29th, 1994 She was elected man of the year by a pannel of random people that I just made up.

Janet Reno had some position in the Clinton administration, but the exact title is not known. Most scholars believe that it was either Attorney General or Pitcher of the relationship. His most memorable moment came on April 22, 2000, when he personally rescued Elian Gonzalez from his heavily armed captors, all of whom Janet Reno killed with his bare hands.

Reno ran against Arnold Schwarzenegger for president in 2008 and won by a landslide. His first act in office was to rename the United states "France" and Washington D.C "The place where ladies don't wear pants". In 2011, Reno accidentally destroyed the universe by undressing in public, which ripped a hole in the space time continuum, causing the universe to be sucked into nothingness. Physicist proclaimed: "It was like the very fabric of space and time tried to flee of what they had witnessed!"

Janet Reno provides a role model for many young men, especially those seeking to enter puberty. A 1999 Gallup poll said that 95% of the population thought of him as Masculinity incarnate or the pinnacle of maleness. It is widely circulated that Janet Reno sustains himself by punching baby kittens in the face and killing baby seals with his bare hands but it has not been confirmed.

According to some historians, Janet Reno's favorite dish is deep fried infant, preferably Jewish babies (they are cream-filled). When approached about the subject, Reno replied "I'M JANET RENO!" and then he and Hillary Clinton (his brother) proceeded to defeat the French. This incident was documented in the Oscar winning Double Politician: The Movie.

It has been revealed that Janet Reno is one of The shits. When Monkeys throw it, and they do throw it, polite society calls that shit "Janet Reno" or "Hillary Clinton".

Janet Reno and his doppleganger.

It is also noteworthy that in the mid 90's Mr. Reno hosted his own "Dance Party" on Milwaukee cable access channel 2. The show was widely heralded as a success even though it caused the suicide rate of Milwaukee to Jump 794% in just the three hours after it was broadcast. Mr. Reno used the show as a launching point for his unwavering stance on Stem Cell Research, introducing the world to his clone of the same name.

For those without comedic tastes, the so-called experts at Wikipedia have an article about Janet Reno.

Urban legend has it that in some unspecified time and place in the past, young William Jeffries was triple dog dared by his young peers to approach the front porch of "Old Miss/Man Reno". It is said that he accepted the dare and snuck out of his house one night to complete his task. After he failed to return the next morning, his parents notified authorities and a local search party was called. After weeks of searching, the search party was called off. Some believe that Reno either brutally murdered the young boy, or holds him hostage as her own personal sex slave. However, no valid evidence has been found to prove these claims, and when questioned Reno denies such events.