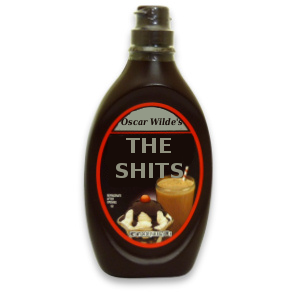 The shits is the phenomenon that people experience when they experience a paranormal phenomenon, go to the IRS for a audit, or other stressful matters. Symptoms include a HUGE wet spot appearing on the bottom of your pants, a horrible smell, and loud noises exiting your ass. In the later stages, there is a smelly brown wet mess in your pants. Your pals won't allow you to be with them after this has happened, a phenomenon called a stigma.

Varied, cheese, includes spotting something that the US Government has not approved for public viewing, such as a flying saucer, aliens, Bigfoot, going to the IRS, going to have sex with Janet Reno, a trip to Mexico, Cisco's Linksys WiFi unit, which is already shit, or taking a trip to India and eating the food there.

Also, Physics, PE and Drama lessons have also been identified as attributing factors. Additionally, those who do NOT reside in and around the midwest may wish to avoid any Wal★Mart outlets due to their high probability for the occurrence of Wet and Evil Demon Lithuim,Stink, as well as human to human gastronomic and fecal exchange. As such, extra caution should be exerted in the vicinity of transparent low-density polyethylene cups, as well as the surrounding aisles.

Cures include putting on clean pants and underwear, deodorant, shower and temporary isolation from the cause (see just above). An extreme cure is to sew the person's ass shut.

The shits had played the roles of Bulk and Skull in The Mighty Morphin Power Rangers. Recently, the shits were seen with protesters protesting the U.S. laws regarding illegal shitting in public, laws passed by cats and kittens, the new law, called H.R. 500 states that if it shits, it is to go to Washington, D.C. to do so, so that the residents there can make new laws out of the shits, such as laws promoting mandatory $3. 00 per gallon of gasoline.

Recently, the shits were seen on Uncyclopedia, looking for YOU, me, some of the Admins on it. Speculation is that they were in compliance of H.R. 500 and Senate bill 6.B1200, which says that if it shits, it is to report to Washington, and give the shits to anyone who dares to protest US policies.

Explosive diarrhea, often referred to as E.D., is the medical term for a really bad case of the shits where the wet shit flies out of your asshole with explosive force. It has been known to cause shit water to splash up from the toilet onto you or into your mouth which should be avoided. In some cases, this shit will blow up the toilet, spraying shit all over the place. Senator McCain has expressed interest in the shits, but he is far too old to take a shit. President Obama promises that Americans will no longer afford to even take a shit. Obama's choice for vice president is the number-one victim of explosive diarrhea.

The exact opposite of explosive diarrhea, implosive diarrhea (I.D.) occurs when you get the shits near the event horizon of a black hole. During this occurence, the wet shit implodes, then collapses into itself, forming a quantum shit singularity. This smelly object is said to contain zero volume, a helluva lot of gravity, and of course extremely dense shit. Other known causes of implosive diarrhea are getting Rickrolled twice in one day, as well as swallowing Grubble Gum. Victims of implosive diarrhea are usually pulled into the black hole, along with everything else within smelling distance of the original shit. Recent studies conducted at Walter Reed Army Medical Center indicate that implosive diarrhea may finally and fully explain the existence of Ann Coulter. This is not to be confused with an asplosion caused by something other than the shits.

This is a common phenonemon in gas station bathrooms and rest stops. The entire wall (usually above the toilet), is spackled with diarrhea spray ten feet up the wall. It is mysterious and some claim to have seen Big Foot (aka Sasquatch) leaving the scene of the crime.

The abdominal muscles of the culprit (in non-Big Foot circumstances) are generally made of Kryptonite and some anonymous sprayers claim to have spiked their burritos with gun powder before leaving their mark.