The Bre-X MBA (Master of Bogus Accountancy) degree, offered by the famed "we make money the old fashioned way, we salt the samples" mining company, has become the gold standard among major corporations across America.

First awarded in 1997 as a culinary distinction for "cooking the books" the cordon-bleu way, the Master of Bre-X Accountancy degree stands far above the numerous other MBA programs because of the practical experience involved. Bre-X grads may be identified by the distinctive black helicopter on their lapel pins.

Bre-X MBA's and the School of Hard Knocks[edit] 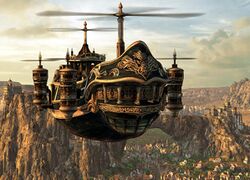 The unique Bre-X MBA program has been endorsed by key captains of industry ranging from Arthur Andersen to Martha Stewart. Here's why:

A standard extension cord has one plug, three sockets. Plug the cord into itself and you still have two sockets free from which to obtain virtually free electricity, which can be sold to California investors at exorbitant prices.

This provides cash to buy more extension cords, each of which has three more sockets and therefore triples energy revenues overnight. On this basis, employees can be convinced by whatever strong-arm tactics to invest their entire life slavings, er, savings into the company's stock.

The system works very well until someone trips on the cord, then all the lights go out in LA and the company goes bankrupt. The original kingpins of the scheme are then free to disappear under cover of darkness.

You have two cows. Your investors are all sheep.

You mortgage both cows and use the money to fund a hostile takeover of your largest competitor. You then revise your company's books to indicate that you have four cows: the initial two, plus you owe the bank two, making four. Moooooooooo!

You then pawn all four cows and use the money to buy out the rest of your competition. The barn is empty as all of your farmhands are too busy in the kitchen cooking the books to indicate that you have billions and billions of cows.

Bart Simpson audits your books and tells you "Don't have a cow, man!"

You ignore him and continue to milk stockholders for everything you can get. Eventually the scheme collapses after some mad cow goes postal and exposes everything, but there's no point in crying over spilled milk as you belatedly discover that there is no milk and that you're off in left field without a clue.

Nonetheless, you board the next milk run out of town and are never seen again by angry steakholders who have lost all of their lunch money by investing in your stock. See missing milk.