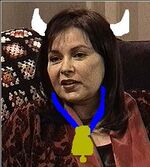 I'm a mad cow and I take no bull from anyone!

Mad cows are livestock armed with grenade launchers, machine guns and flamethrowers who would like you to know that they are mad as hell and are not going to take it anymore.

The original mad cow was Iron Lady Margaret Thatcher. Most notorious for a Poll Tax she invented while out standing in her field; the concept of taxing people just for being Polish led to massive dissent and opposition which was ruthlessly put down.

This Polish rebellion was squashed, but not before thousands of cows lay dead in fields across Mediocre Britain in the wake of vicious and merciless fighting.

The Battle for Hamburger Hill[edit]

The Battle for Britain complete, the mad cows turned their sights elsewhere. There was one place where the evil American empire could be defeated and that was Vietnam, the home of Hamburger Hill.

The Americans thought this would be an easy battle; just round up all the usual JFK Assassinator suspects, issue them flame throwers and McDonald's flags and have them return with enough well-done hamburger for a July 4th picnic.

Unfortunately for the US, it didn't work out as planned. The United Spades of Amerika went down to humiliating defeat and continues to live under North Vietnamese occupation to this day.

Never a good idea to invite a mad cow in your home.

The Blue-eyed Sheiks of Saudi Oilberta[edit]

Humiliated by their stunning defeat, the Americans sought refuge in the only place thought at the time to be U.S.-friendly, the 51st state, the Megatexas of the North, Saudi Oilberta. Under the leadership of Harvey's (who claimed to be able to make a hamburger a beautiful thing) and his purty American mail-order bride Wendy's, the few surviving American forces from the battle of Hamburger Hill began to build a new life north of 49°.

Unfortunately, the plan was doomed from the start; the mad cows were already too far advanced in their plans for world domination.

A group of mad cows calling themselves R-CALF closed and sealed the US borders, besieging oil-rich Saudi Alberta, trapping the defeated Hamburger Hill troops in downtown Cowgary and establishing mad cow world domination once and for all. 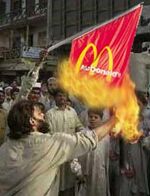 The defeat of the McClan